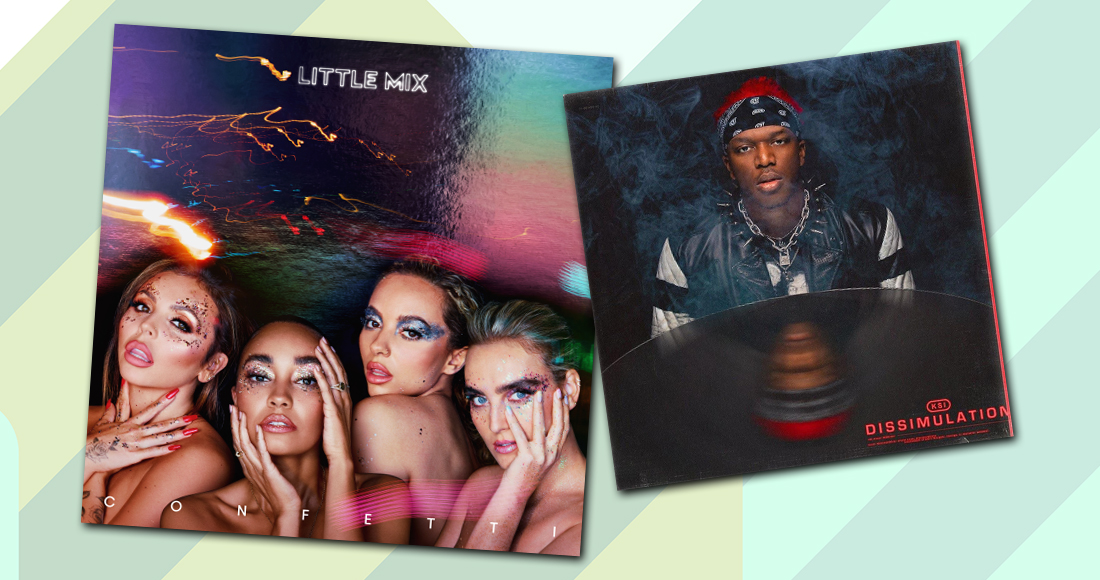 Most of the biggest musicians in the world have enjoyed the sweet smell of success that comes with hitting Number 1, but they've more often than not also had a whiff of disappointment when they've just missed out on the top spot. In some cases, an album can be a big seller across the globe, but only top the charts in one territory, which has happened in Ireland on occasion.

Little Mix are one of the biggest girl groups of the last decade; all six of their albums went Top 10 in the UK and Australia, and they have claimed Top 10 placements in each corner of the world in the likes of the United States, Canada, The Netherlands and New Zealand.

Ireland is actually Jade, Leigh-Anne and Perrie's most successful territory when it comes to chart-toppers, with three to their name. What's more, they had a Number 1 album in Ireland first, and 2015's Get Weird and 2020's Confetti were Number 1s exclusively in Ireland.

MORE: Global hits that only reached Number 1 on the Official Irish Singles Chart

Elvis Presley's If I Can Dream retained Number 1 in the UK to block Little Mix's Get Weird at Number 2, whereas Little Mix triumphed over fellow new entry Ellie Goulding's Delirium in Ireland by almost two-copies-to-one. In Confetti's case last year, it claimed the 2020's biggest week of sales for a Number 2 album, with Kylie Minogue claiming the top spot. The tables were truly turned in Ireland as LM outsold Kylie (who debuted at Number 4) by over 1,000 copies.

Another act who reversed his fortunes in Ireland than those in his native UK is KSI. The rapper lost out on Number 1 in May 2020 to The 1975 on the other side of the Irish Sea, but in Ireland, he streamed his way to the chart mountaintop. Despite Top 10 finishes in Australia, Belgium, Denmark and Estonia to name a few, Ireland was the only country Dissimulation reached Number 1.

KSI had promised to shave his head if he went to Number 1 in the UK, something he regretted saying. A Number 1 in Ireland couldn't quite convince him to get the shears out either.

I MEANT THE OFFICIAL U.K. CHARTS BUT THIS IS PRETTY COOL I CANT LIE. STILL WAITING FOR WHERE I PLACED... https://t.co/ujlDjp0ZDS

Led Zeppelin legend Robert Plant has enjoyed a storied solo career, picking up 11 Top 10 albums in the UK. Unlike the eight he had as part of Led Zep, none of Robert's solo efforts have reached Number 1, but one did in Ireland. More bragging rights for us!

In 2014, Robert's 10th solo studio album Lullaby and the Sleepless Roar was - well - slept on in the UK, going in at Number 2 behind Sam Smith's In The Lonely Hour, which secured a fourth week on top. Robert turned the tide in Ireland however, keeping upstart Sam at bay. The album had success across Europe, also finishing at Number 2 in Hungary and Norway, with Ireland providing the cherry on top of a successful campaign.

It is always interesting if a band manages more success in another country than their homeland(s), but that can be said for Northern Irish-Scottish group Snow Patrol with their 2008 album A Hundred Million Suns.

MORE: The acts with the most Number 1 albums since 2000 on the Official Irish Albums Chart

The collection shone its rays from the Number 2 spot on the UK's Official Albums Chart and on the secondary Scottish Albums Chart, taking up Top 10 slots in Australia, New Zealand, Switzerland, the US, Canada and The Netherlands for good measure. However it turns out the album did get to Number 1 on island of Ireland, bettering that week's UK chart-topper Pink by over 6,000 sales on the Official Irish Albums Chart.

Billy Joel has not one but two albums that were exclusively Number 1 in Ireland! Compilations The Ultimate Collection from 2000 and 2004's Piano Man: The Very Best of Billy Joel also both hold the distinction of topping the charts in years after their release. The former was a Japanese-only release in December 2000 before getting a global treatment with varying tracklists the following year. Piano Man was first released in November 2004, but was re-released with a DVD in July 2006.

For their chart-topping weeks in question, The Ultimate Collection dethroned Eva Cassidy's Songbird from the helm, while Piano Man went to Number 1 on July 28th, 2006 just a day before Billy played Croke Park in Dublin, retaining the top spot for a second week after the concert.

MORE: Acts who have scored two Number 1 albums in the same calendar year on the Official Irish Albums Chart

French electronic duo Air were on a hot streak in 2004 with Talkie Walkie. While their 1998 single Sexy Boy is one of their most popular, Talkie Walkie featured Alone in Kyoto, one of the signature soundtrack songs from the acclaimed 2003 film Lost in Translation.

Reaching Number 3 in France and Number 2 in the UK, Talkie Walkie took further steps in Ireland, securing the top spot by a comfortable 700 sales, and well ahead of Katie Melua's Call Off The Search at Number 10, while had held them off from the UK top spot.

Or should we say Chris Gaines! Garth Brooks shocked the world by releasing the album The Life of Chris Gaines as his fictional Australian alter-ego in 1999, using the character as an outlet to release pop music. The album was a strong seller in the US, debuting at Number 2. However, the record underperformed on the whole worldwide, with fans confused by the point of the Chris Gaines persona, deeming that the album may have done better if it was just billed as a Garth Brooks pop album.

That didn't stop it going to Number 1 solely in Ireland, capitalising on the success of Garth's string of successful albums earlier in the decade. In a twist of fate, Garth's one-time pop offering beat fellow rootsy musicians Christy Moore and Shania Twain to Number 1 that week.