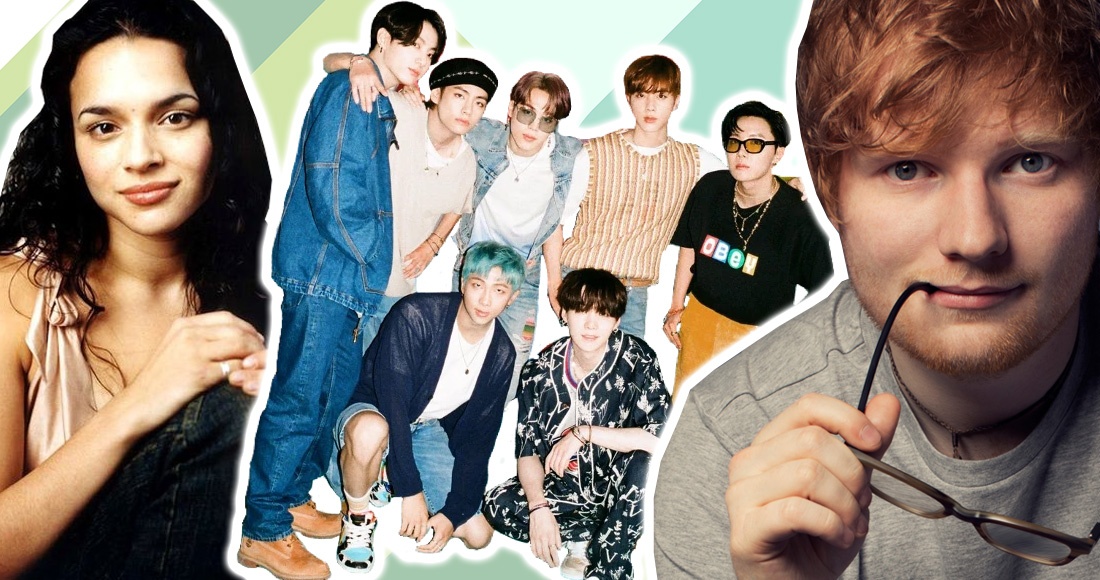 It's not often that an act can have two Number 1 albums in the same calendar year, but for a lucky dozen, that possibility has been a reality. Of the 12 artists and groups who have achieved this rare feat since modern chart records began in 1997, the latest occurring this past week.

Korean boyband BTS have reached the summit of the Official Irish Albums Chart twice in 2020 with their albums Map of the Soul: 7 and BE, both brand new releases this year.

This chart quirk can occur in a variety of ways, whether it being the uncommon result of releasing two albums in the same year like BTS, thanks to a live tour capturing the hearts of the nation, or the pretty much unheard of probability that anticipation for an act's new album sends music lovers buying their previous works. But all have been actualities on the Official Irish Charts, but who are the acts in this elite club?

Let's start with BTS then, whose unparalleled popularity in 2020 saw them score two Number 1s on the Official Irish Albums Chart. Only in four other countries did Map of the Soul: 7 and BE do the double including Korea, the United States, Canada and New Zealand, putting the Bangtan Ireland fan base firmly on the map.

MORE: The acts who had a Number 1 single and album at the same time in Ireland

In 2017, the success of Ed Sheeran's singles Shape of You and Castle on the Hill in January kicked off the year in a major way. News that his third album ÷ was on the horizon sent sales and streams of her previous album X soaring, and it returned to Number 1 for three weeks. Fast-forward to March and ÷ spent 10 consecutive weeks on top of the Official Irish Albums Chart, climbing back to the mountaintop for a further 13 non-consecutive weeks.

Before BTS, One Direction were the last group to claim two Number 1 albums in the same calendar year. In 2012, their debut album Up All Night reached the top spot in its 27th week on chart that May, having previously peaked at Number 3 the previous December. Later that November, the boys' second album Take Me Home debuted at Number 1 and spent six weeks ruling the Top 50.

Also in 2012, Bruce Springsteen scored a pair of Number 1 albums. Studio album Wrecking Ball spent three weeks in the chart penthouse, and then that summer, his 1995 Greatest Hits topped the charts for the first time following his back-to-back shows at the RDS Arena. Bruce is one only two acts to achieve two Number 1 albums in the same year twice, having also achieved it in 2007 with studio album Magic and live album Live in Dublin which was exclusively Number 1 in Ireland.

Radiohead have a long list of accolades, and a duo of Number 1 albums in 2008 is one that's pretty impressive. Their seventh album In Rainbows was a chart-ineligible pay-what-you-want download on initial release in October 2007, but its physical release was Ireland's first chart topper of 2008. Later that year, a hits collection The Best Of released without the band's consent by their former label also hit Number 1.

The band were reportedly "incensed" by the collection and described it as like "when you move house – you don't want to peer through the window and see what they've done with the wallpaper because it will only upset you." But it went to Number 1 and got them on this list today so, you know, silver linings.

Johnny Cash is also the only act with multiple posthumous Number 1s on Irish soil, and both went to Number 1 in 2006 - retrospective Ring Of Fire: The Legend of Johnny Cash and studio album American V: A Hundred Highways.

The only female artist on the list is Norah Jones, whose career beginnings are unprecedented. Her debut album Come Away With Me spent nine weeks at Number 1 in 2003. It then earned a 10th week on top in extra special fashion the following year when she replaced herself at Number 1, knocking off her second album Feels Like Home from the chart peak.

Westlife churned out albums every year from 1999 to 2007, often topping the charts in multiple years. Their 1999 self-titled debut returned to Number 1 in 2000 the same year their second album Coast To Coast hit the big time. Then in 2002, World Of Our Own from the previous year bounced back to Number 1, the same year that Unbreakable: The Greatest Hits Vol. 1 debuted at the top.

Finally the man behind Ireland's best-selling album of all time, David Gray, features on the list. His iconic album White Ladder from 1997 was a slow burner, coming into its own in 2000 when it spent six weeks at Number 1. By that point, David had another album ready to go, and Lost Songs capitalised on its predecessor's success and also hit Number 1.