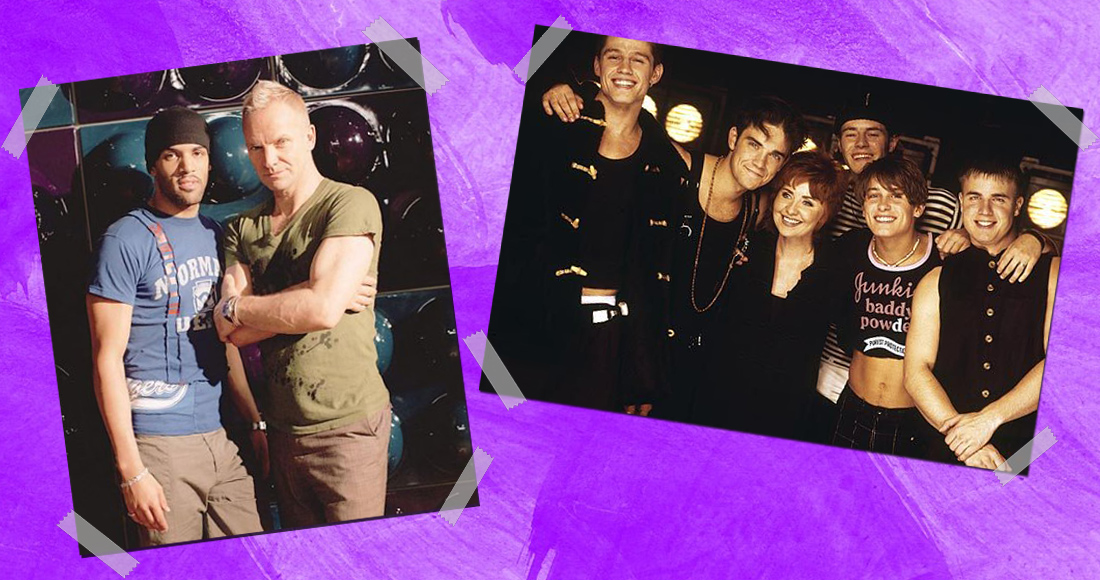 When pop music throws us a curveball by way of a surprise collaboration, the result can go one of two ways: so-wrong-it's-right, or so-wrong-they're-done.

We've previously looked back at some bold and bizarre collaborations, but seeing as there have been so many crackers combinations over the years, we only thought it right to highlight a few more. These are the ones that our crystal balls really didn't see coming...

Whether you love or loathe Coldplay, their success at evolving to keep up with the times can't be denied. It seems change is only a good thing for them - all seven of their studio albums have reached Number 1 on the Official Albums Chart.

The band's new EP Kaleidoscope includes the single Miracles (Someone Special), which features Big Sean - the Detroit rapper better known for teaming up with Kanye West, Jay Z and Justin Bieber than our fave UCL graduates. Very random, but come on, it works.

will.i.am is known thinking outside of the box, but this was perhaps one of his wackier projects to see the light of day. will and JLo? Nothing unusual there, but the addition of Mick Jagger  on the song and his ballsy command: "you can go hard, you can go home" is truly mind-boggling. The song was still a big hit, reaching Number 3 and becoming Mick's first solo Top 10 hit for 36 years.

Calvin Harris freshened things up in 2015 when he enlisted indie-pop sibling trio Haim for Pray To God. The song was a hit with critics, though unfortunately didn't resonate with the general public, stalling at Number 35. An underrated gem in Calvin's back catalogue if you ask us.

Take That and Lulu

It was 1993. Take That had just enjoyed their first UK Number 1 single with Pray, and the pressure was on to follow it up with a hit. The solution? A cover of Relight My Fire... featuring Lulu. Forgetting that the Scottish Eurovision entrant had last had a hit eight years earlier, Take That weren't (and still aren't) the collaborating type.

The only thing more surprising than the duet itself? Mark Owen's crop top in the video. And while on paper it sounded weird, the result was an instant classic, becoming Take That's second chart topper of what would be four in a row.

Who remembers this unexpected collab from 2003? Garage star Craig David found an unlikely friendship in Sting and they teamed on the single Rise & Fall, which peaked at Number 2 in the UK, just losing out on the top spot to Tomcraft's Lonliness.

One of those songs that evolved thanks to a chance twist of fate, dubstep behemoths Nero were working on a track called Reaching Out and wanted to sample Hall & Oates' classic single Out Of Touch. Little did they know that the producer of Darryl Hall's latest solo album was working in the room next door to their studio. The two parties organised a meeting and Darryl re-recorded his vocals from the popular track, plus additional new lines.

Reaching Out served as the sixth single from Nero's Number 1 album Welcome Reality and peaked at Number 92. A potential dance classic that slipped through the net?

One of the stranger elements to Queen Bey's phenomenal album Lemonade is Forward, Beyoncé's song that 'features' James Blake. We say features, but the song - which is only 1:19 in length - is predominately James' vocals. Addressing potential problems in her marriage, Forward is a melancholy moment before Bey sounds triumphant in the album's next track, Freedom. We wonder if the pair are still in touch?

Another dance act pairing with a legend, electronic music giant Chicane took a sharp turn to pop in 2006 when he paired with music royalty Sir Tom Jones. Stoned In Love was the result, a Number 7 hit that reinvented Tom once more following his huge comeback album Reload in 1999.

We're not sure anyone would have taken bets that this combo of four rappers and two rock groups would ever unite, but in 2016 this motley crew teamed up for Sucker For Pain, the lead single from the Suicide Squad movie soundtrack.

The mega-collab is a nod to the Suicide Squad's large unit of contrasting personalities, and having six fanbases led to chart success, peaking at Number 11 on the Official Chart.

MORE: Every song that peaked at Number 11 over the last 50 years

The late George Michael turned heads frequently throughout this career, and a duet with Sugababes' Mutya Buena was a popular example in 2006. George fans might have turned their nose up at the idea of him teaming up with a girl band star, but the results were stunning.

The soulful track is one of George's most overlooked singles, taken from his second greatest hits album Twenty Five. An atmospheric, sultry, chilled R&B number, This Is Not Real Love peaked at Number 15 in the UK.

In 2012, Elton teamed up with Australian dance duo Pnau for the collaborative album Good Morning To The Night. The album featured eight tracks that were all amalgamations of Elton songs from 1970-1976. The album's biggest hit single Sad (which peaked at Number 46) took parts of Curtains, Friends and Sorry Seems To Be The Hardest Word, stitched them together and added glossy production to create a laidback anthem for the summer.

The album was a success, landing Elton his first UK Number 1 album for 22 years. Will we ever get a follow-up? We can only hope.

In the list of 'songs that deserved to be Number 1', Bryan and Mel C's collaboration ranks somewhere near the top. Surprising at the time but a fairly sensible idea in retrospect, When You're Gone reached Number 3 on the Official Singles Chart,  but it claims the title as the best-selling solo single from any Spice Girl.

The re-recorded US version from 2005 is even more out there - it's Bryan Adams featuring Pamela Anderson. It doesn't come more surprising than that, does it?

Which unexpected collaborations have we missed? Tell us your favourites in the comments below: