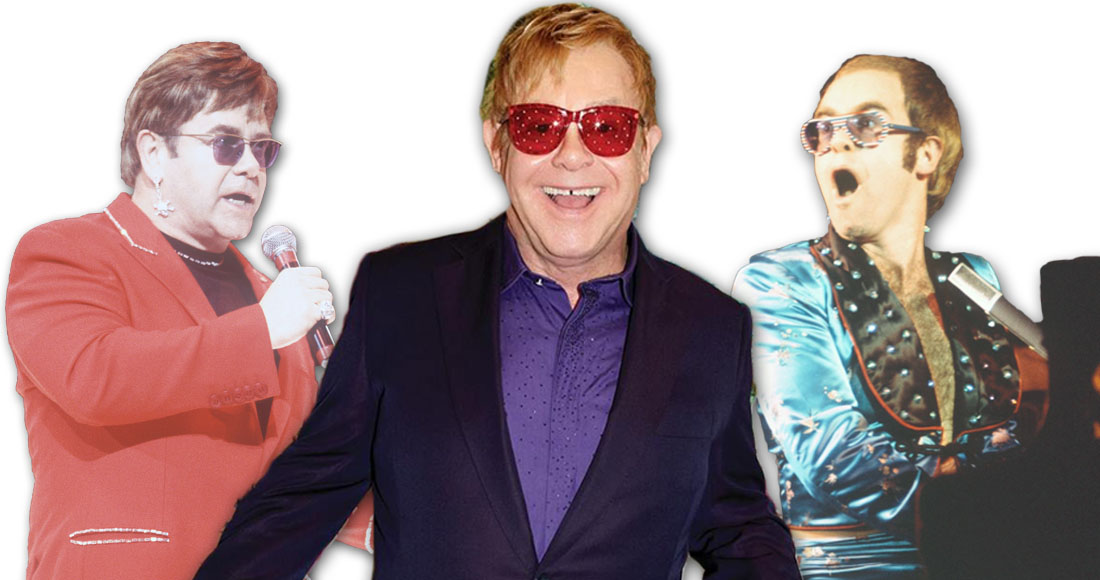 Famed as much for his legendary tantrums and unmissable parties as his music, pop's most vivacious knight Sir Elton John has just released his 32nd studio album Wonderful Crazy Night.

Since his very first hit Your Song in 1971, Elton has scored 7 Number 1s on the Official Singles Chart, from 29 Top 10s and a total of 65 Top 40 hits. He's also landed seven chart-topping albums and collaborated with some of music's biggest legends and pop's rising stars.

Not only that, but Sir Elton has also claims the honour of having the UK's biggest selling single of all time. His double-A side of Something About The Way You Look Tonight and Candle In The Wind 1997 – which the star performed at the funeral of Diana, Princess of Wales – has sold 4.93 million copies

A truly stellar music career that shows no sigh of slowing down, but when it comes to the digital age and sales from downloads, how do his classics hold up?

Elton's never been afraid to innovate and reinvent himself – we look at tracks old and new that have thrived since downloads were counted toward the Official Charts from 2005.

1: Tiny Dancer (Hold Me Closer) – with Ironik and Chipmunk

Elton’s biggest digital seller is the 2009 reworking of Tiny Dancer – retitled Tiny Dancer (Hold Me Closer) - by Ironik and Chipmunk. The original version of the track was featured on Elton’s 1971 album, Madman Across The Water, and is one of Elton's most loved tracks, despite never actually being released as a single in the UK.

2: Ghetto Gospel – with Eminem and Tupac

Released in the UK in 2005 the Tupac-led track track from Tupac’s posthumous 2004 album, Loyal To The Game. Reaching Number 1 in the UK, Ghetto Gospel was produced by Eminem, who added in samples from Elton’s 1971 track Indian Summer.

Like Tiny Dancer, Indian Summer is also taken from Madman Across The Water, and was also not previously released as a single in the UK. Ghetto Gospel was Elton's most recent Number 1 and spent three weeks at the top.

MORE: View all Tupac's hit singles and albums in the Official Chart archive

Sir Elton's very first hit single peaked at Number 7 upon original release in 1971. In 2002, a new version for Sport Relief saw the track go three better and peak at Number 4.

The romantic classic was famously covered by Ellie Goulding, who managed to take her retake higher than the original – she reached Number 2.

Despite never being released as a single, the original version of Tiny Dancer has a special place in people's hearts. It's been a radio favourite over the years, but found a new audience in 2015 when it was the soundtrack to a John Lewis advert.

Another legendary Elton John Track, Rocket Man reached Number 2 in 1972 and was kept off the top spot by glam band T.Rex with Metal Guru.

Rocket Man was covered by Kate Bush in 1991, but this time Elton wasn't outcharted – Kate's reggae reimagining of the track reached Number 12.

Obviously, every Sir Elton classic is notable in its own way, but when it comes to well-known tracks, Elton's festive effort Step Into Christmas comes in seventh, while his top seller Something About The Way You Look Tonight is his 13th biggest download.

Elton John's most downloaded solo chart-topper is 1990's Sacrifice. Elton's huge comeback Number 1 in 2003, Are You Ready For Love, is at 17.

Blue's version of Sorry Seems To Be The Hardest Word, which featured Elton, has sold more downloads than the original, which just misses his Top 20.

You can see the full Top 20 below: