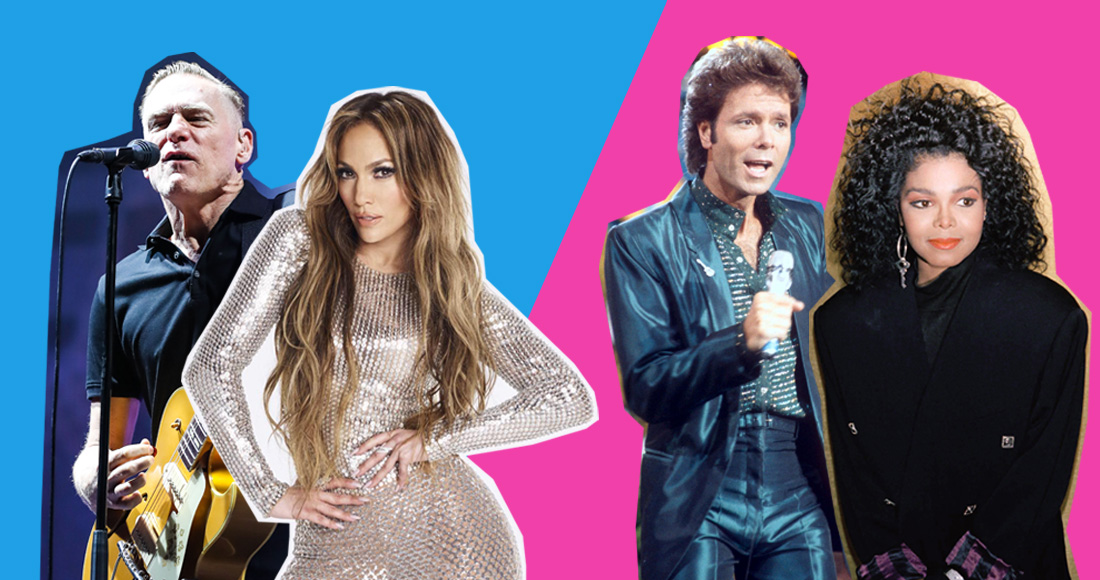 Everybody loves a good duet or a collaboration, don't they? You get two, or more, stars for the price of one, who might pick up an extra fan or two – plus they brighten things up a little.

While most collabs seem pretty logical – you can usually work out the thought process that brought these two artists together – others are… harder to get your head round.

We flag a few of the most unusual team-ups in pop.

Did *you* see this one coming?! Ahead of the release of his new studio album Shine A Light, Bryan teams up with J-Lo herself on ballad That's How Strong Our Love Is, which is based around an old Otis Redding song. "They said we couldn't make it," the pair sing, and while they're clearly talking about a couple's enduring romance, the lyrics could be a subtle nod to the haters who've written off their (very successful) pop careers again and again.

Heads certainly turned in 2008 when singer-songwriter James enlisted Nelly Furtado to duet on Broken Strings. Nelly had just left her folky beginnings behind – for the time being, at least – and moved on to slick Timbaland-produced R&B, scoring hits with sexy bops like Maneater and Promiscuous.

James was a little more subdued, but, like Sandy and Danny getting together at the end of Grease, it worked, and emotional midtempo Broken Strings went to Number 2. 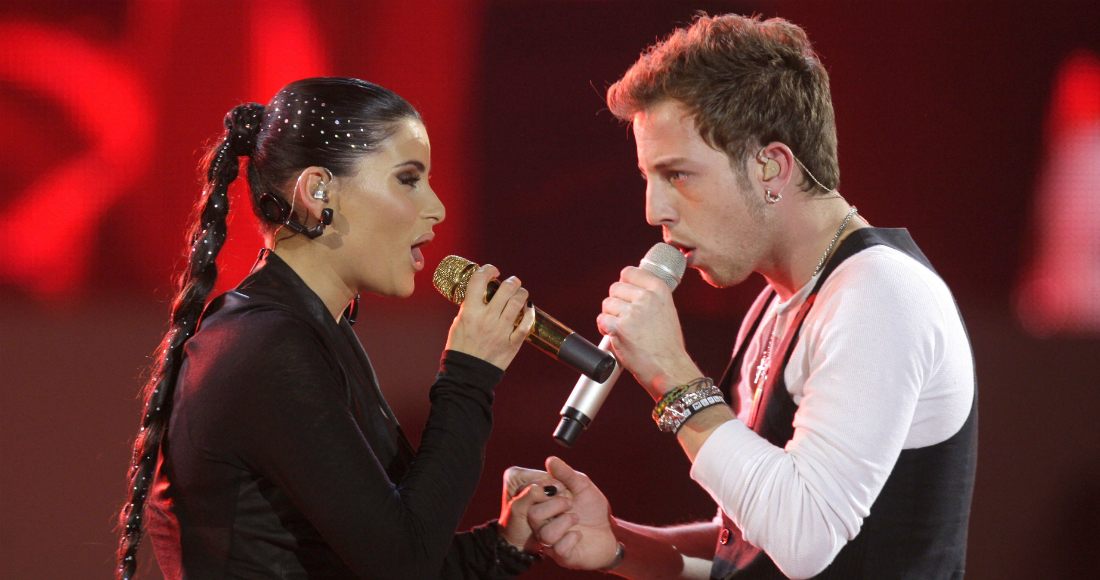 James had another go at an unexpected team-up in 2011, when he brought Jessie J on board to guest on Up and he recently joined forces with Joss Stone – it's been a while! – on My Love Goes On, from his new album You're Stronger Than You Know.

Metal and grime, historically, have only existed together in factories – until now. The pop world almost dropped its egg and cress sandwich when Linkin Park dropped surprise collaboration Good Goodbye, which featured Stormzy AND Pusha T. Fans and critics were divided, to say the least. What do you reckon?

Coldplay and The Chainsmokers

One of the big surprises at the 2017 BRIT Awards was an unexpected team-up between stadium gods Coldplay and dancefloor doyens the Chainsmokers. Their collaboration Something Just Like This peaked at Number 2 on the Official Singles Chart soon after. Bit when you think about it, was it that weird a collaboration? Coldplay have always had their disco side, and with Chainsmokers being one of the hottest pop acts of that time, it's only natural they'd collaborate.

Janet, the pop princess of a musical dynasty. Cliff, the veteran rock n roll poster boy who goes down a storm at the over-70s club in the community centre. You'd no more put them together than you would sausage and strawberries, or custard and swordfish. And yet, this did actually happen.

In 1984, around 18 months before she stormed the Top 10 with What Have You Done For Me Lately, Janet made her very first chart appearance on this duet with Sir Cliff, Two To The Power Of Love, which Janet originally sang with someone else when she starred in the TV series Fame. It wouldn't sound out of place over a romantic montage in a cheesy '80s movie – skipping along the Manhattan streets, sharing an ice cream, you know the drill – but sadly didn't make much of an impression and stalled at 83. View Janet Jackson's UK hit singles and albums in her archive

We have learned to expect the unexpected when it comes to Bey, given she likes dropping surprise albums all over the place, but some of the collaborations we really didn't see coming!  First there was her guest spot on Naughty Boy tune Runnin', which also featured Arrow Benjamin, peaking at 4, then a few months later, she lent her precious pipes to Coldplay's BRIT-nominated Hymn For The Weekend. In 2017, Beyoncé was at it again: first adding an incredible verse to J Balvin and Will William's Mi Gente, sending the track back into the Top 10, then she helped Ed Sheeran snare the Christmas Number 1 with her cameo on Perfect. Beyoncé and Ed broke the internet when they appeared together at the Global Citizen festival in 2018, Ed in his trademark low-key clothes and Bey absolutely bringin' it as usual:

When you think of Taylor and a 1D connection, you automatically think Harry Styles, and their relationship that inspired some of her huge album 1989. Bit of a surprise, then, to see Taylor team up with now-solo Zayn, on the second Fifty Shades sountrack . We're sure they both had more important things to talk about, but we bet Harry's ears were burning. I Don't Wanna Live Forever reached Number 5.

Enrique and Whitney didn't meet when first recording Could I Have This Kiss Forever, which started out as a ballad on Enrique's self-titled English-language debut. When the track was earmarked as the lead single from Whitney's Greatest Hits, the pair finally met in a studio and re-recorded it

Whitney tries out her Spanish, Enrique looks like he can't believe his lucky and the result is strong, if we're honest, peaking at Number 7. Whitney was on a roll with the duets – her previous single was the even more 💯 If I Told You That, with George Michael.

Oh look – Enrique again, with an even less obvious collaborator. In 2004, Kelis was enjoying a career resurgence with the ballsy Top 3 Milkshake from third album Tasty. How odd, then, that sandwiched in between that banger and the equally incredible next single Trick Me was… this one.

We're not saying it's not a good song, because it is. But it felt like Kelis had been on her way to kick someone's arse, as is her thing, but wandered into the wrong studio by mistake so thought she might as well record a duet while she was there. It reached Number 5.

Another Level and Jay Z

Another Level, the briefest of bright flames in the UK boyband market in the late '90s, were only too happy to give rising star Jay-Z a helping hand and a feature on the remix of their hit Be Alone No More. Whether Another Level can claim sole credit for Jay Z's megastardom is up to you. We wonder if Beyoncé's even heard this one? Does Dane ever go for a drink with Jay? We need to know.

Blue were huge back in 2002, and when you're big, what do you really want to be? Bigger! The band covered Elton John's classic Sorry Seems To Be The Hardest Word but didn't stop there: they got him to sing on it as well.

Blue nipped round to Uncle Elt's and caught him at the piano and the rest is history. We reckon Elton must've been thrilled this new version managed not only to break the Top 10 – which the 1976 original did not – but actually went to Number 1. It was a bittersweet victory for Blue; this third chart-topper was their last.

Blue liked so much the idea of covering a classic song, and inviting along the original artist to witness it in horror, that they did it again, with Stevie Wonder on Signed, Sealed, Delivered in 2003.

This cover of the Phil Collins hit was originally a Mariah solo recording from her album Rainbow, and while Westlife were knocking Number 1s out of the park, they wanted a big star collaboration.

Despite the video being set in a studio, Mariah didn't actually re-record her vocals for the new version – why mess with perfection – but it still became Westlife's sixth consecutive chart-topper and Mariah's second Number 1 altogether. You'd think Mariah has no recollection this song ever existed, but she actually sang it in the UK on her recent Sweet Sweet Fantasy Tour.

Way before he was adding a bit of zing to Beyoncé's Lemonade, White Stripes' Jack White was one half of another unexpected collab. More at home on soulful ballads and R&B jams, Alicia Keys nipped out from behind her piano to team up with Jack on the theme tune to James Bond movie Quantum Of Solace, Another Way To Die, which hit Number 9 in 2008.

Sigma and Take That

Dance duo Sigma had long been fans of Take That, and after a chance meeting at the BBC Music Awards, they both expressed an interest in working together. As luck would have it, fate was about to deal a winning hand, as Sigma's Cam explains: "It just so happens that there was a tune floating around that we had been involved with which they did a version of. They sent it to us, we really liked what they did and the rest is history!" Cry reached Number 21 in the Official Singles Chart. 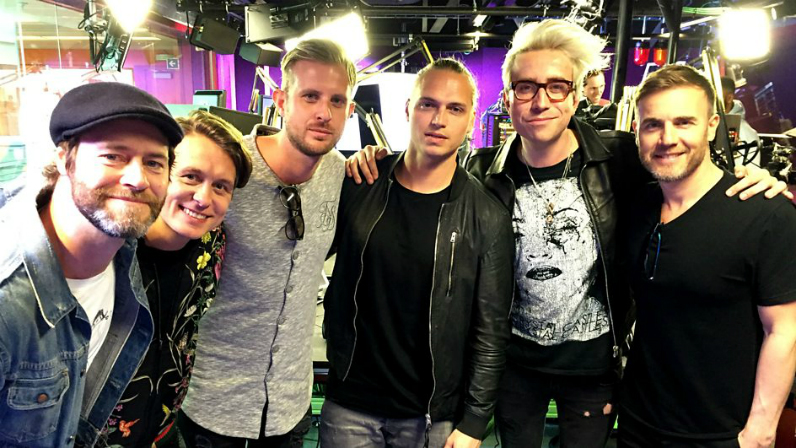 Sigma and Take That + Nick Grimshaw – the next big man-band? Let's make it happen! (BBC)

At the BRITs anything can happen. Perhaps the most unexpected BRITs collab of them all was between Glasgow pop-rockers Texas, led by Sharleen Spiteri, and NYC hip-hop outfit Wu-Tang Clan.

Texas's huge hit Say What You Want was significantly reworked with added bite from Method Man and released as a single, hitting Number 4 in 1998. It kind of works in a raw, mashup kind of way, although it must've been quite something for the live audience.

Dizzee Rascal and Florence + the Machine

Reworking Florence's cover of The Source and Candi Staton's You Got The Love to leave some space for Dizzee to work his magic, the collaboration was the standout performance of the 2010 BRITs. It even outpeaked every previous release of the song, reaching Number 2, kept at bay from the top by the Helping Haiti charity ensemble, and Jason Derulo. 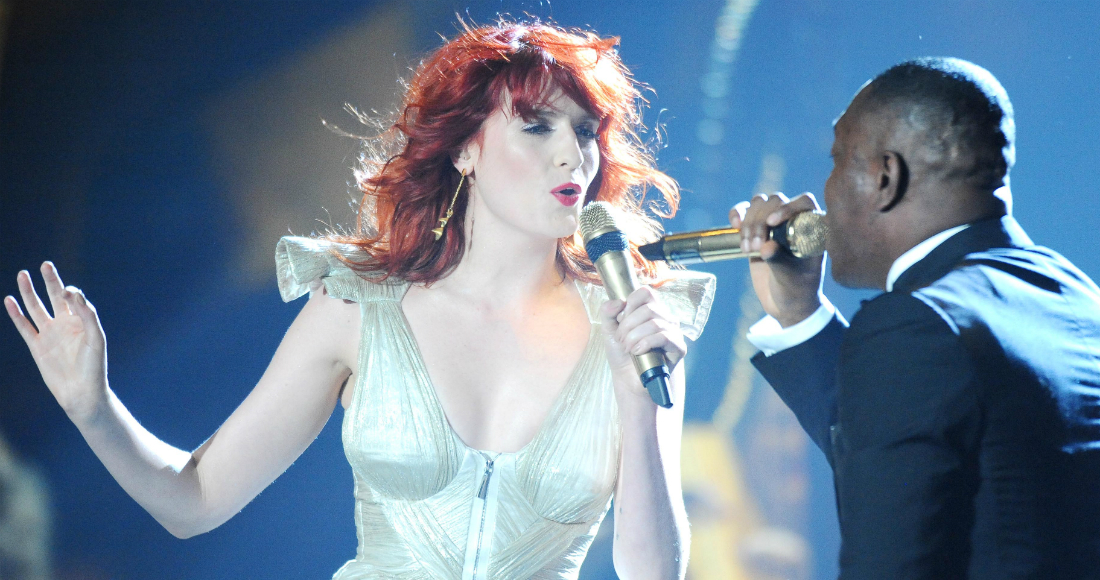 Is this the original surprise collaboration to beat them all? Walk This Way not only brought rap and rock together, it became one of the first hip-hop songs to find international success.

Walk This Way reached Number 8 in 1986 and was a breakthrough hit here for both acts, but it would taken an even mightier collaboration to take it to Number 1 – Sugababes and Girls Aloud teamed up for a punchy, poppy version and hit the top in 2007.

Run DMC would be part of another unusual partnership in 1998, when a Jason Nevins reworking of It's Like That spent six weeks at Number 1, selling over a million copies.