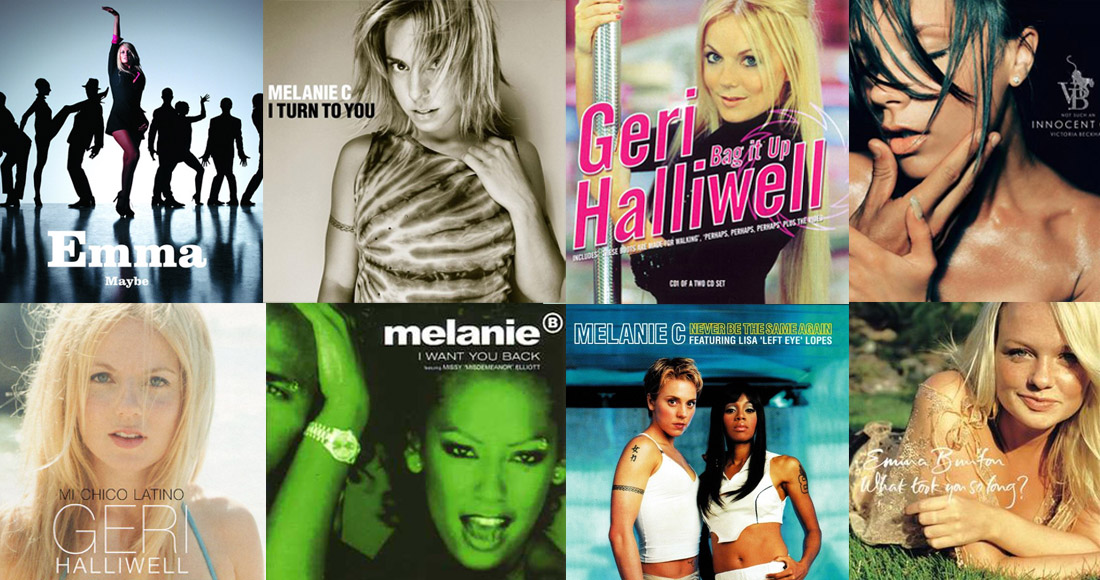 By December 2000, the fate of Spice Girls was pretty much sealed. Geri had left, their third album Forever hadn’t been a huge success, and the magic seemed to have gone. Still, the announcement of their indefinite hiatus was a blow for many fans.

However, there was a glimmer of light amid all the darkness: the reason for the hiatus was so they could concentrate on their solo careers – and a flurry of singles followed shortly after.

The solo Spice careers have been, it’s fair to say, patchy – they were never going to be as strong individually as they were together - but each member has racked up multiple Top 10 singles, with all except Victoria scoring at least one Number 1.

With Geri having recently returned with Angels In Chains, a charity single dedicated to her close friend George Michael, Official Charts thought it was about time we delved into the stats, ranking each member’s solo efforts and – wait for it – combine them together to bring you the Official Spice Girls Solo Chart.

First up, let’s take a closer look at each Spice Girl separately…

Mel B kicked off her solo career two years before the group split with I Want You Back; a collaboration with Missy ‘Misdemeanor’ (as she liked to be known at the time) Elliot. It was pretty much everything you could want from a Mel B solo single: slick, futuristic R&B with a super spenny Hype Williams video to boot.

She followed it up a year later with Word Up under the moniker Melanie G after her marriage to dancer Jimmy Gulzar. It didn’t make quite the same impact, peaking at 13, but Top 5 hits soon followed with Tell Me (2000) and Feels So Good (2001).

Mel had another crack at solo stardom in 2013 with For Once In My Life, which featured Mel making out with herself in the music video (obviously). Still, she never quite managed to out-peak I Want You Back, which ranks as her best-selling single with 226,000 sales. Feels So Good finishes second (142,000), and Tell Me is third (109,000). Full ranking below:

Mel C has enjoyed a long a successful career post-Spice Girls, racking up 12 Top 40 hits to date. Like Mel B, she enjoyed a taste of solo stardom before the group’s split, featuring on Bryan Adams’ When You’re Gone in 1998. The song, which saw her take on a more pop-rock route compared to the Spice sound, peaked at 3 on the Official Singles Chart and ranks as her best-seller (747,000 sales).

When it comes to Mel’s headline singles, it’s her cuts from her debut album Northern Star that finish top of the pile. Her first Number 1 Never Be The Same Again ft. Lisa ‘Left-Eye’ Lopes finishes second with 429,000 sales, followed by I Turn To You (384,000) and Northern Star (216,000).

See the full ranked list of Mel C’s single below. It’s worth noting that we’ve omitted a few songs that weren’t given a UK release, including Rock Me, which was released in Germany as the theme for TV coverage of the Women’s World Cup.

Again, Emma opted for a collaboration before embarking on a proper solo career, teaming with London electronic duo Tin Tin Out on What I Am, which peaked at Number 2.

Just one of Emma’s ten solo singles has missed the Top 40 - 2007’s All I Need To Know topped out at 60 – while seven reached the Top 10. See the full list ranked by sales below:

After leaving the Spice Girls in May 1998 (and the world in bits), Geri kicked off her solo career with a bang the following year with the sassy and suitably ridiculous Look At Me. The track debuted at Number 2 after a fierce chart battle all week with Boyzone’s You Needed Me, shifting 142,153 in its first week compared to Boyzone’s 142,901. So close. Look At Me ranks as Geri’s fourth best-seller (326,000).

Geri held the record for most UK Number 1 singles for a female artist for nine years, until it was matched by Rita Ora’s I Will Never Let You Down in May 2014. The record is now jointly held by Cheryl Cole and Jess Glynne, though Geri still holds the claim to manage four consecutively.

Below are Geri's singles ranked by sales (it's worth mentioning her song Half Of Me wasn't registered as a single in the UK):

Having contributed little in the way of lead vocals in her Spice Days, Victoria seemed the most reluctant to give a solo career a go. However, with the help of Another Level’s Dane Bowers(!) and garage production duo True Steppers, she came sprinting out of the starting blocks with Out Of Your Mind, which scored the highest first week sales of any solo Spice track.

The unlikely collaboration landed at Number 2, losing out to Spiller and Sophie Ellis-Bextor’s Groovejet (If This Ain’t Love) after a much publicised chart battle. Still, it’s Vic’s biggest solo single with a healthy 400,000 sales to date.

Her solo career may have been short, but it was certainly sweet; all four of her singles landed inside the Top 10, bowing out on a high in 2003 with double A-side release This Groove/Let Your Head Go, which peaked at Number 3. There's a good chance it could have finished second on her solo chart, but the track's not been available to download or stream in years. So Victoria. Here’s how they rank in order of sales:

Right, ready for the all-time chart? Here are all the Spice Girls' solo singles, ranked in order of sales. As you can see, Mel C and Bryan take the top spot, followed by Geri's It's Raining Men.