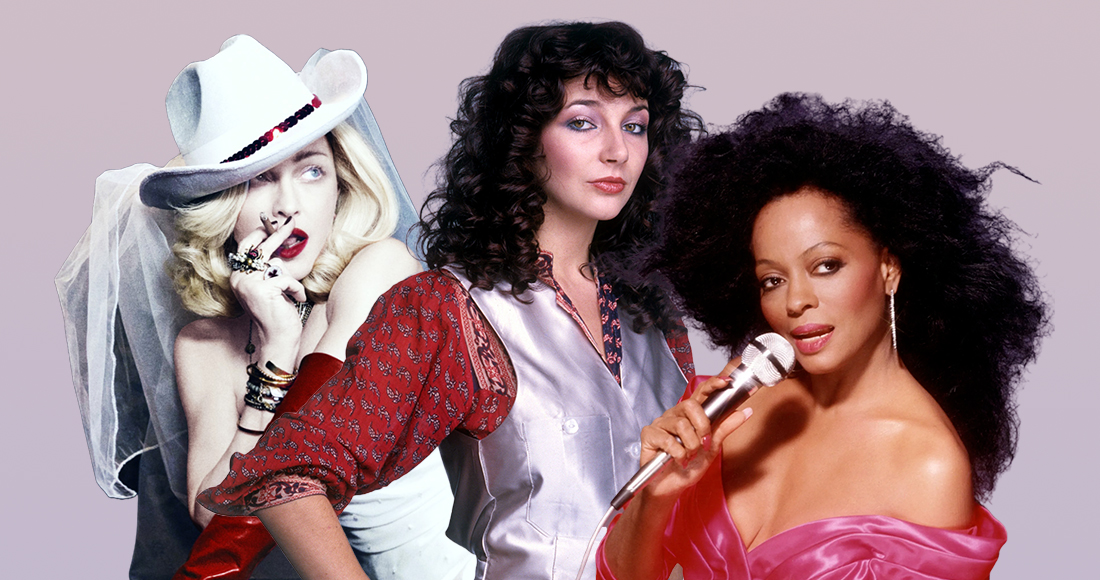 Sometimes, it's all about playing the long-game.

The great thing about pop music is that - although it may seem like it - songs and artists rarely dip out of fashion forever. With the recent exciting chart journey by Kate Bush, which ended with the auteur gaining her first UK Number 1 single in 44 years, here are some of the biggest acts to have had several years, if not decades, wait for another Number 1.

MORE: The chart history of Running Up That Hill

Definitively proving that if a single sounds this much like a Number 1 single then one day it probably will be...Kate Bush had to wait 37 years for the world to finally catch on to the magic of her magnum opus, Running Up That Hill. But boy, was it worth it when they did. Featured in the new season of Stranger Things, Running Up That Hill was Kate's first UK Number 1 single in 44 years - since her strange and malformed debut Wuthering Heights became the first song self-written by a female artist to reach Number 1.

It was June 2000. Kylie Minogue hadn’t had a UK Number 1 single in over a decade. The Australian was readying new music after her last release Impossible Princess “didn't exactly sell truckloads of albums” – her words not ours – and it felt like her pop princess crown was slipping slightly as Britney Spears and Christina Aguilera emerged on the scene. But oh was she going to bounce back in a major way.

Along comes Spinning Around, a glittery disco-pop banger that was originally intended for Paula Abdul in a very different form (read our interview with Spinning Around producer Mike Spencer). After Paula’s album was shelved, Kylie was offered the song, and it would kickstart quite the commercial comeback for her. Paired with those gold hot pants, Kylie stormed to Number 1, ending her 3808-day drought from the top spot.

Spinning Around kicked off a run of 14 consecutive UK Top 10 singles for Kylie, the longest of her career, and was followed by two further Number 1s Can’t Get You Out Of My Head and Slow. Kylie has now been without a Number 1 single for over 16 years, but if anyone knows a thing or two about a reversal of fortunes, it’s our Kylie.

You thought waiting a decade for a Number 1 was long? Try 42 years, three months and 15 days. That’s how long it was between Tom Jones’ Green Green Grass of Home hitting Number 1 in 1966 and his next chart topper, charity single (Barry) Islands in the Stream, reaching the summit in 2009.

Sir Tom teamed up with Gavin & Stacey stars Ruth Jones and Rob Brydon for a Comic Relief cover of Kenny Rogers and Dolly Parton’s country classic. In doing so, the Welsh legend claimed two chart records; he officially became the oldest living person to claim a chart-topping single in the UK aged 68, and until 2022 held the record for the longest time between credited Number 1 singles.

After a mixed critical response to her albums ARTPOP and Joanne, Lady Gaga tried a different tack, announcing she would star in a reboot of the movie A Star Is Born alongside Bradley Cooper, which would feature new songs. It gave her the opportunity to explore a more country-blues sound, and the result captivated both Gaga fans and the wider public.

Everyone was talking about A Star Is Born. Lead single from the soundtrack Shallow went on to win an Oscar for Best Original Song and marked Lady Gaga’s first UK Number 1 single since Telephone. Gaga wouldn't have to wait long for another, however - disco-tastic banger Rain On Me with Ariana Grande became her sixth UK chart-topper in the summer of 2020.

MORE: Lady Gaga's most popular non-singles from each of her albums revealed

Leo Sayer may be small in stature but he made a seriously big return to Number 1 on the Official Chart. A whopping 29 years after When I Need You ruled the roost in 1977, Thunder In My Heart Again, a dance remix from Meck of Leo’s Number 22 hit of a similar name (also from 1977) spent two weeks at the top of the UK charts in February 2006, with Leo as a featured artist. It was a much better idea than his stint on Celebrity Big Brother.

The Tide Is High but Blondie held on… to hope that they would get another Number 1, and they did some 18 years, two months later. You would have been forgiven for thinking Blondie wouldn’t top the Official Chart again; after doing it five times in the seventies and early eighties, they’d had a great deal of success. But then Maria arrived. The track, skilfully arranged to put a turn-of-the-century spin on their pop-rock sound, gave Blondie their first chart topper since 1980’s The Tide Is High in February 1999.

MORE: Artists who scored multiple Number 1s in a year

“What are you looking at?” Well between May 1990 and February 1998, Madonna wasn’t looking at any Number 1s. The Queen of Pop scored 19 Top 10 singles in that timeframe, but a chart topper had alluded her since everyone was throwing shapes to Vogue at the start of the decade. That was until March 1998.

One of Madonna’s most striking singles in her back catalogue, Frozen was the ticket she needed to ride back to the helm of the Official Chart. All-in-all, Madge’s big freeze from Number 1 lasted 2884 days. Madonna’s current stint without a Number 1 has now surpassed that at a little over 12 years, but perhaps Madonna can pull a Cher…

There was almost 26 years between Cher’s 1965 chart-topping debut I Got You Babe with her then husband Sonny Bono and the 1991 Number 1 The Shoop Shoop Song (It’s In His Kiss). Those 9376 days between both songs first reaching the top spot was the longest a female artist had ever waited for another Number 1...until Kate Bush came along, of course!

A song’s usage in a movie was the reason for The Righteous Brothers’ first Number 1 for 25 years. In 1990, their rendition of Unchained Melody (a song that has been covered approximately 846,000 times) was used during key moments in blockbuster romance Ghost, a combination that still tugs on the heart strings as strong today as it did thirty years ago.

Ghost’s popularity led to Unchained Melody being re-recorded by Bill and Bobby, becoming the best-selling single of 1990 and their first chart topper since 1965’s You’ve Lost That Lovin’ Feelin’. The Righteous Brothers are one of three acts to sell over a million copies of Unchained Melody alongside Robson & Jerome and Gareth Gates.

MORE: Every song to sell over one million copies on the Official UK Chart

Only one other female solo artist has waited a decade or more for their next Number 1 like Cher and Kylie, and that’s Diana Ross. The legendary Miss Ross claimed her first UK chart topper in July 1971 with I’m Still Waiting. True to the song’s name, Diana held her breath for 14-and-a-half years until Chain Reaction climbed to Number 1 in March 1986.

If Britney Spears had any frustrations at not scoring a UK Number 1 in almost nine years, she did a scream and a shout and let it all out in 2013.

Britney’s collaboration with will.i.am Scream & Shout bopped to the top of the Official Chart in January 2013, eight and-a-half years after her last Number 1, since Everytime in June 2004.

MORE: Acts with the most Number 1 singles on the UK chart