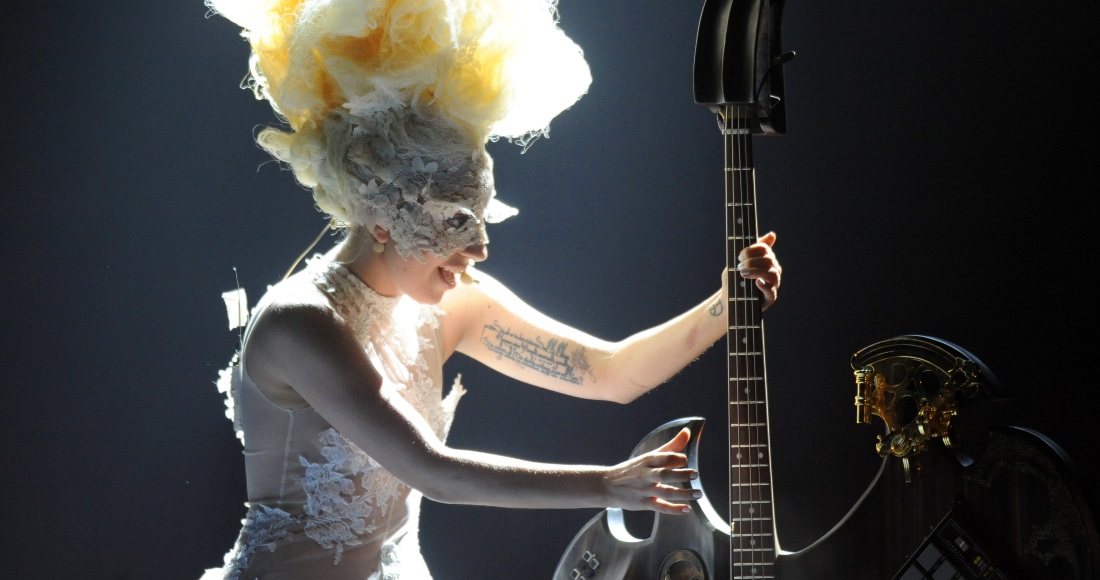 As we said goodbye to the Noughties, the 2010 BRITs was also saying farewell to Earl's Court – the iconic venue was set to be bulldozed and the ceremony would move to the O2 Arena from the following year.

But the greatest and wildest of the music biz certainly saw the place off in style. Presented by comedian Peter Kay, BRITs 2010 was the 30th edition of the show, and included some special awards for British Album of 30 Years and, even more excitingly, Best Live Performance of 30 Years.

The show opened with Lily Allen descending from the sky on the back of a huge black rocket, performing her second Number 1 single The Fear. Along with Lady Gaga, Pixie Lott, JLS and Florence and the Machine, Lily had the most nominations with three nods – would she go home empty-handed as she did in 2007? (Spoiler: no.) 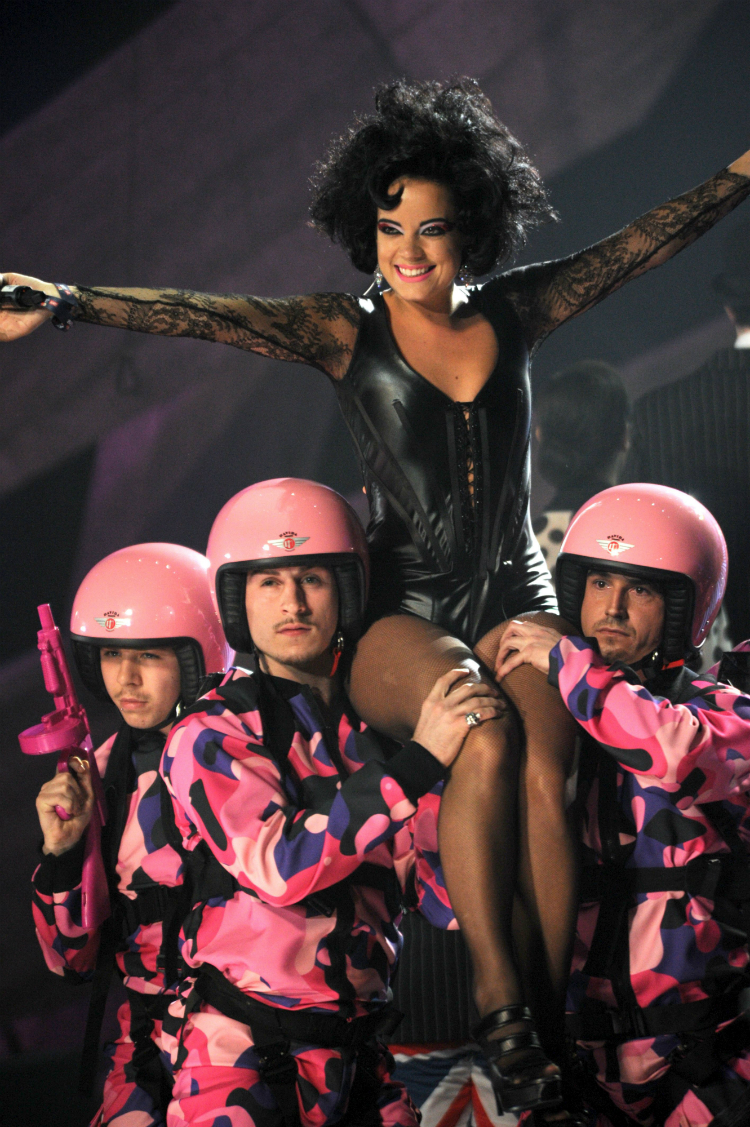 Lily had NO fear with her pink parachutists. Image: Richard Young/Shutterstock

Samantha Fox, who co-presented the anarchic 1989 ceremony that has gone down in TV folkore as a camp classic, presented the Spice Girls with the best live performance of the last 30 years for their showstopping, Union Flag dress-featuring routine to Who Do You Think You Are from 1997. Mel B and Geri represented the rest of the band.

Onto the male awards next, and British winner, presented by Andy Serkis, who at the time was starring in Ian Dury biopic Sex & Drugs & Rock & Roll, went to Dizzee Rascal – the rapper had notched up three huge Number 1s in the last year, kicking off with the Calvin Harris collab Dance Wiv Me.

JLS performed Beat Again before Mel B was whisked back on stage to present the International Male to Jay-Z, who thanked the Spice Girls for inspiring him. Oh yes!

The award for British Album of 30 Years was next, with Slade frontman Noddy holder announcing Oasis's second album (What's The Story) Morning Glory as the winner. Only Liam Gallagher came to accept the award – the band had broken up the previous year after a series of rows, including one where Liam allegedly threw a plum at brother Noel.

British group nominees Kasabian took to the stage with Fire, followed by Geri Halliwell returning to hand JLS the award for British Breakthrough, beating La Roux and Florence and the Machine, and then… it was time for Mother Monster.

Lady Gaga was deeply affected by the death of her friend, the designer Alexander McQueen, and dedicated her emotional, raw, and fairly sparse performance of Telephone to him, before switching up a gear for Dance in the Dark, both songs taken from The Fame Monster.

Critics' Choice had already been announced, of course, as is custom, but winner Ellie Goulding's time to shine came when Courtney Love officially presented her with her statuette. Kasabian took the British group gong from Idris Elba, before Lady Gaga won her first award of the night for International Breakthrough. 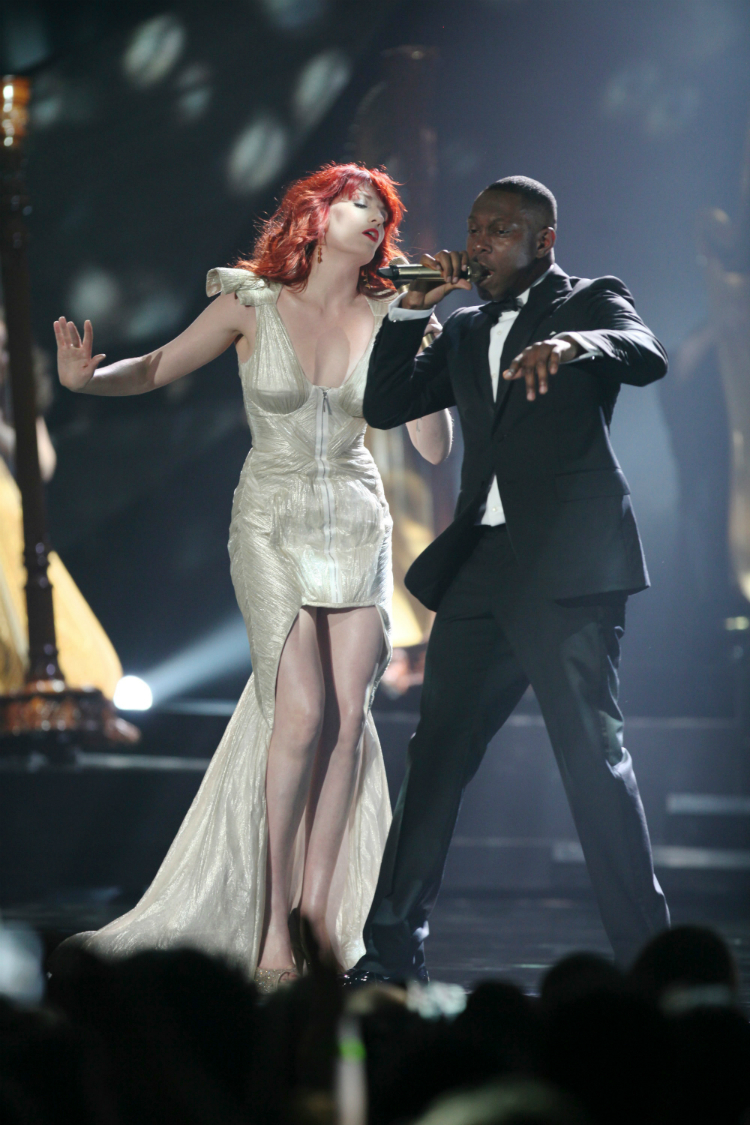 Flo and Diz do the biz. Image: Andy Paradise/AP/Shutterstock

It's not the BRITs without a medley, and on mashup duties this year was Florence and the Machine with Dizzee rascal, who performed a new arrangement of their cover of The Source feat Candi Staton's classic You Got The Love and Dizzee's Dirtee Cash. Renamed You Got the Dirtee Love, it was a huge hit, peaking at number 2 the weeks after the show.

TV presenter and chat show don Jonathan Ross dressed up as a rapper (no one knows why) to present the award for International Female, which was claimed by Lady Gaga, her second award of the night, and British Female was presented by Dame Shirley Bassey went to Lily Allen, who by now was wearing a big orange wig. Well, why not? When you're a winner, you can do what you want! 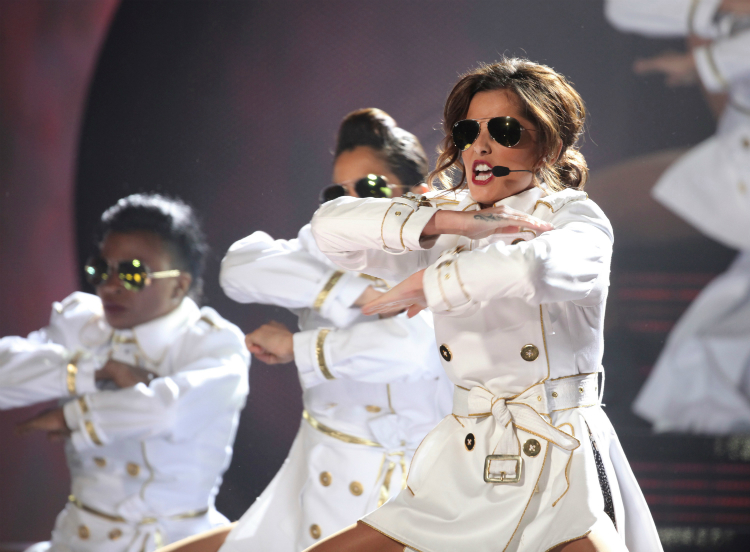 Spoiling for a fight, it's Cheryl. Image: Andy Paradise/AP/Shutterstock

Former Girl Aloud Cheryl Cole (as she was then) made her solo BRITs debut with million-selling Fight For This Love, wowing the crowd with a costume change halfway through the performance. JLS then won the British Single Award for their debut track Beat Again, their second win of the night – it was emotional! 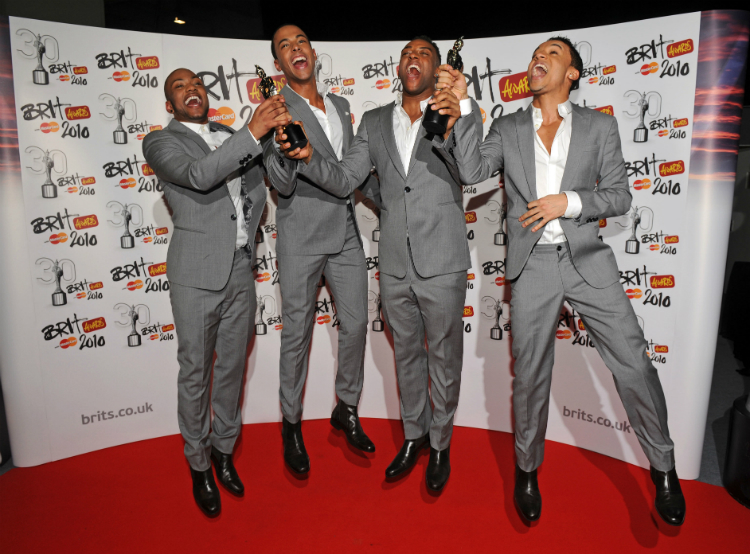 In the home strait now, and Florence and the Machine made up for earlier defeats by taking home the British Album award for Lungs, presented to them by designer Tom Ford who was in the UK promoting his directorial debut A Single Man.

The show closed with a medley to end all medleys, from Outstanding Contribution winner Robbie Williams, who rattled through 13 of his greatest hits and fan faves, including Millennium, Angels, and Rock DJ, before ending on cult fave Rudebox.

And that was a wrap!

The full list of winners and nominees for the 2010 BRIT Awards: