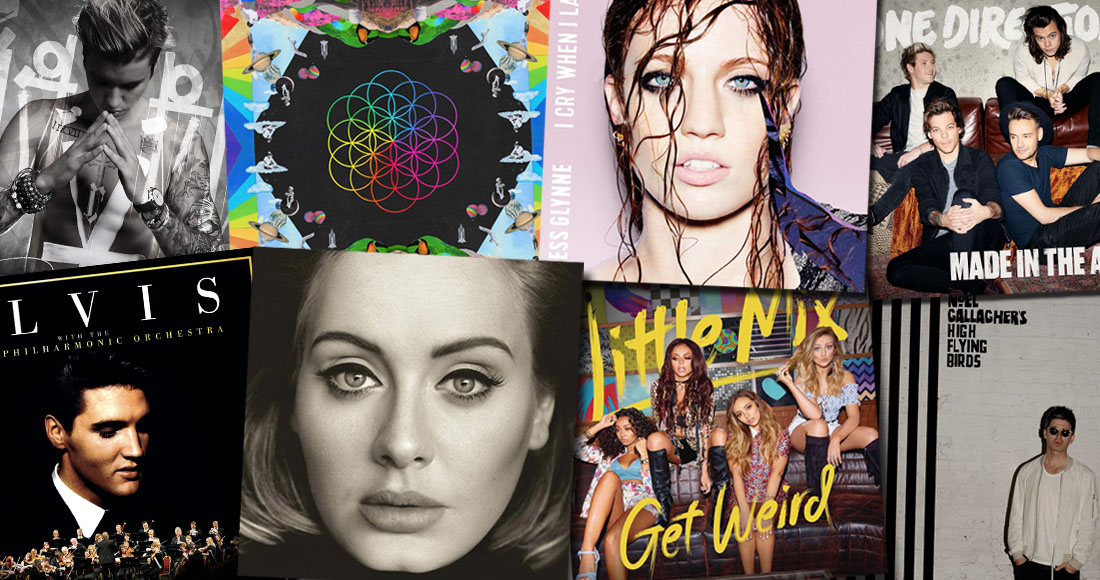 After making her long-awaited return, OfficialCharts.com can confirm that Adele’s 25 is the official biggest artist album of 2015.

The newly unveiled list, based on Official Charts Company sales and audio streaming data, sees British superstar Adele’s third album bag pole position on the 2015 end of year list. The highly anticipated comeback has sold a staggering 2.496 million copies since it was released just over six weeks ago in November last year. The collection was met with rapturous praise and broke Official Chart records upon its release, becoming the biggest Number 1 album in UK chart history after shifting 800,307 copies in its opening week.

25 has gone on to rack up huge numbers since; Just 10 days after going on sale, 25 crossed the 1 million sales barrier, and did so in record time, then by day 29 Adele became the fastest artist to smash through the 2 million sales landmark.  By comparison, her previous album 21 took 13 weeks to reach the same milestone.

Figures from music trade body The BPI also reveal that 25 was also the biggest seller globally, having shifted a further 7 million copies in the US alone.

While the Top 40 list includes streams after their incorporation into the Official Albums Chart last March, 25 has yet to be made available on streaming services, meaning her figure is made up purely of digital downloads and physical CD purchases.

Meanwhile, Ed Sheeran finishes in second place with his second album X. The collection - released in June 2014 - has continued to enjoy massive success in 2015, returning to Number 1 in July ahead of his sold out Wembley Stadium shows. By the end of the year X finished on 971,000 combined sales (2.66 million in total to date across its lifetime). Further down the tally, Sheeran’s debut + also places at 38, four years after its release.

At Number 3 is Sam Smith’s In The Lonely Hour with 893,000 combined sales (2.14 million in total). Also released in 2014, Smith continued to have success well into 2015 with the LP, hitting Number 1 on four separate occasions and notched up a record-breaking 67 weeks in the Top 10. Click here to see it’s full UK chart run.

In at Number 4 on the end of year chart and the second biggest album released in 2015 is Elvis Presley’s If I Can Dream. The King’s orchestral re-workings of his biggest hits became his 12th UK Number 1 album in November, giving him the most chart-topping albums for a male artist. Nine weeks later and the album has yet to leave the Top 3 of the Official Albums Chart, combined sales of the posthumous LP by the end of 2015 stood at 881,000.

Rounding off the Top 5 is Justin Bieber’s fifth studio album Purpose with combined sales of 645,000. The collection is the highest in the tally not to reach Number 1, pipped to the post by One Direction’s Made In The A.M in its opening week (their album finishes 14th). However, success of the collection sent a number of its songs into the Official Singles Chart, making him the first living artist to score eight Top 40 entries in the same week.

Other notable entries include Little Mix’s Get Weird, which finishes on the end of year chart at Number 11. Released in November, the album is already the girl group’s biggest of their career, having hit 389,000 combined sales to date.

MORE: The Official Top 40 Most Streamed Songs of 2015 revealed

The Biggest Artist Albums of 2015 appear below. Click here to see the full Top 100