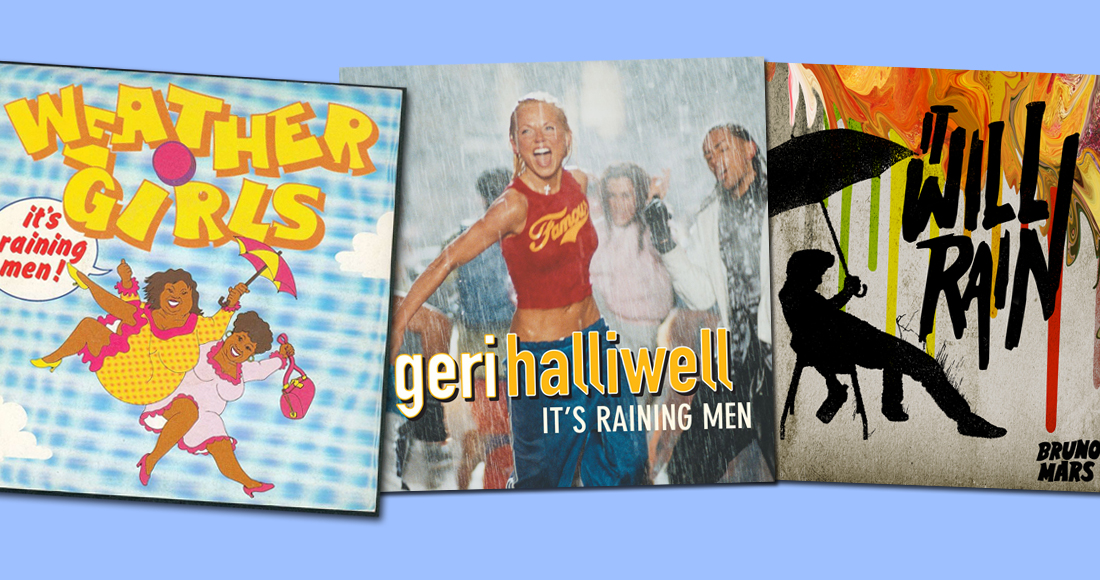 Obsession with the weather is a uniquely British phenomenon. As well as reportedly checking the forecast eight times a week on average, it's also a fail-safe social prop for making small talk. Given its mood-reflecting qualities (pathetic fallacy is the technical term), it's also a popular subject in songs.

In the 68 years of the Official Singles Chart, 102 songs with 'Rain' in their title have charted inside the Top 40. Of those, just four have reached Number 1; the most recent is a cover of Singin' In The Rain by British producer Mint Royale, which topped the chart for two weeks in 2005. It's not the first time the timeless classic has appeared in the chart: the cast of Glee covered it in a mashup with Rihanna's Umbrella, reaching Number 22 in 2011, and a hi-energy rendition by Sheila and B Devotion reached Number 11 in 1978.

Another popular 'rain' song is camp classic It's Raining Men, first released by The Weather Girls, where it reached Number 2 in 1984. Geri Halliwell's cover - which featured in Bridget Jones's Diary - took it all the way to Number 1 in 2001. The original re-entered the Top 40 at Number 31 in 2014 after becoming an unlikely protest song in the wake of a UKIP councillor's comments on gay marriage.

Elsewhere, other big 'rain' songs include Adele's Set Fire To The Rain, a Number 11 hit in 2011, and Kiss The Rain, a transatlantic one-hit wonder for British singer-songwriter Billie Myers in 1998, reaching Number 4. The first ever 'rain' themed song to reach the charts, Rain Rain Rain by Frankie Laine and The Four Lads, was a Top 10 hit, reaching Number 8 in 1954.

We've limited our list below specifically to songs with 'rain' in the title, but if we were to extend to weather themed songs, some of the big hits include Crowded House's 1992 Number 7 hit Weather With You, Rihanna's 10-week chart-topper Umbrella, and Blame It On The Weatherman by Irish girl group B*Witched.

View the full list of every 'Rain' song that has reached the Official Singles Chart Top 40 below: