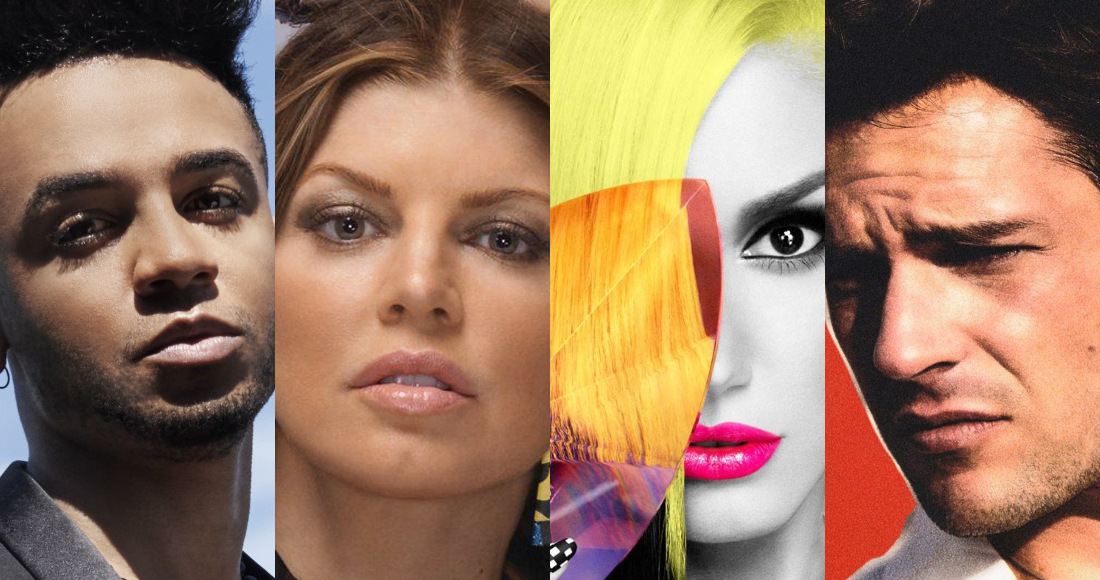 This week, former JLS star Aston Merrygold releases his first solo single Get Stupid. We look back at other lead singers who left their bands behind and compare their successes before and after solo stardom. Are you really better off alone?

Let's start with the man himself…

Yes, maaaaybe it's a little unfair to look at Aston's solo career first, as his debut solo single only came out yesterday, but let's see how Aston did when he was still part of JLS.

They may have come second on The X Factor 2008, but they're out in front when it comes to Number 1 hits by the acts who found stardom on the show. JLS scored five chart-toppers while they were together – more even than 1D! Can Aston top that? Only time will tell, but the funkalicious (yes, it's a word) Get Stupid seems like a pretty good place to start.

After three years of hits being the major set of pipes behind Black Eyed Peas, Fergie Ferg decided to dip her toe into the sea of solo stardom. She started off pretty well with Top 3 hit London Bridge in 2006, but never really left the rest of her pea pod behind.

She returned to them in 2009 and scored three Number 1s with them in the space of a year! Fergie made something of a solo comeback earlier this year with LA Love (La La), which gave her a fourth solo Top 10.

The voice behind the Fugees, Lauryn Hill raced up two Number 1s with the band within three months of each other in 1996. The million-selling Killing Me Softly and its follow-up Ready Or Not were a great start, but Lauryn reckoned she had a good chance of success by herself too.

Taking a break from bandmates Wyclef Jean and Pras Michel – who also tried their hand at the solo life – Lauryn released her debut solo album The Miseducation of Lauryn Hill in 1998. The critically acclaimed set peaked at Number 2 and spent 46 weeks in the Top 40.

To many onlookers as she first four success as lead singer of No Doubt, Gwen Stefani seemed like a solo star just waiting to happen. And yet she kept everybody waiting. Scoring her first Number 1 with No Doubt in the UK in 1996 with Don't Speak, it was five years before Gwen even featured on another track by herself, landing a Top 10 hit with Eve on Let Me Blow Ya Mind.

The world waited with bated breath for Gwen's solo career to kick off – only for it to take another three years with impressive debut Love Angel Music Baby. Its lead single, which reached Number 4, pretty much said what we'd all been thinking for the last EIGHT years – What You Waiting For?

After two albums all by herself, Gwen returned to the No Doubt fold, but we hear whispers she'll be standing front and centre as a solo star once again pretty soon.

Way, way before he was the rainforests' best friend and a bona fide rock legend, Sting was the lead singer of a band – The Police to be exact. They had a pile of hits from 1978, including five chart-toppers, but that didn't stop Sting nipping out every now and again to lay down a solo single or two and, of course, have a hit with them.

He had his first solo hit with Spread A Little Happiness in August 1982 but he had to wait until 1994 before he landed a Top 10 under his own name, and even then he had to share the billing with Bryan Adams and Rod Stewart (another lead singer who struck out on his own).

The king of Glastonbury 2015 has been a solo artist for over 30 years, but he started out as just one of the boys, sharing lead vocals with funk and soul band the Commodores until 1983.

He'd first flirted with having hits single-handed on the romantic duet Endless Love with Diana Ross in 1981, scoring the first of 8 Top 10s. After he left, the Commodores scored a huge hit with the Marvin Gaye/Jackie Wilson tribute Nightshift, but they'd only appear in the UK Top 40 once more… and that was a rerelease of a song that featured Lionel on lead vocals.

He may have been the king of Queen, but Freddie didn't do too badly by himself either. While he never left the band that made him a star, he did like to wear the solo hat – or should we say crown – a few times, landing three Top 10 solo albums all of his own.

Snake-hipped, silver-tongued, silken-voiced Pharrell sure must be Happy (sorry) that he went it alone – since stepping out of N*E*R*D, he's had three million-selling singles, including the bestselling song of the 21st century.

That's not to say he didn't have his moments as part of N*E*R*D either – Top 5 hit She Wants To Move, whose video features none other than Alesha Dixon shaking it for all she's worth on a podium, is a sparkling pop moment.

And Pharrell's first top 10 hit with a solo credit? It was on Britney's Boys, of course, which reached Number 7 in 2002.

MORE: The Official Top 40 Biggest Selling Singles of the Millennium so far

No sooner had Icelandic folk group Sugarcubes – not to be confused with Sugababes, not that anyone ever would – had their first UK hit, with, erm, Hit in 1992 than lead singer Björk was off on her own.

It proved to be a wise move – within a year she landed a debut Top 40 hit with Human Behaviour and six Top 10 albums were coming her way. Altogether she's spent 89 weeks in the Official Albums Chart Top 40.

After years of people thinking her name actually was Blondie, you can forgive Debbie Harry for wanting to try making a stab of it on her own.

After Blondie enjoyed what we all assumed would be their last hit in 1982, Debbie – or Deborah, depending on who was asking – had to wait another four years for her first, and indeed only, solo Top 10, French Kissin' in the USA.

After a few more modest hits, Debbie and Blondie (two entirely separate acts, remember) decided they were better together and returned in 1999 with monster Number 1 Maria.

When Take That split for the first time in February 1996 following Robbie Williams' departure, Gary Barlow had his solo career locked and ready to go. He was at Number 1 with Forever Love the same summer!

In 1999, Gary put that solo career on hold but, after renewed success wit take That from 2006, he had another go and returned with a duet with his old frenemy Robbie Williams, on Shame.

He had a killer career with, um, the Killers, but leading man Brandon Flowers is doing pretty well on his own too. He's not quite let go of his bandmates either – the Killers are still performing, headlining festivals across the US this summer.

To add to his four Number 1 albums with the Killers, Brandon has two chart-topping sets of his own, the most recent coming just a few weeks ago with The Desired Effect.

When it comes to singles, he's broken the Top 40 just once, but it was on his very first try – back in 2010 with Crossfire.

Who's your fave lead singer who went solo? Hit us up on Facebook or Twitter or in the comments below!