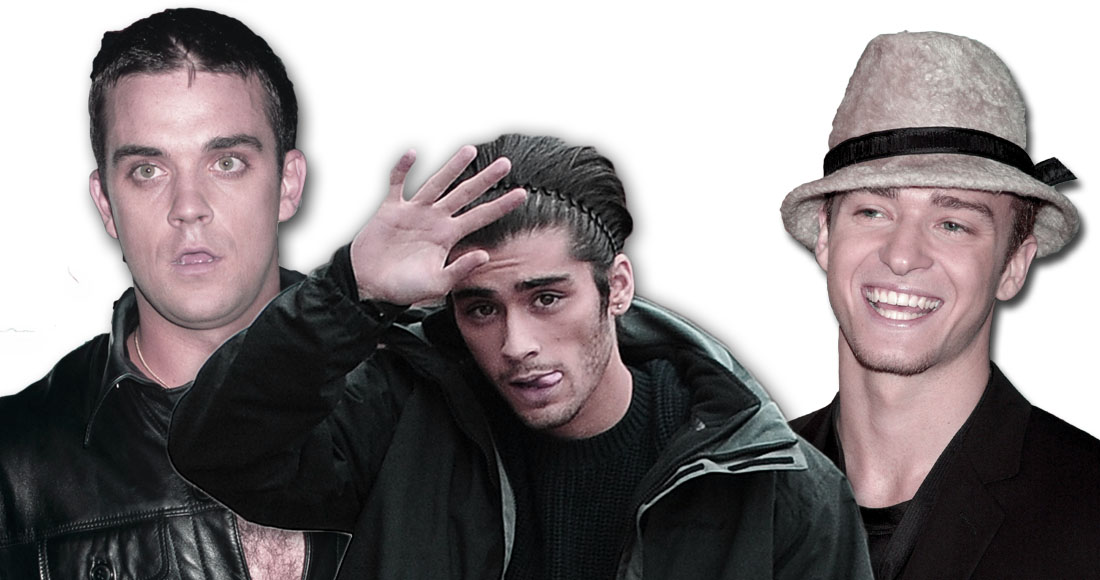 Boys will be boys, all right, but there comes a time when every guy wants to have a bit of time to himself.

Zayn’s exit from One Direction recalls two similarly dramatic group departures in recent pop music history: Robbie Williams leaving Take That and Geri Halliwell from the Spice Girls. Like those before him, Zayn waved goodbye to his bandmates whilst still at their peak, sending shockwaves across the planet and throwing the future of the group into doubt.

Of course, everyone survived, One Direction soldiered on (shortly before announcing they would be taking an extended break in 2016 – hmm), and Zayn has been hard at work on his solo debut - the fruits of which we’ll see with the release of his first single Pillowtalk this week. Watch a teaser of what to expect from his album below:

One of the biggest boyband-turned-solo success stories in the UK, superstardom didn’t always look a dead cert for our Robbie. It was only when future million-seller ballad Angels won hearts – but not the Number 1 spot – that Robbie’s place in pop history was assured. He’s scored an incredible seven Number 1 singles and he’s topped the Official Albums Chart eleven times. Eleven!

*N Sync were a pretty big deal stateside, but it was only toward the very end of their time together that Justin started to emerge as the clear solo star. Final hit Girlfriend FT Nelly seemed to showcase Justin’s potential and, sure enough, just a few months later, he was slamming straight in at Number 2 with debut hit Like I Love You. Four Number 1s from 22 Top 40s later, and it’s hard to imagine Justin was even “in sync” with anyone other than the beat of the “drums”. (You have got to be kidding – Anti-pun Ed)

ChartFact: JT’s first solo single was kept off Number 1 by none other than his old pal Nelly, who was having a big old Dilemma with Kelly Rowland. View that week’s chart.

Can you call a band of five brothers a boyband? Why not, eh? Michael Jackson was always destined for greatness and he flirted with a solo career while still a part of the Jackson 5 (later to become The Jacksons when they secured a new record deal).

It was 1979 album Off The Wall that really introduced the idea of Michael being a megastar in his own right and until his death thirty years later, he racked up 40 Top 10s of his own, of which seven went all the way to Number 1.

> Every single Michael Jackson hit is in our archive, including full chart runs

ChartFact: Following Michael’s death in 2009, many of his hits returned to the Top 40. The big winner was Man In The Mirror, which improved on its original position 1988 peak of Number 21 to land at Number 2. But who beat it to Number 1? Check out the chart from that week for the answer…

Of all the Blue boys lined up for solo stardom, you could be forgiven for thinking it would be Lee Ryan who’d come out on top. And while Duncan and Lee both had Top 10 hits first, it would be a case of slow and steady winning the race for our Si. He scored two Top 10s, including the uplifting No Worries, and saw his debut album Sanctuary also hit the top 10.

ChartFact: Blue’s first Number 1 was Too Close, a cover of the Next hit from the USA. It knocked another boyband off the top in September 2001. Find out who in our chart archive for that week…

After six Number 1s with Boyzone, Ronan decided he needed a little more room on stage, thank you very much, and launched his solo career with When You Say Nothing At All, a cover of an old US country hit. It would be the first of three chart-toppers for Ronan, and he’d take four albums to Number 1 too. Boozy reunited in 2008, but Ronan has still got his finger firmly in the solo pie; he had his seventh Top 10 album, Fires, in 2012.

> Brush up on Ronan’s chart archive

Brian decided a dozen Number 1s was a good point to say farewell to Westlife and have a go at making it on his own. Four Top 40s awaited him, including a Number 1 with debut single Real To Me.

ChartFact: Westlife’s first seven singles were all Number 1s. Nose through Westlife’s chart history and see for yourself.

Disney stars who were huge in the USA, Jonas Brothers were tabloid favourites thanks to their good looks and their fondness for purity rings. It was Joe Jonas who looked like he was going to be the big deal, but while he landed a Top 40 with Demi Lovato in 2008, attempts to launch a solo career of his own didn’t quite work out. The closest he came was just outside with 2011’s See No More.

Baby bro Nick, then, is the one getting the attention of late, having scored a massive Number 2 hit with Jealous in April 2015 and a Top 20 album. And something tells us there's plenty more where that came from...

Sometimes it’s no surprise when a boyband bloke strikes out on his own and while we loved Wham together, it did feel like George was on the cusp of something big just as soon as he’d dare go solo.

And he finally dared in 1984 with Careless Whisper, while the band was still together. George finally called it a day with Wham in 1986, after scoring another solo chart-topper with A Different Corner.

He’s landed seven Number 1s all of his own, and has topped the Official Albums Chart seven times too – only one solo album missed the summit. See George's impressive chart record for yourself.

As part of The Wanted, Nathan score three Top 10 albums, along with ten Top 10s on the Official Singles Chart, including Number 1s All Time Low (2010) and Glad You Came (2011). Then four became one, and Nathan launched his solo career in the summer of 2015. His debut album is due later this year and as you can see here, it's all going pretty well so far...