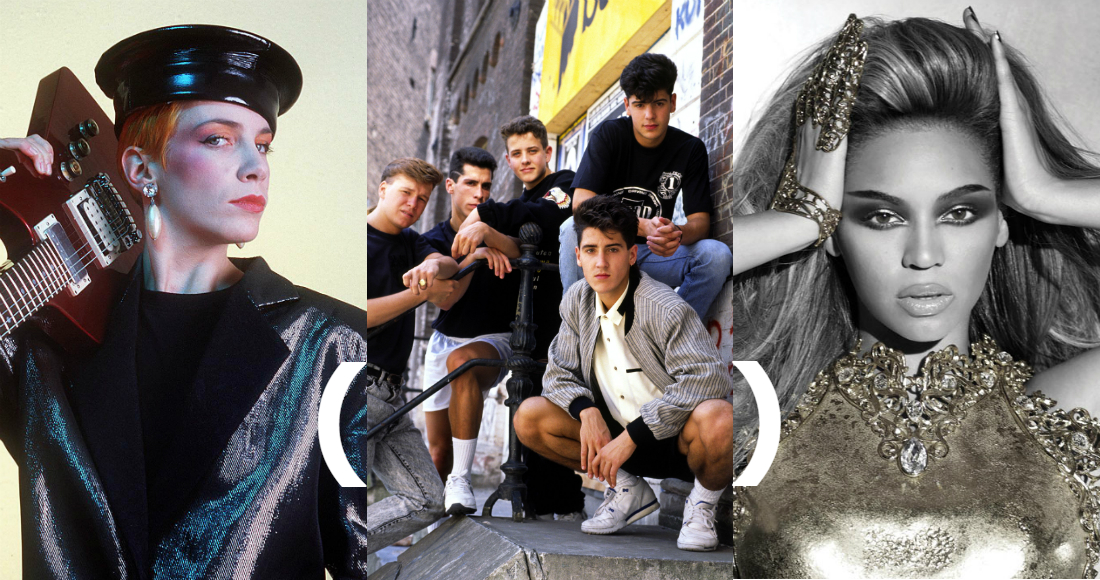 Choosing a song title is like picking a name for a baby – in most cases, it'll have it forever, so you need to make it work. Where song titles differ is people usually have a middle name to fall back on if they can't stand their first – although the nearest equivalent would, perhaps, be the strange songwriting quirk of adding extra words to a song's title (in brackets, usually).

We look into a very particular, peculiar pop phenomenon (and try to come up with a few answers).

First of all, the different types of bracketed titles you might see – what might they be for?

Let's start with one of the most common occurrences of pop parentheses: distinguishing one version of the same song from another. You know the ones: (Remix) or (Live). Huge summer 2017 Number 1 Despacito (Remix) featured Justin Bieber, the original did not. The (Felix Jaehn Remix) brackets added to OMI's Cheerleader warned pop fans another version was out there and not quite on the same vibe. In the '70s and '80s it was quite common for bands to release live versions of their tracks, so those trusty brackets would be put to good use.

To avoid confusion with another song of the same name

Song titles are like streetnames in a big city, there's bound to be more than one. Fergie no doubt added (Personal) to the end of Big Girls Don't Cry to let you know it wasn't a cover of the older song by the Four Seasons. There's a very famous song by Ben E King called Stand By Me – did The Clash choose to shove the phrase in brackets and call their song Train In Vain (Stand By Me) to avoid confusion? We're sure Britney was a huge Seal fan, but didn't want fans to mix up her Crazy with his, so slotted in (You Drive Me) upfront, and Eurythmics surely appended their 1983 hit Sweet Dreams with (Are Made of This) because a clairvoyant told them Beyoncé would release a single called Sweet Dreams over 20 years later. Right? Exactly.

Baz Luhrmann's Number 1 Everybody’s Free (To Wear Sunscreen) flagged up this was not quite the same as the song it covered – Rozalla's Everybody's Free (To Feel Good) – and thus avoiding huge disappointment to anyone hoping for a faithful re-up of the '90s rave classic.

You can find many examples of this phenomenon in dance music, says songwriter Tom Aspaul: "It seems to happen a lot when dance tracks have an offbeat name, then someone writes a big pop banger over the top of the original instrumental… like Last All Night (Koala) from KStewart and Oliver Heldens."

To make it easier to find

Some song titles can be pretty obscure, or not quite fit the song. Would you ever guess that James Brown classic you all know was not called I Feel Good – even though he says the phrase approximately 100 times? Nope, it's I Got You (I Feel Good).

Before the internet and search engines existed, to find a song you had to go to a record shop and ask another human if they knew what a certain song was and, as we know, humans are useless. Cher's Number 1 cover from 1991, for example – The Shoop Shoop Song (It’s in His Kiss) – may have got its title because its original songwriters probably reckoned one half of the record buying public would latch on to all those shoops, while the other would remember the bit about his kiss (that's where it is, after all). Another, more modern example would be Beyoncé's engagement/tight jeans anthem Single Ladies (Put a Ring on It).

Longer titles that need cutting down to size

Sometimes brackets serve to tell you it's OK to shorten a song's title. Songs that start off with titles that are a bit of a mouthful, but would still make sense if you cut them down, usually get the parentheses treatment. (Everything I Do) I Do It For You, (Is This The Way To) Amarillo, (I’ve Had) The Time of My Life, and The 1975's It's Not Living (If It's Not With you) are all recognisable without them. Even the very first million-selling single can't escape them – its full title is (We're Gonna) Rock Around The Clock. Seriously!

MORE: All the UK's million-selling singles

Meat Loaf is famous for titles that don't half go on a bit – we reckon songwriter Jim Steinman does it on purpose. His most successful, and perhaps funniest, is the 1993 hit I’d Do Anything for Love (But I Won’t Do That).

Another, and thankfully more sensible, reason is that songwriters want a song to be called one thing, but the lyrical themes almost demand it be called another. For example: No More Tears (Enough Is Enough), Everybody (Backstreet's Back), December 1963 (Oh, What A Night), Rabbit Heart (Raise It Up), and so on.

Sometimes, you can't help but think the song would have been better off called something else. New Kids on the Block's You Got It (The Right Stuff) kind of removes the mystery of what this mythical girl has actually got, and the Proclaimers' I'm Gonna Be (500 Miles) still sounds grammatically dodgy. As for Phil Collins classic Against All Odds (Take a Look at Me Now), Mariah and Westlife clearly thought the brackets were absolute nonsense: they dispensed with them on their amazing cover, a Number 1 in from 2001.

OK, some have us totally baffled. Did you know the full, original title of Whitney Houston's signature hit is I Wanna Dance with Somebody (Who Loves Me)? The bracketed words on George Michael and Aretha Franklin's 1987 Number 1 I Knew You Were Waiting (For Me) are only really useful if you thought the pair may have been waiting for a train, or the pizza delivery guy to arrive. Or what about Rihanna's Only Girl (In The World)? Has anyone ever called it just Only Girl?

And what about Simple Minds' best known hit? You know it as Don't You Forget About Me, right? And if we were to tell you the song had brackets in the title, you'd maybe rethink it to (Don't You) Forget About Me, maybe – but you would be wrong. It's actually Don't You (Forget About Me). If you work on the rule that anything in brackets can be removed, the song is called Don't You. Don't You. Seriously.

What's your favourite song with a bracketed title? (Do you even notice titles like this?) Let us know!