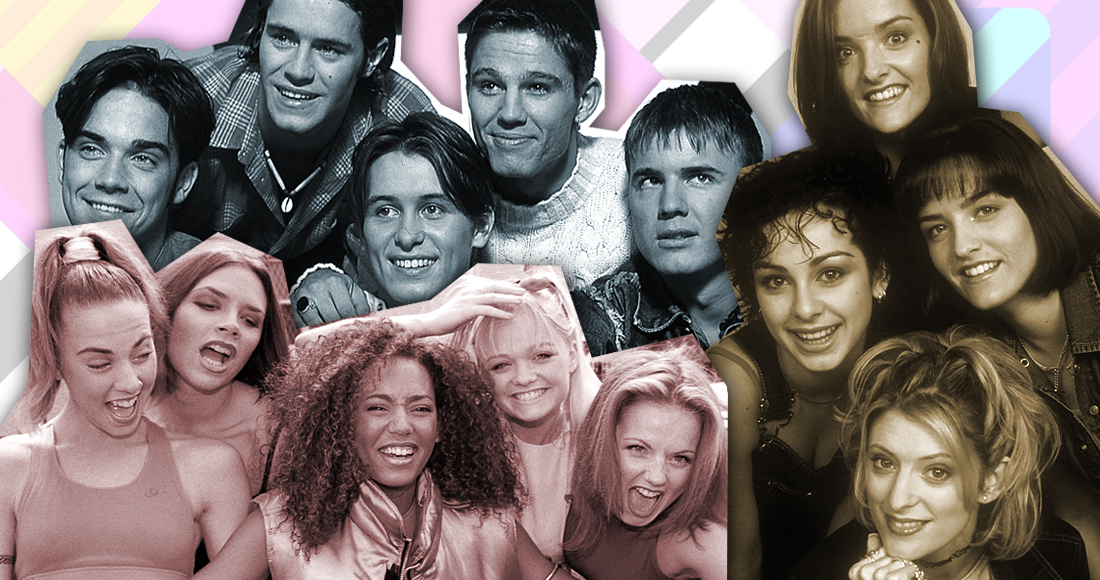 You know you're on to a winner when your album features so many Number 1 singles that it looks more like a greatest hits.

32 studio albums from 30 acts feature three or more Official Singles Chart Number 1 hits, so considering how many albums have ever been released, this lot are the cream of the crop.

Let's have a closer look at the records containing the most UK chart-toppers.

Westlife - Westlife
The Irish boyband's 1999 self-titled debut album really was a big deal. No act has scored five chart toppers in a faster timeframe, with Westlife achieving it in just 49 weeks, bettering Elvis Presley and The Shadows' sprints to that total of 53 weeks. All five songs from the record - Swear It Again, If I Let You Go, Flying Without Wings, I Have a Dream/Seasons in the Sun and Fool Again - debuted at the top of the charts too, something no act had ever done before. To top things off, I Have a Dream/Seasons in the Sun was also Christmas Number 1.

In fact, Westlife's first seven songs all reached Number 1, bettering Spice Girls for the best opening run of any career in chart history.

Jess Glynne - I Cry When I Laugh (Deluxe)
Fast-forward to August 2015 and the deluxe edition of Jess Glynne's I Cry When I Laugh joined the club. While the standard version of the record features two chart toppers, the deluxe edition released the same day (rather than months later as some tend to) featured her three Number 1 collaborations with Clean Bandit, Route 94 and Tinie Tempah.

The Number 1s featured are Rather Be, My Love, Hold My Hand, Not Letting Go and Don't Be So Hard On Yourself and helped Jess match Cheryl's record for the most chart-topping singles by a British female soloist. Jess now has a further two Number 1s and holds the record all to herself.

Jess was pretty chuffed when she found out the news:

Ummmmmm incase you didn’t know that’s me! Yep still me you’re looking at.. mmmhmmm nope not changed yet still me! Mmmmhmmmmmm! When a fact is a fact yeah.. it’s a fact mmhmm! Yes I’m gassed cause this is mad I’m a little ginger girl from north London who worked to the bone and seeing shit like this when I feel like I’m not enough makes it all fucking worth it! So I love everyone who has supported me and been on this ride with me! We are STILL at the beginning! Bottles UP! 🖤

Spice Girls - Spice
I really, really, really wanna... get a chart record! With Wannabe, Say You'll Be There and 2 Become 1, Spice Girls had matched Gerry and the Pacemakers, Frankie Goes To Hollywood, Jive Bunny and the Mastermixers, and Robson and Jerome as the only acts to get to Number 1 with their first three releases.

1997 double A-side Who Do You Think You Are/Mama helped the girls go one better, and they became the first act to have their first four songs top the UK's Official Chart. Spice Girls will always be the first girl group to achieve this, although it wasn't long before the second - and most recent to date - managed it too, and they did it in an even grander fashion.

B*Witched - B*Witched
We were of course talking about B*Witched. Edele, Keavy, Linsday and Sinéad are the only girl group in history to have their first four singles debut at Number 1 - Spice Girls' Wannabe entered the charts at Number 3, climbing to the top spot the following week. The Irish quartet's UK Number 1s are 1998's C'est La Vie, Rollercoaster and To You I Belong, plus Blame It On The Weatherman from 1999, all of which featured on their self-titled debut album.

Dizzee Rascal - Tongue n' Cheek
Dizzee Rascal claims the honour as being the first British male to release an album containing four Number 1 singles. Dance Wiv Me, Bonkers, Holiday and Dirtee Disco all feature on 2009's Tongue n' Cheek, Dizzee's fourth album that really saw him step into the mainstream pop world. Three of those Number 1s occurred in less than 12 months, something another British rapper wouldn't achieve until Stormzy in January 2020. Dirtee Disco was a later addition, being included on the deluxe edition released the following year.

Then came Gaga's The Fame Monster EP, packaged as a double album with the original 14-track collection. The Fame Monster spawned two further Number 1s: another million-seller in Bad Romance, and Beyoncé collaboration Telephone. Counting as one product, this made Lady Gaga the first female soloist to have an album contain four UK Number 1 hits. If you don't count that, then Jess Glynne holds the record now anyway, so you don't have to lose any sleep over it.

A repackaged edition of an album helps Sam Smith join this elite club. Their debut album In The Lonely Hour contains the chart-topping Money On My Mind and Stay With Me, and the deluxe edition also features the Number 1 collaboration with Naughty Boy La La La. The Drowning Shadows version released a year-and-a-half later contains the four deluxe tracks, plus eight more songs including the John Legend duet version of Lay Me Down, which reached Number 1 in aid of Comic Relief.