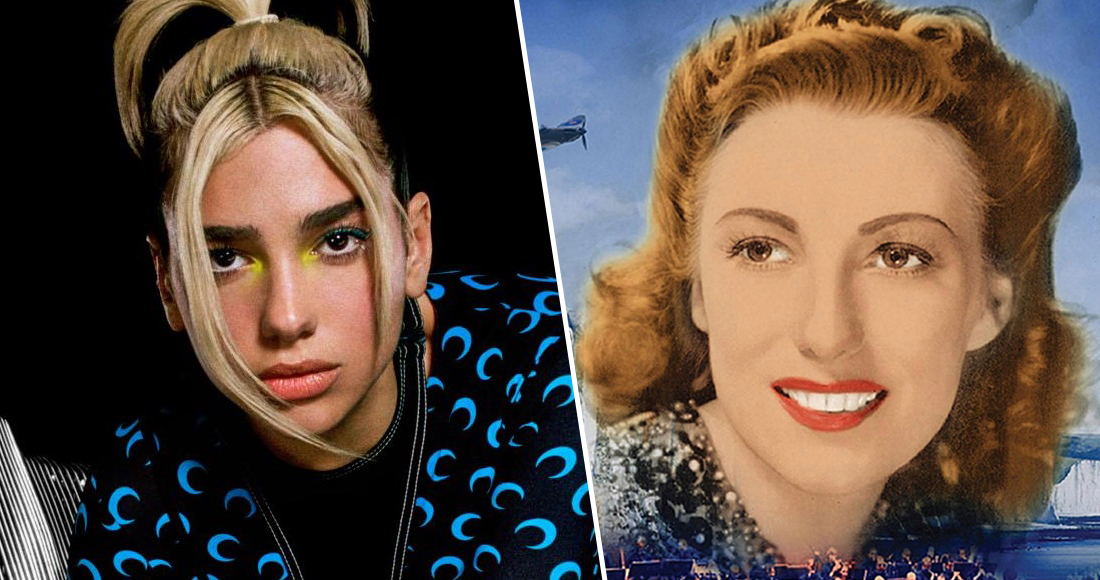 This past week, Dua Lipa achieved something no other English female has since the very first Official Singles Chart nearly 68 years ago.

Following the release of her second album Future Nostalgia (which saw her smash Spotify streaming records), Dua scored three Top 10 singles at the same time, with Physical rising to Number 3, Don't Start Now enjoying a 21st week in the Top 10 at Number 4 and Break My Heart debuting at Number 6.

The last time an English woman pulled this off was on November 14, 1952 when the Official Chart was published for the very first time, and that artist was the legendary Dame Vera Lynn.

While Vera is best known for her song 1939 single We'll Meet Again which pre-dates the Official Chart, she has many feathers to her cap, including being the only living centenarian to enter the Official Albums Chart, and being the oldest living artist to claim a Number 1 album. But Vera was also the first woman to have three singles in the Top 10 at the same time. On the very first Official Chart, Vera occupied positions 7, 9 and 10 with Forget Me Not, The Homing Waltz and Auf Wiederseh'n Sweetheart.

Northern Irish singer Ruby Murray was the next to record three top Top 10 hits at once in 1955, and she didn't just do it for a single week. Ruby had three songs in the Top 10 for three consecutive weeks that February/March, most impressively when Softly Softly was Number 1, Heartbeat rose to Number 4 and Happy Days and Lonely Nights sat at Number 6.

The following week Ruby had just two songs in the Top 10 (you know, casual) before having three concurrent Top 10s again for a single week. Softly Softly was still sticking around at Number 2, with Let Me Go Lover at Number 6 and Anne Warren duet If Anyone Finds This I Love You at Number 10.

It took 55 years for another female artist to take out three places in the Top 10, and it was Rihanna who ended the drought in 2010. That December, Rihanna's tracks Only Girl (In The World) and What's My Name ft. Drake were Numbers 7 and 8 respectively, while her featured appearance on David Guetta's Who's That Chick was Number 9. That combination of tracks occupied the Top 10 at the same time for three non-consecutive weeks in total.

Ariana Grande was the first American female to achieve the feat in 2019, and the latest before Dua Lipa took out a page in the history books. The first female to manage a Top 10 trio as a lead artist in almost 64 years, Ari occupied Numbers 1, 2 and 8 respectively with Break Up With Your Girlfriend I'm Bored, 7 Rings and Needy in the same week she became the first women to replace herself at Number 1.