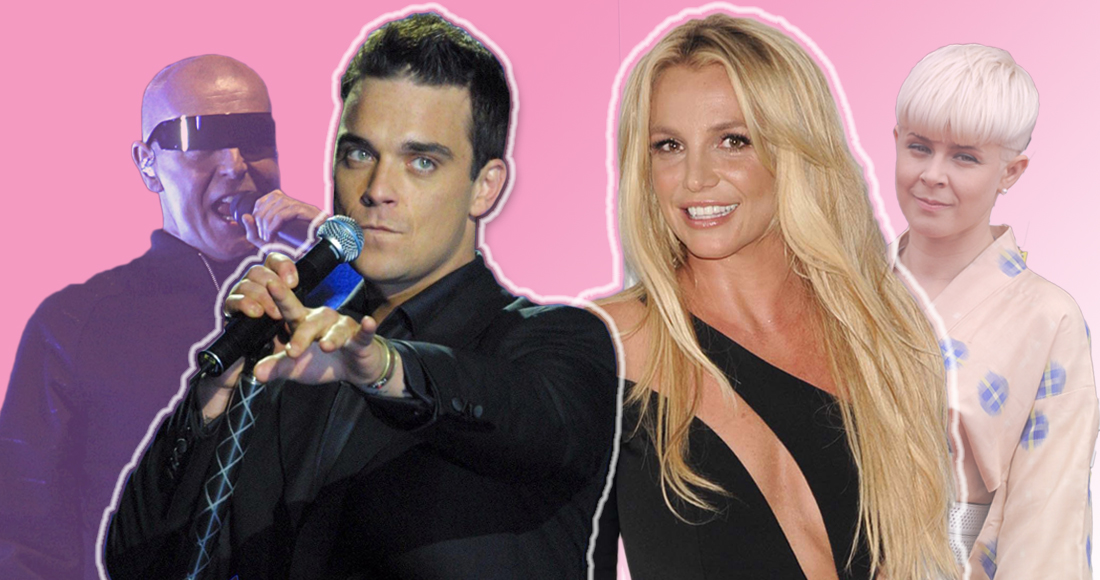 But while most music stars are at their happiest when the spotlight is firmly centred on them, plenty have helped out a fellow act by lending their vocals to a track without the need for a ‘featuring’ tag. Below is a selection of big names who have offered support on others songs...

The second single from Robbie’s 1998 I’ve Been Expecting You album features two uncredited vocalists – Pet Shop Boys’ Neil Tennant and Neil Hannan from The Divine Comedy. The track was the first of many collaborations between Robbie and the PSB frontman, teaming up again (officially, this time) on 2007’s She’s Madonna and We’re The Pet Shop Boys from his Rudebox album.

Britney Spears – Piece of Me

The second single from her critically acclaimed 2007 Blackout album, Piece Of Me features backing vocals from Swedish pop star Robyn. The singer–songwriter later explained in an interview with Time Out that the song’s writer Klas Ahlund “asked me to demo it, and they kept the backing vocals for the final chorus.” If you didn’t know before, you won’t be able to un–hear her now.

As if the band’s final single from their A Head Full Of Dreams album wasn’t emotional enough, the song features his ex, sorry, consciously uncoupled wife Gwyneth Paltrow. Sob!

A Top 5 hit in the UK in 2001, Play was written by AM To PM star Christina Milian in, as she claims herself, in 10 – 15 minutes. As she explains here, she was intending to keep the song for herself, but happily gave it up once she discovered J–Lo was interested in it. They did, however, keep Christina’s vocals on the chorus.

Arcade Fire’s dark disco epic, which headed up their fourth album of the same name, includes oh–so–subtle backing vocals from none other than David Bowie. Discussing at the time with NME, multi–instrumentalist Richard Reed Parry explained: "It was just after The Next Day had come out. He basically just came by the studio in New York while we were mixing, just to have a listen to the stuff we were doing. He offered to lend us his services because he really liked the song. In fact, he basically threatened us – he was like, 'If you don't hurry up and mix this song, I might just steal it from you!' So we thought, well why don't we go one better, why don't you sing on our version? Thankfully he obliged, and we were really happy about that."

MORE: See all Arcade Fire's UK hits in their archive

Listen carefully on the chorus, and you’ll hear Chris Brown’s voice in the mix. The singer originally wrote and recorded the song for his second album Exclusive, but it ended up in Rihanna’s lap after Chris decided it would better suit a female vocalist. We’re inclined to agree with him on this one.

Yep, the White Stripes frontman provided secondary vocals on the genre–bending band’s debut single in 2003, which peaked at Number 2. Members of the band have also claimed in interviews that the singer was an auto mechanic named John S. O'Leary, which is thought to be White’s pseudonym.

Taken from her most recent album Revival, Same Of Love heavily features Charli XCX, who wrote and demoed the song in a session for Selena’s album with hitmaker duo Stargate (Rihanna, Beyonce) and Benny Blanco (Ed Sheeran, Justin Bieber). Charli’s voice is particularly present on the chorus, dontchathink?

For years fans speculated as to whom Carly’s hit single; and when it was revealed that Rolling Stones frontman Mick Jagger had provided uncredited background vocals for the song, many assumed the song must be about him. Simon always denied those rumours, insisting the song is about a number of men in her life, but that the second verse was strictly about US actor Warren Beatty.

Madge was pretty loyal when it came to backing vocalists, using the same set of ladies for years across her albums and tours. For this controversial Number 2 hit from 1990, however, Madonna went in a different direction, enlisting co-writer Lenny Kravitz to pepper the song with some well-placed tuneful moans to give Justify My Love an even saucier feel.

Listen not all that carefully to the chorus of this uplifting hit from 1996, and you'll hear Eurythmics' star and award-winning solo artist Annie Lennox, who also wrote the track. Annie had recorded it for herself four years before, as a B-side, but changed some lyrics for Whitney's version, which appeared in the movie The Preacher's Wife – Annie's voice remains, however.

Bowie's first US Number 1 was the result of a jamming session with former Beatle John Lennon in New York. Bowie was developing a riff for another song, and when Lennon sang "aim" on the top, the pair realised something magical could be happening and the song would become Fame. Those high parts you can hear that aren't quite Bowie-esque? That's Lennon.

Another case of songwriter getting behind the mic – well, if they're there anyway and you know they can hold a note, why not, eh?. Diana's massive Number 1 from 1986 gets a helping hand from the Brothers Gibb throughout, with the odd adlib in the verses, before going full Bee Gees' powerhouse in the chorus.

Paris Hilton – Nothing in this World

Does it count if the backing singer wasn't actually a star at the time? Let's say it does just this once. Paris's follow-up to the seminal Stars Are Blind featured the vocal talents of Kesha, who would go on to have a considerable number of hits of her own.

This 1980 track was Peter's first solo Top 10 hit after leaving Genesis and its success may well have something to do with the fact Peter had signed up his friend Kate Bush to do the backing vocals. Six years later, the pair would have another Top 10, but with Kate on equal billing this time, with Don't Give up.

Michael Jackson – In The Closet

Originally credited to Mystery Girl, the video for this spooky Michael Jackson hit from attributed the guest vocals to supermodel Naomi Campbell. The actual singer's identity was even more of a WTF moment – it was Princess Stephanie of Monaco. The King of Pop and a real-life princess – nobody saw that one coming.

MORE: Michael Jackson's complete collection of hit singles and albums in the UK

This Kanye-produced track, a Top 20 hit for Alicia in 2003, features the considerable talents of John Legend, before he became well-known as a singer in his own right.

Geri Halliwell – Bag It Up

The third solo Number 1 in a row for the artists formerly known as Ginger, and with Geri being big pals with George Michael at the time, who better to lend their voices t o this smash than Wham!'s very own backing singers Pepsi & Shirlie? After Wham! Split in 1986, Pepsi & Shirlie went on to have a couple of hits of their own, most notably the Number 2 Heartache, in 1987, beaten to the top by… their old mate George Michael and his duet with Aretha Franklin, I Knew You Were Waiting (For Me)

What's your favourite backing vox cameo by a big star? Let us know in the comments below!