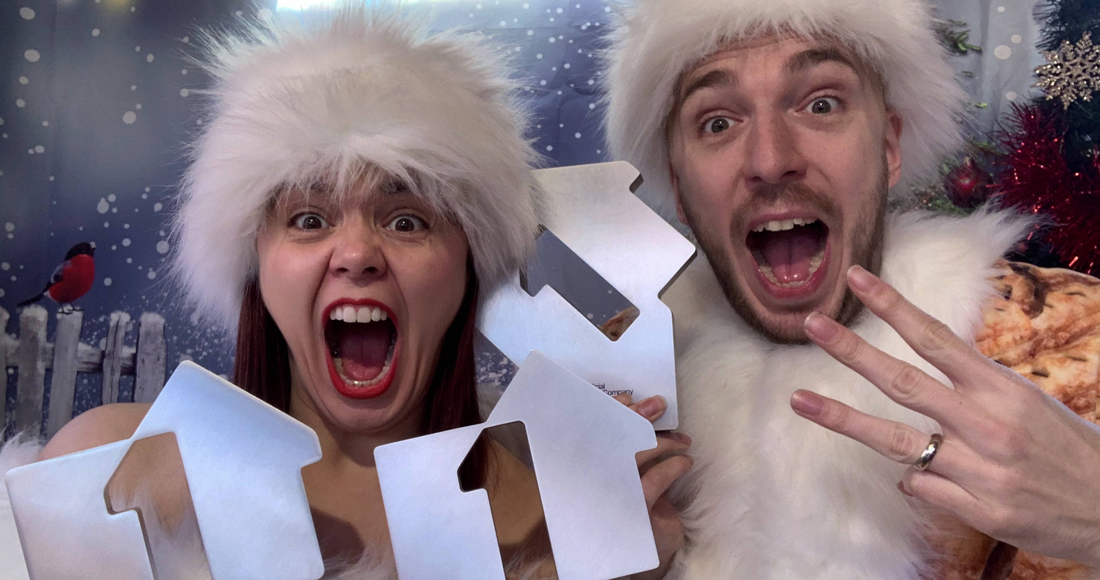 It’s official: LadBaby’s Don’t Stop Me Eatin’ is the winner of the 2020 Official Christmas Number 1, securing a hat-trick of festive chart-toppers and the fastest-selling single of the year.

The social media stars’ third festive (and sausage roll-themed) single scores 158,000 to land at the Yuletide summit – the biggest opening week for a single this year, overtaking Billie Eilish’s No Time To Die, and the fastest selling single in more than three years, since Artists For Grenfell’s Bridge Over Troubled Water in June 2017.

94% of its total figure came from downloads and physical CD sales – money raised from the single goes to foodbank charity The Trussell Trust. Watch the moment news was broken to LadBaby on BBC Radio 1 below:

LadBaby – aka Mark Hoyle and his wife Roxanne – now match a record jointly held by The Beatles and Spice Girls – the only other acts who can lay claim to a trio of consecutive Christmas Number 1s. LadBaby claimed the Official Christmas Number 1 in 2018 with We Built This City, and I Love Sausage Rolls in 2019.

And the accolades keep rolling in: Don’t Stop Me Eatin’ is LadBaby’s biggest Number 1 yet, out-performing the first-week figures of his previous two chart-toppers.

Celebrating the news, LadBaby told OfficialCharts.com: “From the bottom of our hearts, we just want to say thank you again to everybody. We can’t believe that, a third year on, we’ve had so much support yet again. We’re trying to raise money for an amazing cause, so thank you.

"Merry Christmas to everyone and don’t stop believin’ – that things are going to get better. 2021 is going to be better for everyone.”

Watch our full Christmas Number 1 interview with LadBaby - including whether he will go for the festive crown again next year - below:

Martin Talbot, chief executive, Official Charts Company, added: "LadBaby’s achievement in matching the records of The Beatles and Spice Girls, not to mention the staggering sales and money raised, is nothing short of incredible – and it is great to have a national treasure like Sir Paul McCartney on top of the Official Albums Chart at Christmas, after a gap of more than 30 years. The two successes are a perfect summary of all that is special about the UK’s Official Charts.”

LadBaby holds off challenges from festive classics All I Want For Christmas Is You by Mariah Carey (2), and Last Christmas by Wham! (3), while Jess Glynne's rendition of Donny Hathaway's This Christmas - newly recorded for 2020 – climbs five places to a new peak at Number 4.

Meanwhile, a late challenge for the coveted top spot from cult Essex punk act The K**ts – an expletive-laden protest track about the prime minister titled Boris Johnson is a F**king C**t – manages to gatecrash all the way to Number 5.

Justin Bieber lands three entries in the Official Christmas Chart: his cover of Rockin’ Around The Christmas Tree (8), Mistletoe (29) and a new version of his hit song Holy with the Lewisham & Greenwich NHS Choir finishes just outside the Top 40 at 41.

Liam Gallagher’s new winter-warmer single All You’re Dreaming Of re-enters the Top 40 at Number 24 following its release on vinyl this week. Money raised from the song goes to charity Action For Children. Further down, Ed Sheeran’s surprise ‘fan track’ Afterglow debuts at Number 30.

Elsewhere, a total of 26 festive favourites feature in this week’s Christmas Top 40, including The Pogues’ Fairytale Of New York ft. Kirsty MacColl (6), Shakin’ Stevens’ Merry Christmas Everyone (7), Band Aid’s Do They Know It’s Christmas (9), and Elton John’s Step Into Christmas (10).