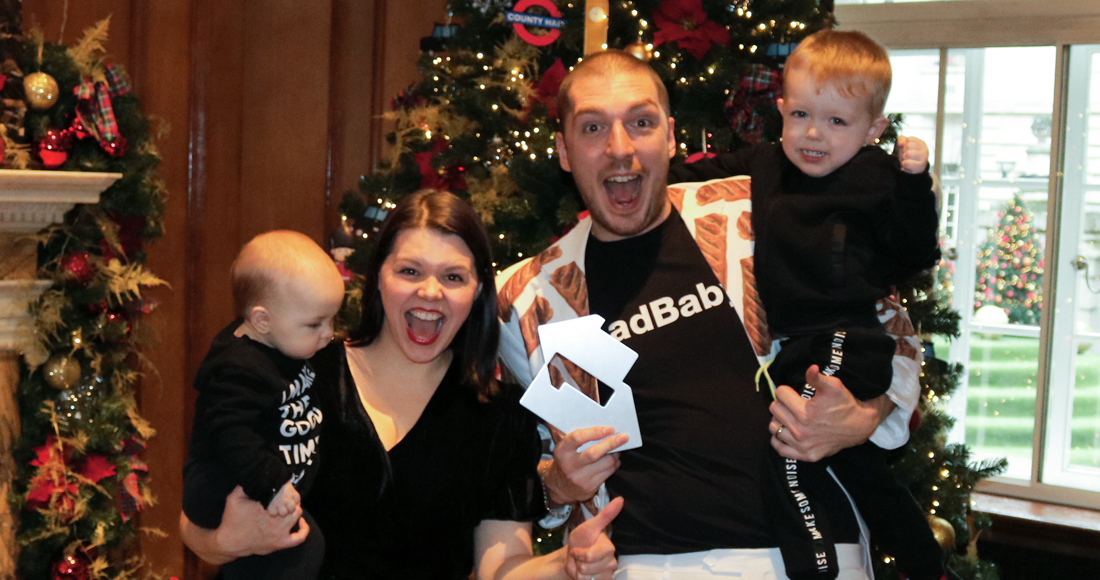 Congratulations to LadBaby, who claims this year’s Official Christmas Number 1 with We Built This City.

The 31-year-old YouTube sensation and dad blogger – real name Mark Hoyle – plus his wife Roxanne and two sons, recorded their own version of Starship’s 1985 hit as an ode to sausage rolls (rather than rock and roll). Proceeds from the single go to foodbank charity The Trussell Trust.

LadBaby’s We Built This City shifted 75,000 combined sales this week to take the top spot, and despite a fiercely close race all week, finishes 18,500 ahead of his closest competition after a last-minute push. 93% of his sales were downloads, with the remainder made up from audio and video streams.

We Built This City is also the first novelty song to claim the festive top spot in 18 years, since Bob The Builder’s Can We Fix It? in 2000. Look back over every UK Christmas Number 1 single here.

Celebrating with OfficialCharts.com, LadBaby said: “Thank you everybody in the UK who has got a sausage roll to the top. I can’t thank you enough not only for downloading the song but for raising money for such an incredible charity. I’m honestly speechless and lost for words. Thank you so much. YES MAAATE!”

Official Charts chief executive Martin Talbot adds: “It is a truly fantastic achievement by LadBaby to claim the 2018 Official Christmas Number 1, in what has been an incredibly competitive race against two massive hits of the moment. In doing so, he has also shown once again the enduring power of campaign singles, especially at this time of year. The success is tribute to the huge effort put into the campaign by Ladbaby himself, plus all of his supporters - and, in raising money for the Trussell Trust, is very much in the spirit of Christmas."

After leading the way at the midweek stage, US singer Ava Max’s Sweet But Psycho has to settle for Number 2, while last week’s chart-topper thank u, next by Ariana Grande is at 3. Look back at every Christmas Number 2 single here.

Mariah Carey leads the charge of festive classics in this year’s Official Christmas Chart with All I Want For Christmas Is You at Number 4, Last Christmas by Wham! is at 7, and Ariana Grande’s Imagine is new at 8.

Shakin’ Stevens’ 1985 chart-topper Merry Christmas Everyone is at 20, Brenda Lee’s Rockin’ Around The Christmas Tree places at 21, Chris Rea’s Driving Home For Christmas climbs to 22, Ariana Grande’s Santa Tell Me lifts seven places to an new peak at 23, and Wizzard’s I Wish It Could Be Christmas Everyday is at 24.

Finally, John & Yoko Ono’s Happy Xmas (War Is Over) returns to the Top 40 at 29, as does Paul McCartney’s Wonderful Christmastime at 35 and Slade’s Merry Xmas Everybody at 36.