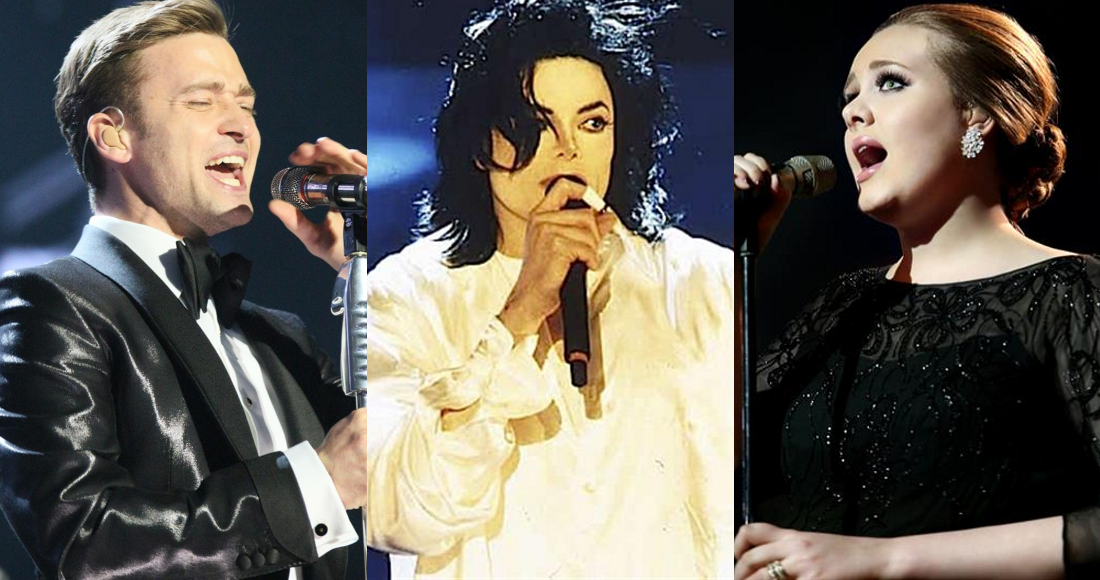 Ahead of the 2015 BRIT Awards next week (February 25), we take a look back and some of the biggest and best performances in BRITs history.

There were big bonanza productions from Take That and Rihanna at the 2011 BRITs, but the real show-stopping performance came from the most minimal of the night. Backed by only a piano and a waterfall of glitter, Adele’s emotional rendition of Someone Like You was became not only the triumph of the night, but the story of the year. The track quickly soared to Number 1 on the Official Singles Chart and kick-started the monumental success of her second album 21.

When it comes to BRITs performances there are few more iconic than this Spice Girls’ 1997 showstopper. The mashup of megahits Wannabe and Who Do You Think You Are introduced the world to Geri’s union jack dress (it later sold in a charity auction for £41,320!) and cemented our love for Posh’s power poses. The girls also took home two gongs that night; Best British Video for Say You’ll Be There and Best British Single for Wannabe.

As the anticipation builds for Madge's first BRITs appearance in 20 years next week, remind yourself of this stunning performance of her Bjork-penned hit Bedtime Story at the 1995 awards:

You’d be forgiven for thinking Jacko’s wind machine-assisted performance of Earth Song was understated - but only if you didn’t watch past the three minute mark. Enter the entire cast of Oliver (we’re guessing), Jarvis Cocker shaking his bum (and the ensuing security chase) and MJ stripping down and being hugged one-by-one by all 2 million people on the stage. That. Was. Intense.

2007 saw BritPop rockers Oasis take home the Outstanding Contribution award with one half of the perma-feuding Gallagher brothers, Liam, quipping "Seeing as we don't get nominated for this s**t no more, this'll have to do." The group performed a medley of their greatest hits including Cigarettes & Alcohol, The Meaning of Soul, Morning Glory, Don't Look Back in Anger and Rock 'n' Roll Star.

Not every BRITs performance is memorable for being great. But Geri’s rendition of her chart-topping single Bag It Up between a pair of spread legs with an army of topless, greased-up hunks is something we won’t be forgetting any time soon.

Justin and Kylie went all Danny and Sandy with this mega mash-up. Well, if Danny wore white combats and a hoodie and did a beat boxing breakdown… and Sandy rapped.

Scissor Sisters lit up the 2005 BRITs with an all-singing, all-dancing farmyard. We’re talking watermelon backing singers, giant dancing eggs, the works. This is one performance that has to be seen to be believed.

Looking back at this disco cheese-fest of an ABBA tribute by the combined forces of these ‘90s pop titans, it remains as brilliantly bonkers and it is toe-curlingly awkward. Apologies to anyone who has spent time trying to erase this from their memory - and that includes Billie Piper.

From the infamous ‘net-curtains-on-face’ era of 2010, Gaga performed an emotional acoustic performance of Telephone dedicated to the late Alexander McQueen. Gaga took home all three awards she was nominated for on the night, including; Best International Female, Best Breakthrough and Best International Album for The Fame.

What are your all-time favourite BRITs performances? Let us know in the comments...