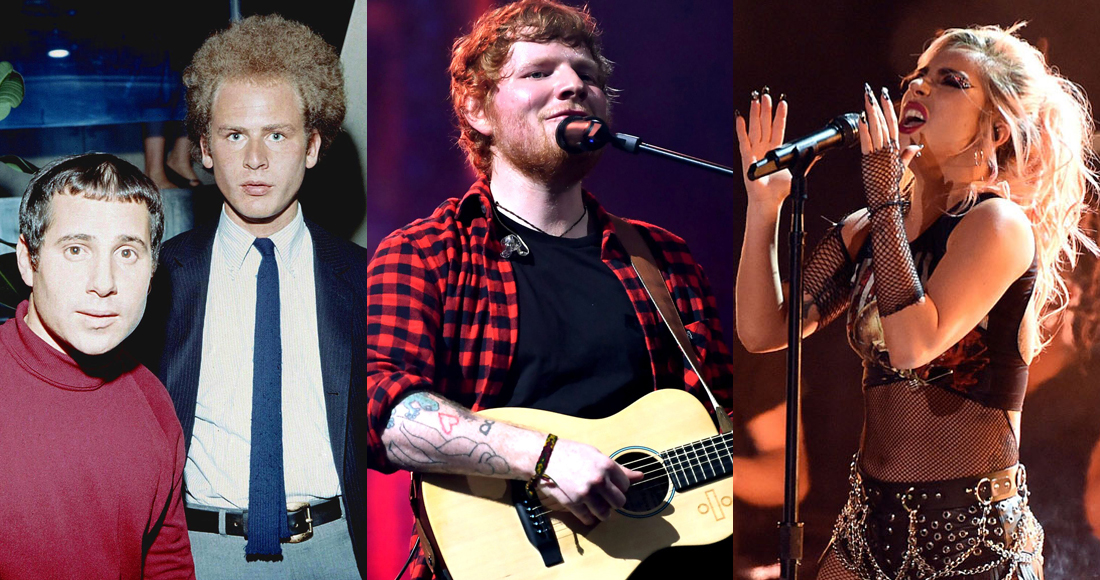 This week sees Ed Sheeran's latest album ÷ pull off the rare feat of logging a full year (52 weeks) inside the Top 10 on the Official Albums Chart.

And if that wasn't impressive enough, those are consecutive weeks - ÷ hasn't dipped lower than Number 6 since its release this time last year - check out its week-by-week chart run here.

Still not impressed? Ed's previous two albums, + and x, have also spent more than a year in the Top 10 - and he's the only artist to manage it with three albums. Check out which acts have an unbroken run of Number 1 albums here.

Excluding compilation albums, which were once eligible for the Official Albums Chart, just 22 artist albums in UK chart history have logged 52 weeks or more in the Top 10. Top of the list is Simon & Garfunkel's 1970 album Bridge Over Troubled Water, which to date has spent a massive 135 weeks in the top tier (that's just over two-and-a-half years!), 33 weeks of which were at Number 1.

Ed's second album x is the second longest Top 10 runner at 98 weeks (74 of which were consecutive), and Michael Jackson's Thriller is in third at 88 weeks, eight of which were at the top spot.

Elsewhere, Adele's second album 21 has notched up an impressive 77 weeks to be the longest-running female album in the Top 10, closely followed by Sam Smith's In The Lonely Hour at 76 weeks. Check out the female artists with the most UK Number 1 albums here.

Four greatest hits albums have logged more than a year inside the Top 10: The Carpenters' Singles 1969 - 1973, Simon & Garkfunkel's Greatest Hits, Abba's Gold and The Best Of The Beach Boys Vol.1. Two of those, Simon & Garfunkel and Beach Boys, peaked at Number 2 on the chart, proving you don't always need to reach Number 1 for longevity.

See the complete list of artist albums below - and the full list including 'Various Artist' compilation albums that were chart eligible in their day beneath that.