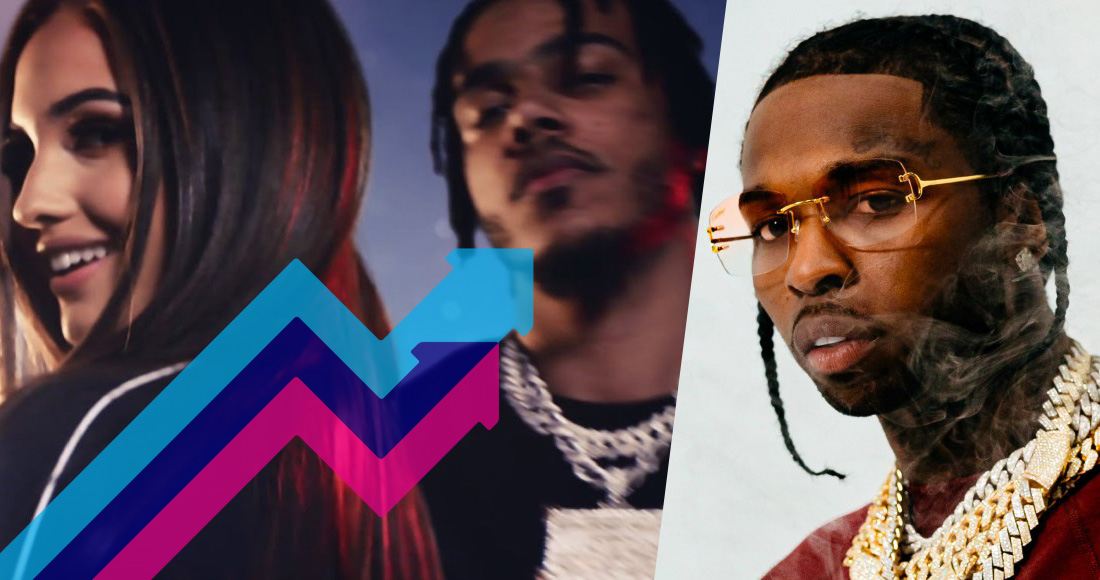 AJ Tracey and Mabel have gone straight to Number 1 on the Official Trending Chart with West Ten.

The pair join forces for the first time since 2016, when Tracey appeared on the Cadenza remix of Mabel’s single Thinking of You.

This garage-inspired track, which makes multiple references to Aj Tracey’s huge 2019 single Ladbroke Grove (which peaked at Number 3), is on course for a Top 10 debut, currently sitting at Number 7.

It’s AJ’s third official single this year following Top 5 hit Rain with Aitch and Dinner Guest with Mostack, which is currently inside the Top 10. Mabel’s previous offering in 2020, Boyfriend, peaked at Number 10 in April. See where all of Mabel's singles have charted here.

Both artists featured on BBC Radio 1's Live Lounge Allstars, who went to Number 1 in May with a charity cover of Foo Fighters' Times Like These.

Video warning - contains bright flashing lights and may affect those with photosensitive epilepsy.

Elsewhere on this week's trending chart, Pop Smoke takes two places on this week’s Official Trending Chart following the release of his posthumous album, Shoot For The Stars, Aim For The Moon. The Woo is on course for a Top 10 debut – at Number 10 midweek – while For The Night is close behind with a potential entrance at Number 13.

Pop Smoke died in February this year aged just 20 during a home invasion. His previous album Meet the Woo 2 was released just twelve days before his death, and peaked at Number 16 following the event.

DJ/producer Joel Corry returns to the trending Top 20 with his new single Head & Heat, a collaboration with singer, songwriter and producer MNEK, who is set to land his first Top 40 single in three years with the track, following his Stormzy hook-up Blinded By Your Grace in 2017.

Songs that are rising fast include What’s Poppin by American rapper Jack Harlow, and two numbers by Will Ferrell & My Marianne from the Eurovision Netflix film, The Story of Fire Saga.