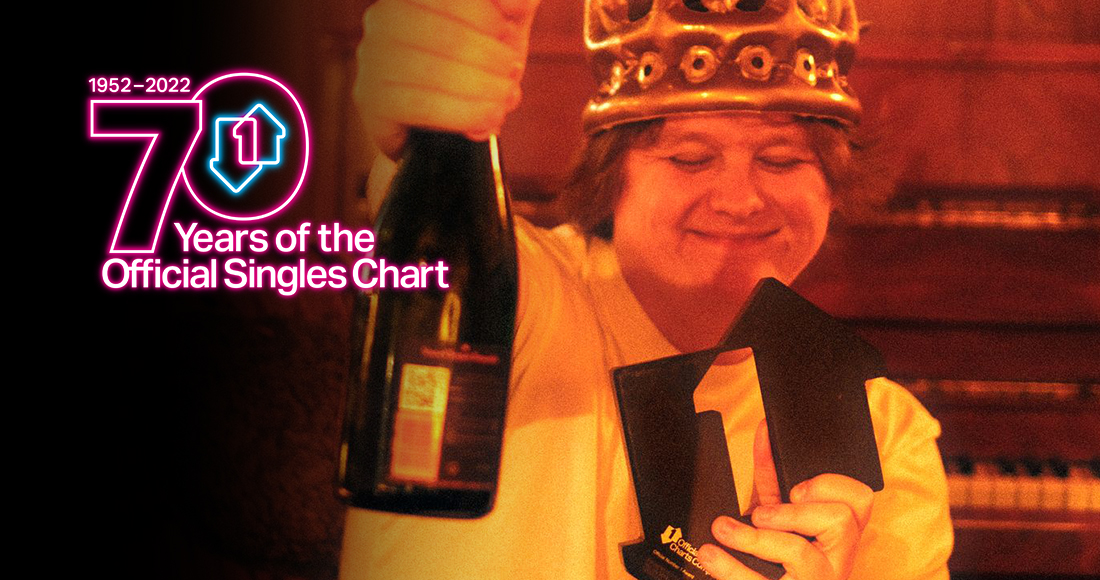 Bow down to your new King!

Lewis Capaldi makes Official Chart history as Someone You Loved overtakes Ed Sheeran's Shape Of You to become the UK's official most-streamed song of all time. The Official Charts Company confirms the new streaming record today,  on the 70th birthday of the Official Singles Chart.

Having amassed a staggering 562 million streams (UK audio and video streams combined) to pull off the chart feat, the newly crowned ‘king of streaming’ Lewis Capaldi sports an inflatable crown and a special-edition matte black Number 1 Award gift from the Official Charts Company for the momentous occasion.

Very fetching, if you ask us.

Speaking exclusively to OfficialCharts.com about his amazing, record-breaking achievement, Lewis said: "I’m the streaming king! In the UK! On this particular song! I feel huge, I feel massive, I feel my loins expanding as I become more and more aware of the reality of my coronation as the king of music.

"Thank you. A very large accolade that I will now shoulder for the rest of my life...or until Ed Sheeran releases his next album.”

The Scottish singer-songwriter's breakthrough hit first scraped into the Official Singles Chart at Number 100 back in November 2018, before steadily ascending to victory over the next few months. Someone You Loved eventually topped the chart in March 2019 where it spent seven weeks at Number 1, and has now gone to become the most-streamed song of all time in the UK. See where all of Lewis Capaldi's hits charted.

Someone You Loved pushes previous record holder Ed Sheeran down into second place in the all-time list with 2017's Shape Of You, and a further placing for Ed at Number 3 with his 2017 Christmas Number 1, Perfect.

Watch our exclusive interview with Lewis Capaldi reacting to the news

Read our exclusive interview with Lewis Capaldi below.

Lewis, do you have any words for the chart titans you've overtaken with this new title (and very fitting crown?)

Listen…The Beatles, Drake, Metallica, The Eagles, Michael Jackson, don’t worry guys, no hard feelings, I just had to take this one. Take a step back and let Daddy steer the ship now, ok?

Do you have any words for your good mate Ed Sheeran, who you've overtaken?

Ed’s a man who is like a brother to me, he’s been a mentor, he’s put his arm round me and said don’t worry everything’s going to be ok. He gave us the honour of supporting him on the closing shows of the Divide tour, he’s been nothing but kind and gracious and beautiful, a good friend in an ever-changing industry. So to Ed I say ‘EAT MY SH*T! That’s what happens…nice guys finish last. You snooze you lose, kiddo. Keep up!

And do you have any parting words of wisdoms for other artists looking to one day strive for this kind of UK chart success?!

When life throws an obstacle in your way, when you’re down in the dirt, you’re on your arse and life’s kicking sh*t up in your eyes, when your chips are down, and your family has deserted you, when your friends are all dead from nuclear fallout, what I want you to do is reach deep down inside yourself, reach deep, deep down to the deepest point in your heart and soul and GIVE THE F*CK UP. That’s what I want you to do.

There’s only one king in town and his name’s Lewis Capaldi! Our new streaming king Lewis Capaldi poses with his personalised matte black Official Number 1 Award as Someone You Loved becomes the UK's most-streamed song of all time (Credit: OfficialCharts.com)

Lewis’s Someone You Loved tops a newly unveiled list of the UK’s Top 200 All-time Most-streamed Songs, compiled by the Official Charts Company to celebrate 70 Years of the Official Singles Chart.

As well as huge contemporary hits from the likes of Capaldi, Ed Sheeran, George Ezra, Lil Nas X and Billie Eilish, a range of blockbusting earlier classics make the cut too having transcended their original formats to find success in the streaming age, including The Killers’ Mr Brightside, Oasis’ Wonderwall and festive classics from the likes of Mariah Carey and Wham!

See the list of the UK's Top 200 most-streamed songs of all time here.