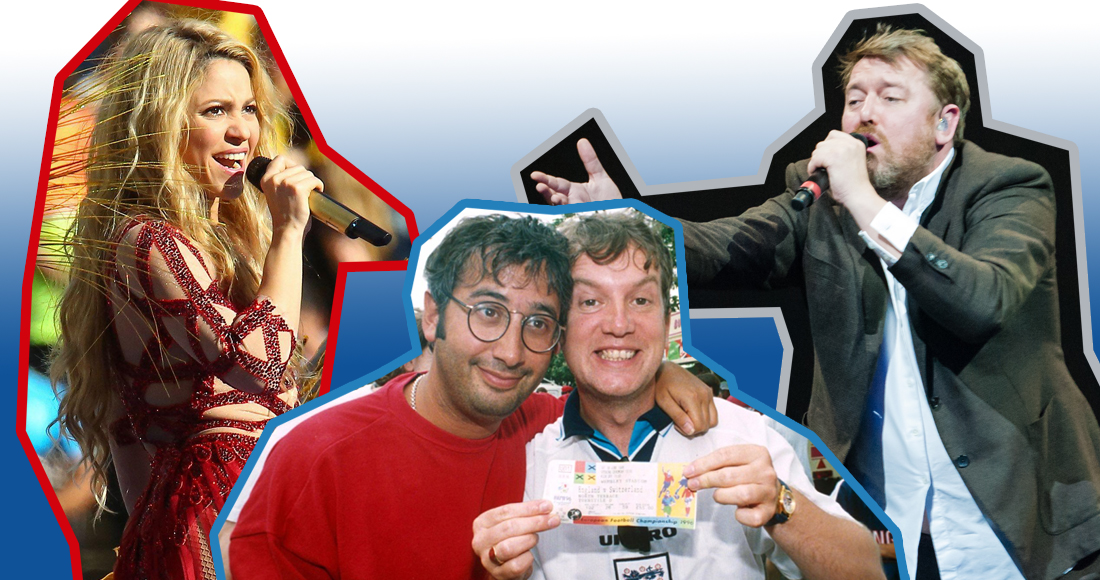 As Will Smith announces his huge return to music with the official theme to the 2018 World Cup, we look at other sport-inspired tunes that found themselves with a podium place when it came to chart success.

While not the official anthem for the Rio 2016 Olympics, Katy Perry's Rise was  the theme for NBC's coverage of the games.

It debuted at Number 1 in Australia a week after its release, and entered the Top 40 just about everywhere else, peaking at 25.

David Guetta ft Zara Larsson - This One's For You

The official tune for Euro 2016 in France came from the nation's very own maestro jockey of the discs, David Guetta. In keeping with the international theme of the tournament, David teamed up with rising star Zara Larsson of Sweden.

Unsurprisingly, the track was a hit across Europe, topping the charts in France, Germany, Portugal, Switzerland and Luxembourg - and topped out at Number 16 on the Official Singles Chart.

So popular it's been in the Top 40 every World Cup year since 1998, this classic anthem was written for the Euro 96 football tournament. It's the bestselling football anthem and, indeed, sport-themed song in the UK. Hitting Number 1 in 1996 and then again in 1998, we dug a little deeper into the song's history to mark it's 20th anniversary. Maybe it can be re-released with "30 years of hurt" swapped out for "it's now flaming well 50 years of hurt, what is going on?!" Our four nations' World Cup track record, 20 years of UK Eurovision misery – when will the UK catch a break?

It wasn't the official song of 2000 Sydney Olympics (that honour went to Tina Arena's The Flame), but Vanessa Amorosi's Absolutely Everybody was arguably the peoples anthem of the games, taking off across the world after her performance at the 2000 opening ceremony.

Peaking at Number 7 on the Official Singles Chart and hitting the Top 10 in six other countries, there was a period when the song became the unofficial anthem of just about everything.

Eternally linked to Liverpool Football Club, their official anthem is the second biggest selling football song of all time in the UK. It's topped the charts twice – first the million-selling version by Gerry & the Pacemakers in 1963, and again in 1985 by The Crowd, a starry charity version in aid of the Bradford City fire appeal.

Written for the 1992 Barcelona games, this latin-flavoured track (the title translates as Friends for Life) was helmed by Andrew Lloyd Webber and written by the legendary Don Black. In fact, the song was so popular with former International Olympic Committee president Juan Antonio Samaranch, it was played at his funeral at 2010. The British public also seemed pretty taken with it at the time, peaking at Number 11 on the Official Chart.

Whitney Houston - One Moment In Time

While not an 'official' theme of the Olympics, Whitney's classic chart-topper – her third in the UK – has been soundtracking montages of athletes fist-pumping the air and throwing javelins for almost 30 years. Admit it: you've played this song when standing on a bucket in the back garden pretending you've won a gold medal after a particularly exhilarating game of rounders.

We think we've got something in our eyes. 😭

La Copa de la Vida – or The Cup of Life as it's known in English – was the soundtrack song for the 1998 World Cup held in France. Ricky Martin put his pipes to good use for this one, and it topped the charts in 18 countries. It sadly stalled in 29 in the UK. I take it we're more of a She Bangs kind of nation.

Shakira loves having a go at a World Cup song, her first foray coming in 2006 when the Bamboo Mix (us neither) of Hips Don't Lie was used as part of Germany's 2006 World Cup campaign. In 2014, she released an edit of Dare (La La La) for Brazil's turn to host.

In 2010, Shakira struck gold, well, everywhere but the UK anyway. Waka Waka was HUGE when South Africa held the tournament. In the year people were introduced to the vuvuzela, the track reached Number 1 in 15 countries, but only limped to 21 here.

MORE: Take a look back at Shakira's UK chart legacy, including 12 Top 40 singles.

Another musical gem from South Africa's spectacular, K'Naan's Wavin' Flag was a much bigger hit than Shakira's in the UK, hitting the lofty heights of Number 2.

It's their signature song, but Let's Get Ready To Rhumble wasn't Ant and Dec's only UK chart hit. Before Let's Get Ready To Rhumble hit Number 1 in 2013 after the Geordie Duo performed it on their show Saturday Night Takeaway, We're on The Ball was their highest charting single for 11 years. Released in 2002 in aid of the World Cup, this catchy one peaked at Number 3.

Written for the 1996 Atlanta Olympics, Reach was co-written by queen of power ballads Diane Warren. It reached Number 15 on the Official Singles Chart - while Celine Dion's slightly more memorable effort the same year called Power Of The Dream didn't chart at all...

"This is my fight song, take back my life song!" Quite appropriate lyrics from Rachel Platten's Number 1, the official theme for the 2016 Invictus Games, the competition for wounded, injured or sick armed services personnel and veterans.

Composer Gareth Malone also got involved in the Invictus spirit – he released Flesh and Blood with the Invictus Games Choir and classical singer Laura Wright, reaching 29 on the Official Singles Chart.

Every slow-mo emotional run or the crossing of a finish line seems to be soudtracked by Vangelis' Chariots of Fire instrumental. Unless Whitney's One Moment in Time is used instead.

Originally from the film of the same name, the iconic piece peaked at 12 back in 1981.

If it had always been your dream to see ex-England footballer John Barnes rapping, then your admittedly strange dreams came true back in 1990. Barnesy got busy with the MCing on New Order's World in Motion, the official soundtrack for England's 1990 World Cup campaign. The song performed much better than the England team did, giving New Order their only Number 1 single.

There was a lot of music linked to the London 2012 Olympics, but the song that charted highest after the closing ceremony was Emeli Sande's Read All About It, Pt. III. which hit Number 3. Close behind was Elbow's One Day Like This, which shot up to 4 to give them their only Top 10 after Guy Garvey's band performed it during the final parade at the Olympic Park. Interestingly, Elbow had composed the official theme for BBC's Olympic coverage that year.

Kate Bush also returned to the Top 10 that week after getting in the sporting spirit. Click here to look back at that post-Olympics chart.