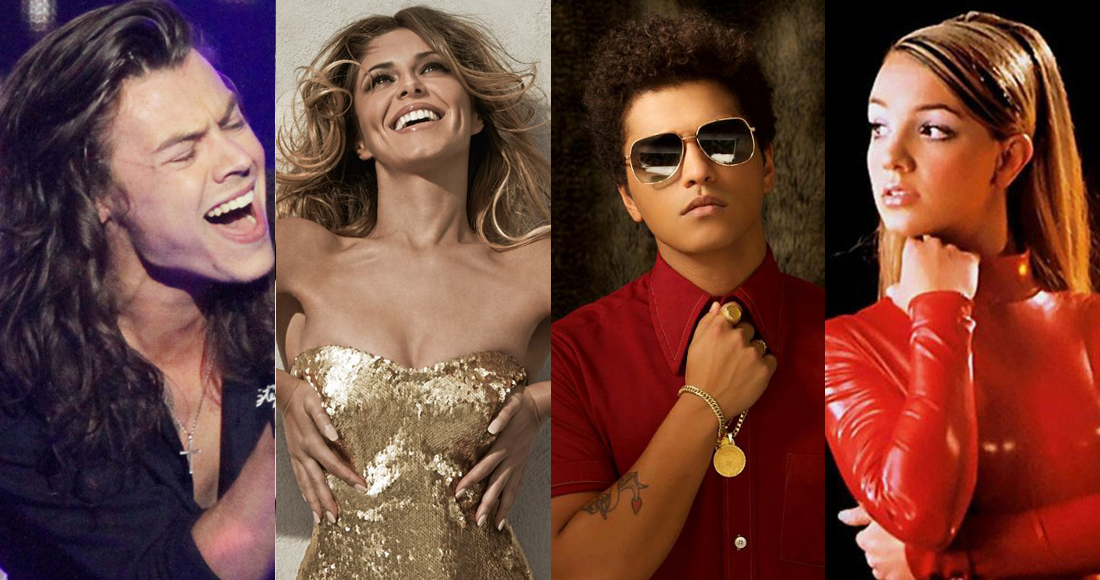 We've all got one, haven't we? One of those little quirks where you'll be singing along to a song and start reciting a bit of another song because it reminds you of it – and you just can't shake it.

Sometimes the similarity is totally obvious and everyone agrees with you, other times it seems to be unique to your ears. And sometimes, songs sound so like other tunes that things get heated and lawyers have to get into a room and work things out, whether the similarity is intentional or not.

We've looked at some songs that may not be identical, or even have that much in common, but in there somewhere is a striking similarity that we can't get out of our heads. Do you agree?

Led Zeppelin's iconic hit Stairway to Heaven had, until this month, been caught up in a six-year legal battle with Los Angeles band Spirit, who claimed the song stole the opening of their track Taurus. A US court ruled that was not the case, saving the song's writers Robert Plant and Jimmy Page millions in damages. Listen to a side-by-side comparison of the two below:

When chart titans Ed and Justin dropped their new collaboration this month, some immediately noticed a similarity in the chorus with another chart-topper - Cheryl's 2014 single I Don't Care. It's pretty undeniable, right? It's not the first Ed single to bare a striking similarity to another hit either...

Last year, Radiohead reportedly asked to be credited on Get Free from Lana's Lust For Life album because of its similarities to their song Creep. Creep itself was once caught up in a legal battle over similarities to The Hollies’ 1972 hit The Air That I Breathe, resulting in writers Albert Hammond and Mike Hazlewood suing to receive co-writing credits and a percentage of the song’s royalties (are you keeping up?).

According to Lana, the lawsuit was eventually dropped, telling fans at a gig: "Now that my lawsuit’s over, I guess I can sing that song any time I want, right?"

Our close personal Twitter friend Lakaiya reckons Rita Ora's I Will Never Let You Down and Five's Keep On Movin’ sound very similar. Was Calvin Harris, who wrote Rita's 2014 Number 1 a secret Five fan? We bet Abs was his favourite.

Two amazing pop voices and two equally brilliant songs – Kelly's Already Gone and Beyoncé's Halo aren't so much poppelgangers as your actual pop twins. Both from the bankable pen of OneRepublic's Ryan Tedder, these two songs are great in their own way, but so similar they could stand in for one another at a party and nobody would notice. Beyoncé went Top 10 in 2009 with Halo. Kelly decided against a full release for Already Gone in the UK.

Here's our pal Darren. Is he right?

@officialcharts Well, to my ears, the first vocal line on the latest Harry Styles single sounds very much like Hard to say I'm sorry by Chicago.

Remember Delta's Sitting On Top Of The World from back in 2012? (You may not, it didn't chart in the UK.) Well, doesn't it sound a little like Arcade Fire's Rebellion from 2005? Delta's song got some more attention in 2014 when a few people reckoned Kylie's Into The Blue sounded a bit like it. Lots of oooh-ing, you see.

MORE: Arcade Fire's hit songs and albums in the UK

Bruno Mars and The Police

We're sure a good clean-living, wholesome boy like Bruno doesn't have too many brushes with the law, but in this case one of his big hits, Locked Out Of Heaven, does sound quite like a couple of songs by British band the Police, who were, of course, led by Sting.

Roxanne, Don't Stand So Close To Me and even Every Little Thing She Does Is Magic. When asked about it, Bruno said he was a fan of the band but it wasn't intentional. Either way, Bruno Mars' Locked Out Of Heaven was a hit, spending three weeks at Number 2 in 2012.

Okay, how many times have you started prepping your best Sia impression only to realise it's Shape of You that's started up and not Cheap Thrills? 100? More? Us too. And if it's giving you vibes of TLC's 1999 hit No Scrubs, well, the song's writers were added to the track's credits two months after its release.

Anyway, Shape Of You was Number 1 for 13 weeks, Cheap Thrills spent four weeks at Number 2 and No Scrubs topped out at Number 3, so if the formula works, it works.

They've got a point, haven't they?

Same writer, though, you see – Swedish pop supremo Max Martin. But which song is the best? See where all of Britney's songs and albums charted in the UK here

Uh-oh, pick your corners – this is fan wars. Pretty much everyone remembers the mild stink caused when Gaga released Born This Way in 2011, the title track from her second album. Its message of motivation and self-belief was said to be reminiscent of Madonna's 1989 hit Express Yourself.

Gaga at first said it was inspired by Madge's song, then said it wasn't, Madonna herself saw into the future and realised the best way to become immortalised in a GIF was to say the word "reductive" then sip some tea. Anyway, Madonna's song got to Number 5 and Lady Gaga's peaked at 3 – just to fuel the fire a little – and they do sound a little alike, and are both great, so well done both.

Popstars are always influenced by other artists and Uptown Funk – a little-known, under-played tune you may not have heard of – certainly owed some of its swagger to the Gap Band's classic song Oops Upside Your Head from 1980. Mark, Bruno and the other songwriters agreed and credited the older track's writers.

It's all about the high-profile features! Two top tropical house tunes, each big hits, but with more than  a passing similarity that's not just about genre. Maroon 5's Don't Wanna Know, which reached Number 5 in 2016 has the "know-know-know" and Let Me Love You, which spent six weeks at Number 2 in early 2016 has the "nah-nah-nah" – sometimes that's all you need.

One's an empowering "we're through the I'm over you" anthem with a rousing chorus that would get an entire dancefloor pogoing in seconds and… so is the other. Little Mix's huge Shout Out to My Ex and GRL's debut hit from 2014, Ugly Heart, share a certain vibe and would probably mix into each other very well as you danced in the club with someone else because your ex is a dog. So why not enjoy both?

What do you reckon about this one?

@officialcharts Unfaithful by Rihanna sounds like Pet Shop Boys song It's A Sin.

Both confessional, although the Pet Shop Boys are definitely feeling a lot less guilty about being bad to the bone than RiRi.

When Zayn and Partynextdoor's Still Got Time starts up, do you not – for just a second – think it might be Drake's Passionfruit?

We'll tell anyone who'll listen that Mel's 2016 comeback Anymore and Katy's 2016 comeback Chained to the Rhythm have similar elements. Sadly, the number of people who will actually listen to us say this is quite small – but seriously, as each song goes into its chorus, there is something there.

Taylor Swift and One Direction

Tay-Tay and 1D will be forever linked because of Haylor – the romance between Harry Styles and Taylor Swift that we all really need to get over. But haven't you noticed how similar Style and Perfect are? They're on similar themes and, if you think about it, Perfect could pretty much be the answer record to Style. A few mashups have surfaced online which prove that while they may not be twins, they're certainly close cousins.

Cyndi's 1984 smash Girls Just Want To Have Fun inspired a slew of hits across the 1980s and even into the '90s, but you could still feel its influence 21 years into the future when Little Mix scored a Number 1 with the similarly empowering Black Magic.