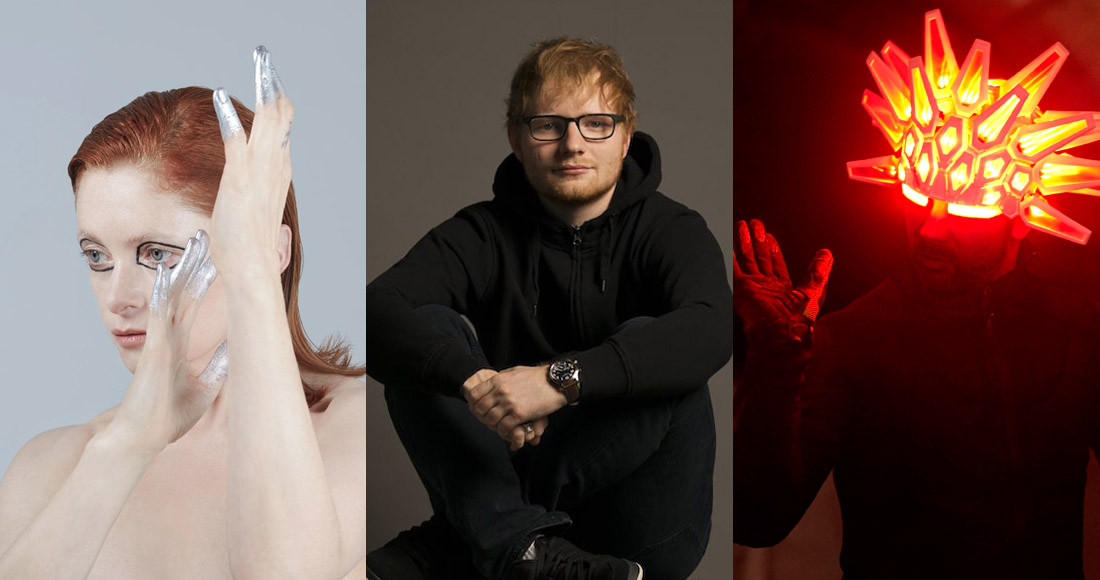 Ed Sheeran extends his reign over the Official Albums Chart for a fifth week as his latest collection ÷ logs a fifth stint at Number 1.

The record, which shifted another 108,000 equivalent units this week across physical, download and streaming equivalent sales, fends off competition from Rag’n’Bone Man’s Human (2) and Jamiroquai, who lands this week’s highest new entry at 4 with his eighth studio album Automaton.

÷ is currently the UK’s Official biggest album of 2017 so far, with 1.5 million equivalent units sold across all formats. See the full list of the year’s biggest albums to date here.

Ed also keeps his place at the summit of the Official Singles Chart with Shape Of You, scoring its 13th consecutive week at the summit, while his track Galway Girl holds in the runner-up slot for a fifth week.

Elsewhere in this week’s Top 10, Clean Bandit and Zara Larsson’s Symphony climbs a place to a new peak at Number 3, and two songs enter the top tier for the first time: Zedd & Alessia Cara’s Stay at 9, up two spots, and the debut single from Julia Michaels, Issues, shifts three places to 10.

Further down, Kendrick Lamar claims this week’s highest new entry with Humble at 21, Calvin Harris’s Heatstroke ft. Young Thug, Pharrell and Ariana Grande is new at 25, and Starley’s Call On Me re-enters at 32, up 12 places.

Meanwhile, Kidz Bop, a collection of covers for children by young stars Kidz Bop Kids, is new at 7, and American heavy metal outfit Mastodon finish just outside the Top 10 with Emperor of Sand (11).

Bob Dylan’s Triplicate – a collection of covers of classic American songs – is new at 17, Brighton rockers British Sea Power land at 21 with Let The Dancers Inherit The Party, a reissue of Fleetwood Mac’s Tango in the Night enters at 23, and UK soul group Stone Foundation score their first Top 40 album with the Paul Weller-produced Street Rituals (25).

Finally, a number of albums re-enter this week’s Official Albums Chart Top 40: Sia’s This Is Acting leaps 12 places to 31, Catfish & The Bottlemen’s The Ride rebounds nine spots to 38, Twenty One Pilots’ Blurryface is also up nine to 38, and Elbow’s Little Fictions jumps six to 39.

Remind yourself of every Official UK Number 1 album of 2017 so far: