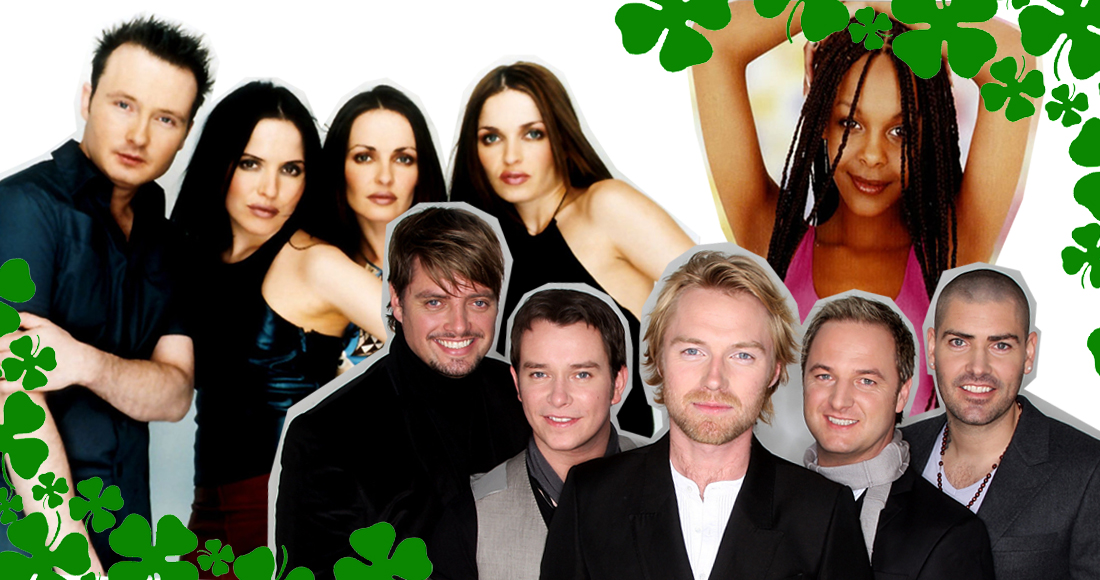 Happy St. Patrick’s Day! If you’re celebrating Irish pride today, the chances are that a.) you’ll be looking ridiculous in green b.) you’ll have a pint of Guinness in your hand before noon and c.) you’ll be getting your jig on to some classic Irish tunes.

To celebrate, Official Charts has revealed the Official Top 40 biggest selling singles by Irish acts of the last 20 years. Before we get to the full list, let’s take a closer look at some notable entries…

Taking the crown (or should that be a green, shamrock-emblazoned top hat?) for the best-selling single by an Irish act in the UK is Boyzone’s No Matter What. The ballad – written by Andrew Lloyd Webber for the musical Whistle Down The Wind - soared to Number 1 in 1998, selling 277,500 copies in its first week to become their fourth chart-topper. To date the track has sold 1.15 million copies. Just a suggestion, but if you’re adding this one to your St. Paddy’s Day playlist, we’d advise giving it a spin towards the end of the night…

They’re Ireland’s biggest band – heck, one of the biggest bands in the world – so it’s only right that there’s a generous smattering of U2 in the top Irish sellers of the last 20 years, despite many of their hits pre-dating this chart by up to 15 years. That said, their biggest here is still one of their signature hits, 1987’s lighter-waving ballad With Or Without You, which places at Number 20 with 418,000 copies sold since 1997.

Close behind at 21 with 408,000 sales is another of their best-known tracks, the chart-topping Beautiful Day, released in 2000.

Queens of double denim B*Witched claim the fourth biggest selling single by an Irish act with – you guessed it – their debut single C’est La Vie (925,000 sales). The track was a huge success in the UK, shifting 154,000 copies in its opening week alone, and brought Riverdancing to the masses across the world in the late '90s. It even reached the Top 10 in America!

Further down the Top 40, the quartet feature twice more, with Rollercoaster at 12 (510,000) and what should probably at this point be the Irish national anthem, Blame It On The Weatherman, which just sneaks in at 38 (254,000).

Given they had huge success for ten of this chart’s 20-year period, it won’t come as a surprise that Westlife dominate here. Leading 11 entries at Number 6 is Uptown Girl, their cover of Billy Joel’s classic released for Comic Relief in 2001.  It’s one of the group’s 14 Number 1 singles and has notched up 797,000 sales to date.

Further down, Westlife’s covers continue to prove their most popular songs; their 1999 cover of Abba’s I Have A Dream (a double A-side with Seasons In The Sun) finishes ninth, while their rendition of You Raise Me Up released in 2005 places 11th.

We couldn’t not mention The Corrs, could we? The sibling quartet took over the world in the late ‘90s/early ‘00s with their own brand of radio-friendly-adult-contemporary-soft-Irish-pop-rock, notching up 13 Top 40 hits on the Official UK Singles Chart between 1998 and 2004.

Check out the full Top 40 below. We don't mind telling you (because in our eyes it's a great shame) that the song just missing out at Number 41 is Zombie by The Cranberries... Gah. If you're celebrating today, may the luck of the Irish be with you!

The Official Top 40 biggest selling singles by Irish acts of the last 20 years are:

Listen to the Top 40 on Spotify below, and here for Deezer.