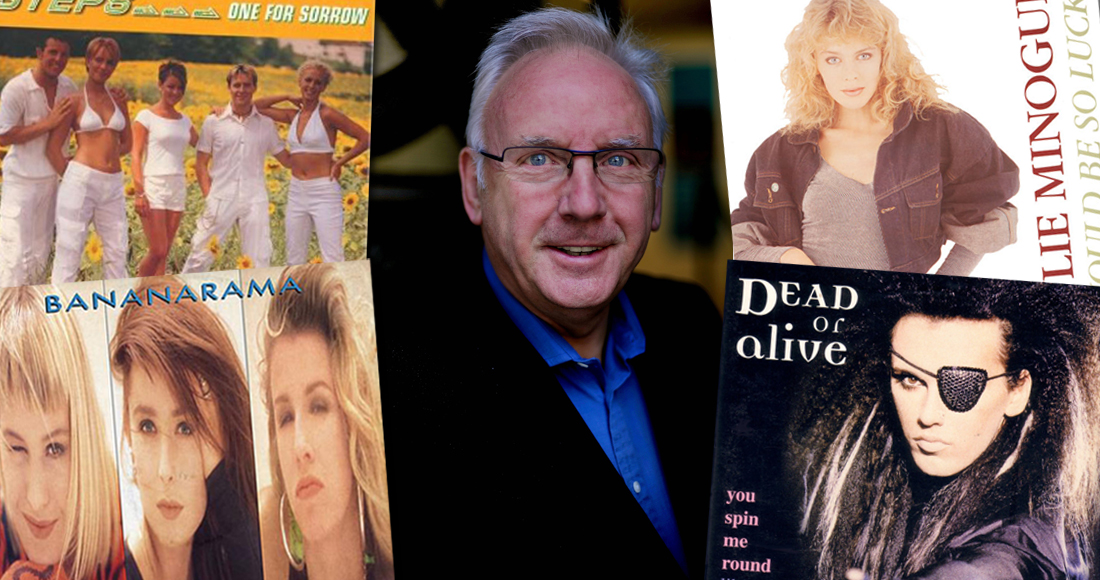 "Of course I do!" he cheerily tells us down the phone. He's promoting a new compilation of his Hit Factory classics, the Ultimate Collection, which features their 31 Top 5 hits and celebrates the 30th anniversary of two of their biggest tracks, Kylie Minogue's I Should Be So Lucky and Rick Astley's Never Gonna Give You Up.

"I wouldn’t want to do it all the time though," he adds of looking back over the past, cautiously. "It’s a privilege to be able to look back over such a career. I did a concert back in August and now this album – that’ll probably be it for the year.

"As much as the times were fantastic, you’ve got to move on. But there are people still out there who want everything we did. Honestly, it humbles me every time I see this stuff going on. I almost feel a bit embarrassed by it."

With the Hit Man having worked with an array of '80s stars including Bananarama, Sybil, Jason Donovan, Mel & Kim and (later) Steps, we asked him to talk us through some his ultimate Hit Factory moments.

“This song summed up who we were, without question. Mike and I owe them the biggest debt of gratitude for that. Without them, nothing else would have worked. At the time, you don’t know what you’re doing or what history is going to do - and at that point in our lives we’d taken a few knocks. Everything we’d tried had gone wrong.

"We were getting close to running out of money, so it’d become an ‘us against the world’ kind of thing. When we met Mel & Kim, their attitude to life down the Old Kent Road – where they lived – was just like how we were feeling - fed up. It allowed us to write songs in a way that suited us at the time.

"I remember we’d been turned down for the Record Producers of the Year at the BRIT Awards and we were shocked about that. We took an advert in Music Week that said ‘You can love us, you can hate, you ain’t ever gonna change us, we ain’t ever gonna be respectable.” Mike saw that and said, ‘that’s the song we need’.

"It was important that Mel & Kim sang it because they could carry it. Kim had been working in a knicker factory down the Old Kent Road hardly making ends meet and Mel was a struggling topless model. It was us against the world. We asked them what they got up to on a Friday night, and they said, ‘Kissing frogs – and if they’re not wearing a Rolex watch, they ain’t taking us home’. For us to hear two young women talking like that at the time was incredible to us."

Bananarama - Love In The First Degree

"My favourite group of all time. Love In The First Degree is my favourite song of theirs – I want that song played at my funeral. For a Motown fan like me, I think that’s the closest anyone has ever got to making a Supremes record that wasn’t the Supremes. I think we hit it fair and square right on the head with that record.

"Berry Gordy was on Radio 1 just after the song came out and [presenter] Simon Bates told him, ‘You’ve got a guy called Pete Waterman here who knows exactly what Motown is about,' and he said Love In The First Degree was the best song he'd never made. It was what we always set out to do and I felt like we’d achieved our goal.

"I’m not surprised they’re back together. They’re three extremely funny girls. I look back at 30 years and working with Bananarama was the best buzz because you never knew what you were going to get. They’d drive you to dementia or get you locked up – there was nothing in between. You could be outrageous when you were with Bananarama because they would be doubly outrageous. I could write a book about them, just because they’re that good of a story."

"In those days, the rules were that if you hadn’t gone up the chart, you couldn’t get on Top of the Pops. I remember when Loco-Motion went in at 2 and Yazz was at Number 1 with The Only Way Is Up and they got Top of the Pops every week, so we had no real way of promoting.

"We had a run of Number 2s with Kylie early on [Got To Be Certain, Loco-Motion, Je Ne Sais Pas Pourquoi], but you know what, I’ll take Number 2s – it’s Number 41s I hate!

"I read somewhere Kylie’s recording her new album in Nashville, which I think would really suit her. What a cute move that is. Kylie is about songs and Nashville is where you’re going to get some of the best songs on earth.

"I can’t see Kylie going back to what she did with us or later with EMI – it’s too long ago now, and Kylie doesn’t seem like the sort of person who doesn’t want to stand still."

MORE: See where all of Kylie's singles and albums have charted in the UK

Steps - One For Sorrow

"I remember being brought in the studio and being played One For Sorrow by the writers Karl Twigg and Mark Topham and that was just it as far as I was concerned. Then when I saw the video with all the sunflowers – remember videos weren't as important back then – I just thought, forget it, it’s all over.

"What’s funny is that Steps weren’t originally going be the sort of act they became. I guess that’s why everyone else turned them down and I picked them up. That’s my good luck. Had I been presented with what the other labels were presented with, I probably would have missed it too.

"It was because I walked in slightly late to their audition and they hadn’t been sold to me in any particular way, I just saw them as they were. To me, it was ABBA on speed. Their manager didn’t think it was going to be that at all.

"The reason we released 5,6,7,8 as the first Steps record was because I initially thought they could be too Stock Aitken Waterman, so we went the way we did to take it away from that sound. It sounds brilliant now, but I didn’t know at the time it would go that way. In fact, the people I did that song with, the guys were so embarrassed by the song that they didn’t want to put their song on the label, so it’s just me! I said, ‘put my name in double f**king letters then!'”

And what shoulda been a hit...

“There are quite a few where you'll always think that but the truth is, the public are always right. The charts don’t lie. People buy records because they like them. Yes, timing is important, but I watched records like You Spin Me Round take 17 weeks to get to Number 1. It got there in the end.

"There are records I’ve made that I’ve loved – the Steps record [Last Thing On My Mind] that we originally did with Bananarama got to Number 2 with Steps. When we released it with Bananarama, it did nothing. I guess you just never know, do you?"

The Hit Factory - Ultimate Collection is released on November 3.