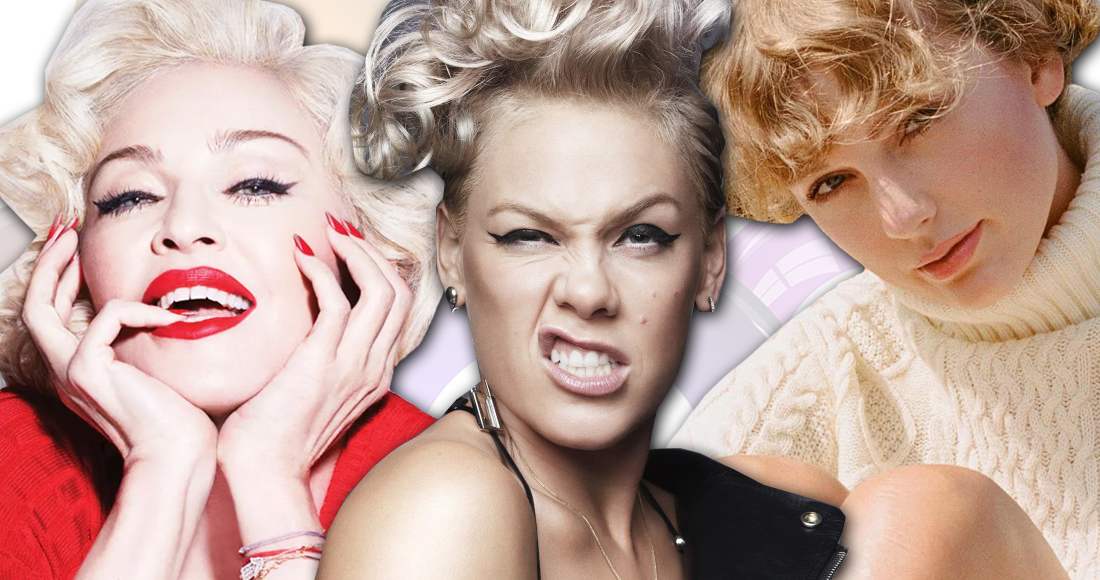 Hitting the Top 10 of the UK's Official Singles Chart is a big deal. In the competitive streaming era, a top tier single is a mark of genuine popularity; that a song has well and truly wormed its way into the ears and hearts of the general public. Back in the early 00s, anything lower than a Top 10 single for a popstar and, to borrow a line from Whoopi Goldberg in Ghost, you in danger girl.

While acts like The Beatles, Spice Girls and Westlife were more about topping the charts in their day, there are a small number of acts that have managed to peak at every position inside the Top 10. A bit like bingo. Forget a single line (stay with us), we're going to highlight the legends who have delivered a Top 10 full house.

Here's the Official rundown on the 11 acts who have impacted every slot in the Official Singles Chart's top flight. We're also going to list the artists that have a sweat on, holding out for one more hit to complete their board. Eyes down...

Scottish star Lonnie Donegan, a pioneer of the revival of Skiffle music in the 1950s, was the first artist to cross off all the numbers in the Official Singles Chart's Top 10. Not only was Lonnie the first, he did it the fastest.

My Dixie Darling (10), The Grand Coolie Dam (6), Tom Dooley (3) and I Wanna Go Home (5) occupied different positions across the next three years, before the Number 9 Donnie needed to complete the set arrived in 1962, the aptly named The Party's Over. All in all, it took Donnie six years, three months and seven days.

If you thought The King would be in this elite club, well, you would be right. With 76 Top 10 singles, Elvis Presley has had plenty of chances, and he achieved the feat in 15 years, nine months and 25 days.

Elvis' debut single Heartbreak Hotel reached Number 2, and he has of course had a multitude of hits since. He was all shook up waiting for a Number 5 to come along, but it finally did in April 1972 with Until It's Time For You To Go.

With an impressive 63 UK Top 10 hits, you would think Madonna had paid a visit to every Top 10 placing at least three times over, but in fact, she waited 11 years for a Number 8 hit (1995's Human Nature) and she's not had one since.

MORE: 60 incredible chart facts about the Queen of Pop

Madonna was the first female to shout BINGO!, but Mariah Carey can say she is the woman to claim a full house in the shortest space of time.

It took Mariah nine years, five months and 25 days to put her dabber to all of the boxes, with Thank God I Found You being her only Number 10 single in March 2000. Thank God indeed.

Sex Bomb led to a climax for Tom Jones! Over three decades after his first hit, (1965 Number 1 It's Not Unusual) the Welsh legend's 2000 smash was the missing piece to the puzzle he was looking for, a Number 3. Sir Tom completed his collection of every Top 10 place two months after Mariah, notching up a time of 35 years, two months and three days.

From one Knight of the Realm to another, Elton John adopted Tom Jones' slow and steady approach; why perform a blink-and-you'll-miss-it sprint when you can take in the good times at a leisurely pace?

Number 9 evaded Sir Elton for 29 years, four months and 2 days, but his only one finally came to him in April 2001 courtesy of I Want Love. Thanks for finally showing up!

(While Elton's Your Song was originally released in January 1971, it wasn't until July 2002 it reached its Number 4 peak, so we began his span of hits from the 1972 Number 2 hit Rocket Man.)

You wait 19 years, nine months and 25 days for a Number 5 single... and two come back-to-back! With an almost complete tally for nearly two decades, U2 completed their bingo board in December 2001 with Walk On. And for good measure, their next single Electrical Storm did the same. Bonus points as they are the only group to achieve this distinction.

Of all the ten acts to peak at every Top 10 position, three of them are Sirs, and three of them were all holding out for a Number 5. The third in each of those categories is Sir Cliff Richard.

Forgotten among Mistletoe & Wine and Saviour's Day, Cliff's Xmas hit Santa's List became his only Number 5, which we're sure was exactly what the Bachelor Boy had asked from St. Nick in Christmas 2003. In total, Cliff took the longest to pay a peak visit to every Top 10 position, taking a whopping 45 years, one month and 20 days. That Millennium Prayer paid off.

Raise your glass to this! P!nk has had a feel good time (pun very much intended) on the Official Singles Chart over the years, collecting 20 Top 10 singles so far. Much like Madonna, Pink needed a Number 8 to complete her set, and the criminally-underrated Try did just that. Who Knew (we'll stop with the puns now) it would take P!nk 12 years, six months and five days?

The latest male artist to finish his full set of Top 10 peaks is Usher. Holding out for a Number 8 for 17 years, one month and 18 days, Mr. Raymond finally scored one in March 2015 with I Don't Mind ft. Juicy J.

The most recent completist is Taylor Swift, who achieved all three of her missing Top 10 peaks in the same week! Taylor's breakthrough hit Love Story reached Number 2 back in March 2009, and in July 2020, Cardigan, Exile (with Bon Iver) and The 1 peaked at 6, 8 and 10 respectively, the exact numbers she needed to dab all of her boxes. In total, it took Taylor 11 years, 4 months and 30 days.

So who just misses out?

Cliff Richard took nearly five decades to score this chart quirk, but who else is one song away from clearing the board?

22 chart acts are waiting in the wings, with only one group waiting for a Kelly's eye - a Number 1. Bon Jovi have peaked at positions 2 - 10, but alas, they are missing a chart topper.

UB40, Cher and Celine Dion are all waiting for One Little Duck (a Number 2 peak), while Pet Shop Boys have yet to score a Number 3 single. David Bowie, Rolling Stones, Frankie Laine and Iron Maiden are all knocking at the door of Number 4, and George Michael was only missing a Number 5.

6 is the most common number causing a sweat, the missing link for Justin Bieber, Michael Jackson, Beyoncé, Status Quo, Whitney Houston and The Saturdays. The former two can claim a Number 6 in their groups The Jackson 5 and Destiny's Child however with Can You Feel It and Bills, Bills, Bills respectively. Frankie Bridge and Rochelle Humes of the latter group did manage a Number 6 also with Puppy Love/Sleigh Ride in their first band S Club Juniors.

A not-so-lucky Number 7 awaits Eurythmics, Dua Lipa and Drake, while Diana Ross and Girls Aloud - with exception of Kimberley who nabbed one solo - are looking for Number 8. Following that, Rod Stewart, Madness, The Beach Boys and Craig David are seeking a Number 9 hit.