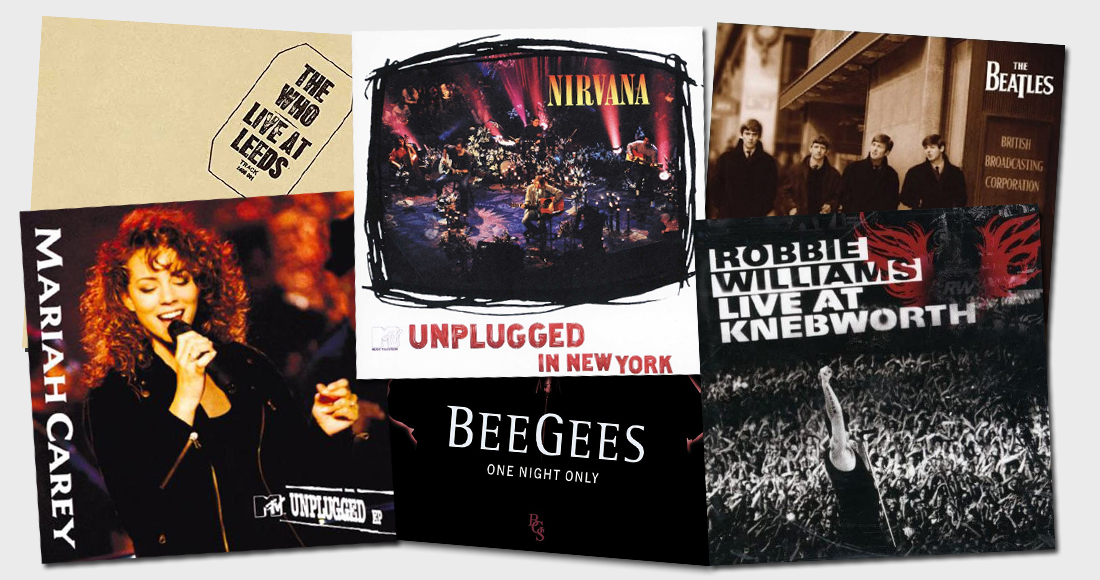 Live albums aren't to everyone's liking, but get them right and the results can be an invaluable addition to a musician's catalogue.

It's rare to see a live album reach Number 1 on the chart; releasing a live recording is often deemed unworthy of the same promotional push a brand-new studio album.

There are exceptions to that rule, however - the latest being Liam Gallagher's MTV Unplugged. Recorded live at Hull City Hall in August 2019, it's effectively a do-over for Liam after he abandoned his Oasis bandmates at the last minute for their MTV Unplugged in 1996, leaving Noel to tackle lead vocals.

Debuting at Number 1 on the Official Albums Chart, it's the first live album to hit summit since George Michael's Symphonica album in March 2014. Made up of performances of classical arrangements of his hits with vocals recorded live at London's Royal Albert Hall, it was the late singer's only live album released in his lifetime.

The UK's first Number 1 live album came from The Rolling Stones; 1970's Get Yer Ya-Ya's Out is the band's second live LP, recorded in New York and Baltimore, in November 1969, just before the release of their chart-topping studio album Let It Bleed.

Another notable Number 1 live album arrived in 1976 by Led Zeppelin. The Song Remains The Same was a recording of their Madison Square Garden concert three years prior, and includes a 29-minute version of Dazed And Confused. In 1981, Motörhead topped the Official Chart with what is considered by many as the best live album of the heavy metal era, No Sleep 'Til Hammersmith. Despite its title, the album featured live recordings from shows in Newcastle, Norfolk, Leeds and Belfast - London's Hammersmith wasn't a stop on the tour.

Fast-forward to 1993, MTV were lining up huge names for their acoustic Unplugged series, one of which was Nirvana. Unlpugged in New York was released in November 1994 - six months after Kurt Cobain's death - and features a cover of David Bowie's The Man Who Fell To Earthand Foo Fighters' Dave Grohl on backing vocals for parody song Jesus Wants Me For A Sunbeam. The album debuted at Number 1 and has 930,000 UK chart sales to date.

A decade later, in August 2004, Red Hot Chili Peppers topped the Official Albums Chart for two weeks with Live In Hyde Park. The album was a recording of their three London shows, which set records at the time as the highest-grossing concerts at a single venue in history.

The Bee Gees claim one of the UK's best-selling live albums of all time with 1998's One Night Only. The recording of their concert at the MGM Grand in Las Vegas, which features many of their greatest hits and reached Number 4 on the chart, has sold over 1.2 million copies.

Peter Frampton's 1976 album Frampton Comes Alive! is considered one of the best live records ever, logging 38 weeks in the Top 100 and peaking at Number 6, as well as producing a string of hit singles in Show Me The Way, Baby, I Love Your Way and Do You Feel Like We Do. Also highly praised is The Who's Live At Leeds. Released in 1970 and reaching Number 3, the band had gained a reputation as one of the best live rock bands in the world and proved it with this collection.

Robbie Williams' Live At Knebworth album - a recording of his three-day show billed as the "biggest music event in British history" after he played to 375,000 fans - reached Number 2 in 2003 and has shifted 638,000. Robbie's former band Take That also claim a big seller with The Greatest Day - The Circus Live album (551,000).

The Beatles also lay claim two hugely popular live albums, 1977's Live At The Hollywood Bowl and 1994's Live At The BBC, with both reaching Number 1. The latter is comprises of 56 songs, 30 of which had been been issued before, and 13 tracks of dialogue performances by the band on various BBC radio shows from 1963 to 1965.