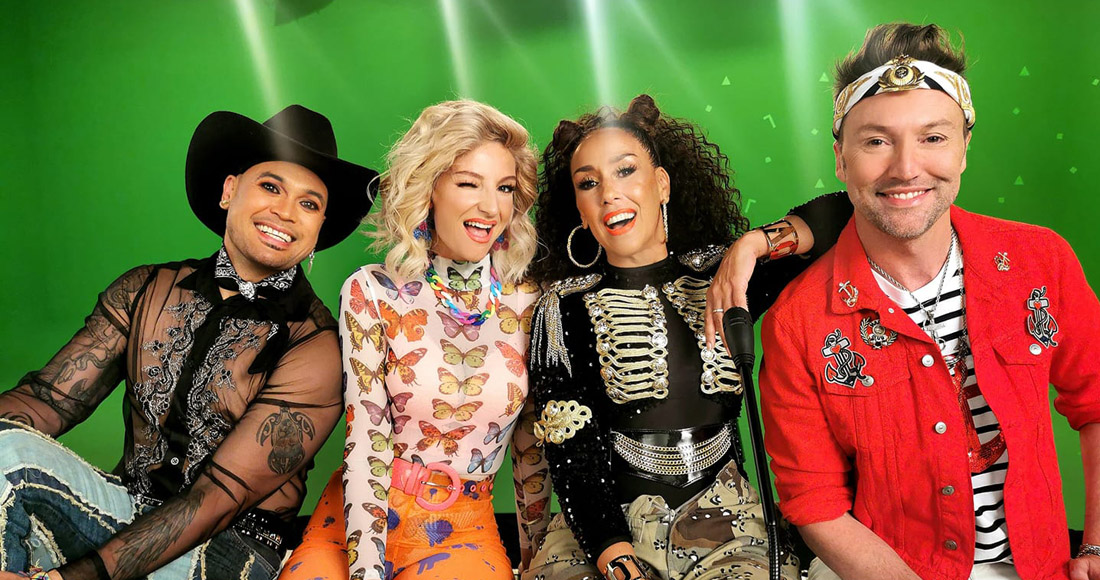 Times are tough, and Vengaboys have had enough. To alleviate our woes, the Dutch Eurodance troupe - Kim, Denise, Robin and Donny - want to take us back to the nineties; a time when they were at the very height of their powers as they trotted across the globe on their famous Vengabus.

In their quest to turn back time, they’ve released a cover of Charli XCX and Troye Sivan’s throwback smash 1999, and like the hits from their heyday, it’s a love-it-or-loathe-it affair - and comes with a music video that would cause any respected lawyer to break out in a cold sweat.

“It’s the perfect song for us - and it’s perfect timing,” Kim told us during our chat with the group over Zoom. At the time of the interview, Charli hadn’t heard their take on the song. “We’re a bit nervous,” she adds, “but hopefully we’ll make her proud.”

To celebrate their return, we’ve gone back to 1999 (and a bit before then) with the group and reminisce over their Official Top 5 biggest singles in the UK. In three years, Vengaboys notched up an impressive nine Top 40 hits on the Official Singles Chart, plus two Top 10 albums.

“We have so many memories of the nineties, that’s why we want to bring it back!” Kim explains. Looking back to our late teens/early twenties, it was a totally different ballgame. Our hearts are now filled with warmth looking back on those times.”

Kim: “Entry at Number 1! We had no idea this would be a hit, to be honest with you. At the start we were labelled as the most loved and the most hated band in pop. When you’re young you tend to believe that. With every song we put out we thought it could be the last, so let’s just enjoy it while we can. People kept telling us we were the next one-hit wonder. But they were wrong!

“My favourite memory of the song is when we were touring in America, which was amazing as four young people – our first time in America! – and touring radio shows with Christina Aguilera, N*Sync and Ricky Martin. One day we had a conference call with our management in Holland and they told us we were Number 1 in the UK. We were like, ‘we’re set for life!’ The UK market is probably the most important and influential in Europe. We were so happy.

"Oh, and there is a story behind the ABBA interpolation (the first verse interpolates ABBA's Lay All Your Love on Me), but if we told you we would have to kill you.”

Robin: “This was – and still is - a workout to perform. We’re still dancing to Up and Down like we’re in our twenties.

Kim: “Up and Down was definitely our big break. I can remember from the moment we hit the charts with it, the fax machine – remember those? – was going 24 hours a day, from that moment. So many requests. From then it was worldwide, global domination.

Kim: “This was our highest charting song in America.” (it reached Number 26 on the Billboard Hot 100).

Denise: “The reason was because We Like to Party was the theme song for a Six Flags advert, so everyone their knows the song from that commercial.

Robin: “People loved or hated us. It was the story of the time. Thankfully now that has changed and everyone seems to love us."

Kim: “But as a 22-year-old girl, hearing from a British journalist, ‘How does it feel to be the most loved and most hated artists in pop right now?’ I was like, ‘[gasp] Are we hated?!’ I didn’t realise that, but it was true. It was so good there was no social media at that time because there would have been so many trolls. And now, I can honestly say we don’t have a lot of trolls. We’re retro, nostalgic, people want to look back at those times.”

Kim: “We lived off daytime napping by this point. Especially during the US tours, which were gruelling. In America, they actually thought we were singing ‘Woah we’re going to eat pizza’. What’s the Mediterranean sea? They didn’t know. In the Billboard charts, we were like the ugly ones. It was mainly R&B pop. There was no Euro…trash in there. There, I said it!"

Robin: “We didn’t even have time to record a video so someone drew one for us. I remember doing all the promotional stuff in the UK for that single in Ibiza itself. Guys like you – Smash Hits, FHM -  would be flown out by the label to Ibiza and put up in a villa and interview us. That’s what was so good about 1999 – you could come and party with us. Now we’re zooming from our homes.”

Kim: “That was the first single of the third album. That was an exciting time for us because it was something new and a bit different sound-wise. We even got to shoot the music video in Tokyo, which was like a dream come true.  It was exciting to see if the audience would still buy it and they did, but not as much as the songs from the first album.

“Everything went downhill after the millennium – especially in the music industry, when sales went down massively. We still did loads of great shows, and then it stopped. We had a break for two years. Then, the UK came with the whole nineties vibe in 2004 and we were asked to come back and play lots of shows - mostly universities, Butlins and Gay Pride. Now we’re evergreen!