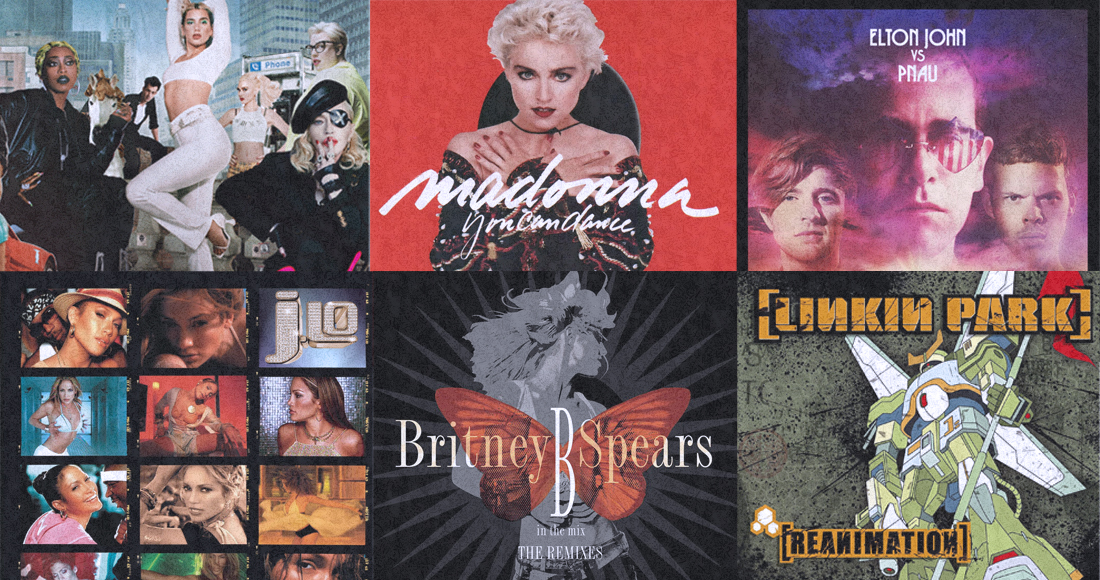 The remix album is a curious beast. On one hand, they can be considered an easy cash-in for an artist and their label, snapped up for the most part by eager, completist fans. But done well, they can breathe a second lease of life into a record, reimagining tracks in new contexts and bringing the music to a new audience.

Many remix albums released in the ‘70s and ‘80s were viewed (cynically, perhaps) as opportunistic retools, designed to put songs on dancefloors that had no business being there in the first place. There were a few exceptions; Human League’s Love And Dancing (released under the moniker The League Unlimited Orchestra) released in 1982 and Pet Shop Boys’ 1986 remix collection Disco were seen as heartfelt attempts at adding new layers to their compositions.

This month Dua Lipa releases Club Future Nostalgia, a collection of remixes of songs from her latest album. It’s not out until August 28, but as far as remix albums go, it’s already blockbuster; featuring pop icons Madonna, Missy Elliott and Gwen Stefani amongst trusted reswizzlers Mark Ronson, Jamiroquai and The Blessed Madonna.

Dua Lipa isn’t the only artist to go big on a remix album. Below is a look at a selection of the best, biggest and highest-charting remix albums.

Madonna’s first remix album set the bar for how it should be done. You Can Dance contains remixes from her first three albums (though the focus was on her self-titled 1983 debut) and a new track, Spotlight, all re-worked with the help of producer John “Jellybean” Benitez and True Blue producer Patrick Leonard. Many of the well-known tracks – including Holiday and Into The Groove – feature completely new elements, a relatively new concept at the time. You Can Dance reached Number 5 in the UK and is reportedly the second best-selling remix album of all time globally, with estimated sales of 5 million.

Produced by George Martin and his son Giles, Love remixed Beatles classics - including Eleanor Rigby, Strawberry Fields Forever and a mashup of Blackbird/Yesterday - for a Cirque du Soleil Vegas show of the same name. The collection debuted at Number 3 on the Official Albums Chart and is the UK’s biggest remix album of the last 20 years, with 864,000 chart sales.

Jennifer Lopez's remix album was, in part, a savvy sidestep to place her in the popular US hip-hop market; featuring complete re-workings (in some cases, only the titled remained the same) of singles from her first two albums. Joining forces with Ja Rule and his Murder Inc. Records label, Jen launched the album with the Murder Remix of Ain’t It Funny, transforming the earthy latin-pop original into a sassy and strut-worthy R&B song, heavily aided by Ashanti, who provided new lyrics and backing vocals. That song, plus similar re-workings of I’m Real and I’m Gonna Be Alright, were all Top 5 hits in the UK, while the album topped out at Number 4. It’s UK tally stands at 452,000 chart sales.

Linkin Park’s first remix album was an entire re-work of their hugely successful debut Hybrid Theory. Produced by Mike Shinoda and mixed by Mark "Spike" Stent, the rap-rock collection fused big names and newcomers in hip-hop with nu-metal heavyweights, including Marilyn Manson and Jurassic 5’s Chali 2n, helping to push the band into new territories. Reanimation peaked at Number 3 on the Official UK Albums Chart and has 301,000 chart sales.

For the most part, Massive Attack’s second album Protection – the much-anticipated follow-up to their highly influential debut Blue Lines – was well received by critics. For those who weren’t completely satisfied with it, the entire record was remixed by dub producer Mad Professor, who took the songs back to the band’s early sound. The remixes were quickly added on to the original album, sending it back into the Top 10, while its overall UK chart sales stand at 653,000.

Featuring remixes of hit singles by artists from P. Diddy's Bad Boy Records record label, We Invented The Remix topped the charts in America and reached the Top 20 in the UK, spawning a huge hit single with I Need A Girl (Part One) ft. Usher and Loon. It's UK chart sales stand at 178,000.

Michael Jackson – Blood On The Dance Floor: HIStory In The Mix
Released: 1997

Featuring eight snappy remixes and five original songs, including the title track, Blood On The Dance Floor was a big success in the UK, scoring two weeks at Number 1. It didn’t fair so well in America, where the public seemed both confused by the hybrid release and pre-occupied by controversial stories about him in the press, and stalled at 24. While its UK chart sales are 283,000, its global sales are reportedly six million, making it the most successful remix album ever.

Predominately made up of extended mixes of their popular hits, Mixed Up may not be the most inventive remix album but succeeds in putting The Cure in a new light, particularly after 1988’s gothic-rock Disintegration album.

Britney Spears’ two remix albums each have their interesting moments amongst the standard club fodder. Volume 1 includes a moody Junkie XL remix of previously unreleased song And Then We Kiss, while Jason Nevins’ take on In The Zone album track Early Mornin’ is easily superior to the under-baked original. Highlights on volume 2 include a euphoric spin on Gimme More by Kaskade, a disco take on If U Seek Amy and a beefed-up radio mix of overlooked single Criminal.

Elton John vs. Pnau – Good Morning To The Night
Released: 2012

Helmed by Australian dance duo Pnau, Good Morning To The Night features eight tracks each interlaced with samples from various Elton John tracks from the early 70s to create entirely new songs. Pnau had been under the mentorship of Elton for five years previously, and this highly ambitious project was the result of being given access to his archives, digging out the original tapes and employing a cut, paste and stitch process to create something refreshingly unpredictable. The result was a success, becoming one of the few remix albums to reach Number 1 on the Official Albums Chart.

Inspired by his longstanding affection for jazz-funk singer Gil Scott-Heron, Jamie xx re-worked several of his songs for an album, communicating with Gil through letters to gain his approval. In contrast to the US singer’s stark, lo-fi style, We’re New here is laden with samples (including Gloria Gaynor’s Casanova Brown on the title track), dubstep tones and dance-influenced tempos – best showcased on I’ll Take Care Of You.

Janet rarely strays from the dancefloor, making her a popular choice with DJs. Her second remix album features 90s house reworks of songs from her chart-topping fifth album janet., including That’s The Way Love Goes and a seriously bouncy version of If by Brothers In Rhythm. The record also features two non-album B-sides, And On And On and the seriously sensual 70s Love Groove. Released almost two years after janet., Remixed was added on to a re-release of the record in the UK, sending it back to Number 15.