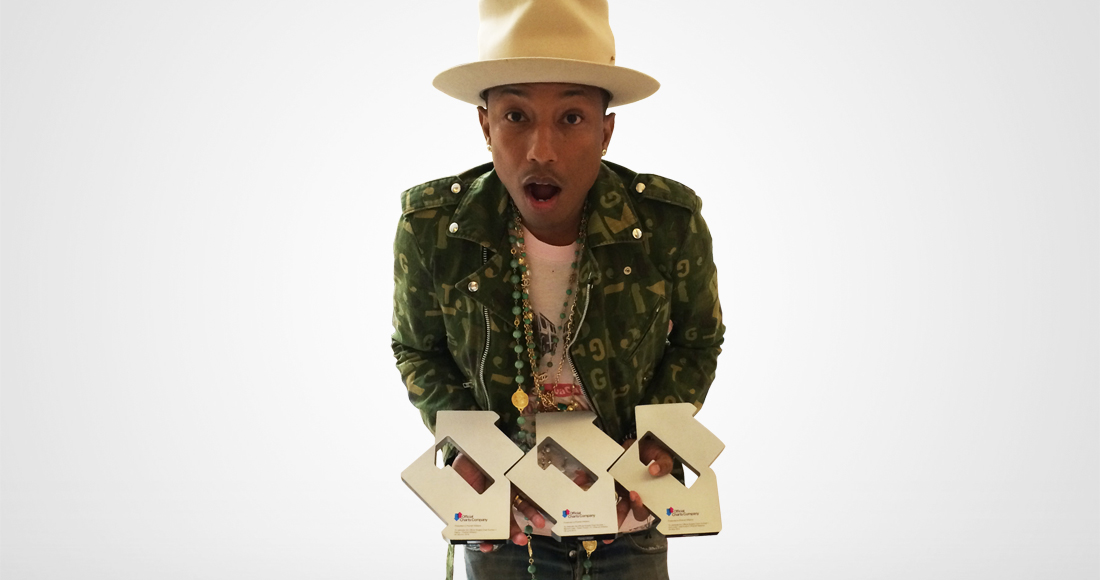 Hats off to Pharrell Williams, as Happy is revealed as the UK’s most downloaded track of all time as the Official Download Chart celebrates its tenth anniversary this month.

Ahead of his appearance at tonight's iTunes festival, OfficialCharts.com can confirm that Pharrell Williams’ Happy is the most downloaded track of all time, having now overtaken Robin Thicke’s Blurred Lines, according to a new countdown compiled by the Official Charts Company.

Happy has sold 1.62 million copies since it was released in June last year as part of the Despicable Me 2 soundtrack, and later as the lead single from the star’s second solo album G I R L.

The news comes exactly 10 years after the UK’s Official Download Chart launched back in September 2004.

Pharrell is pictured above with three Official Number 1 Awards from the Official Charts Company to celebrate the outstanding sales success of Happy, Blurred Lines and Get Lucky - all three tracks feature Pharrell and today take their place in chart history as three of the UK's 10 best-selling downloads of all time.

Pharrell tells OfficialCharts.com: "I would just like to say thank you, first and foremost, to the people, because the charts are determined by them. I have a lot to be thankful for because they’ve chosen these things and it’s resulted in Happy being what it’s become.”

He continues: “The people of the UK have been so supportive of me over the years, allowing me to be an artist and allowing me to work with other people and supporting what it is that I do. That’s the lifeline, without them you’re just a musician with a couple of ideas but with them, that is the thing that changes everything when they get involved, your little idea can become something, so …thank you!’'

"Immense congratulations to Pharrell Williams. To have a staggering three tracks among the all-time Official Download Chart Top 10 plus the biggest-selling download of all time with the much-loved Happy, is quite remarkable. Few artists have ever dominated an era as he has done over the past 18 months – he is a true phenomenon of our times."

Colin Barlow, MD RCA Label Group UK, adds: "It is so refreshing that a song that can create such joy can go on to become the biggest-selling download of all time. Happy is the perfect song to restore positivity. We congratulate Pharrell on this milestone achievement."

Happy overtakes the previous biggest-selling download, Robin Thicke’s Blurred Lines, which has sold 1.59 million copies to date and also features Pharrell, who co-wrote and produced the track. In fact, prolific Pharrell has played a role in an astonishing three of the UK’s Top 10 biggest selling downloads, having collaborated on Daft Punk’s Get Lucky also which sits at Number 6 in the list with digital sales of 1.4 million.

Happy has become a genuine phenomenon since its release, shifting over one million copies in less than 12 months, it was Pharrell’s third hit to cross the mark in the same 12-month period, The Beatles are the only other act in chart history to have managed this. And the chart records don’t stop there, Happy has topped the charts on three separate occasions – making Pharrell only the third act to achieve such a feat!

Meanwhile, the third biggest-selling download of all time is Adele’s Someone Like You with 1.53 million downloads, and Maroon 5’s Moves Like Jagger - one of only a handful of million-sellers not to top the chart - is fourth with sales of 1.47 million.

Completing the Top 5 is Gotye and Kimbra’s 2011 hit Somebody That I Used To Know, which topped the Official Singles Chart in February 2012 and has sold 1.45 million copies to date.

The legitimate digital music market took off 10 years ago this year, with the launch of a number of download stores including iTunes Europe, 7Digital Music and MyCokeMusic (a service launched as part of Coca Cola’s sponsorship of the Official Singles Chart). The Official Download Chart was subsequently introduced shortly after, in September 2004, and is published weekly here.

Check out the all-time Official Download Chart Top 100 below: