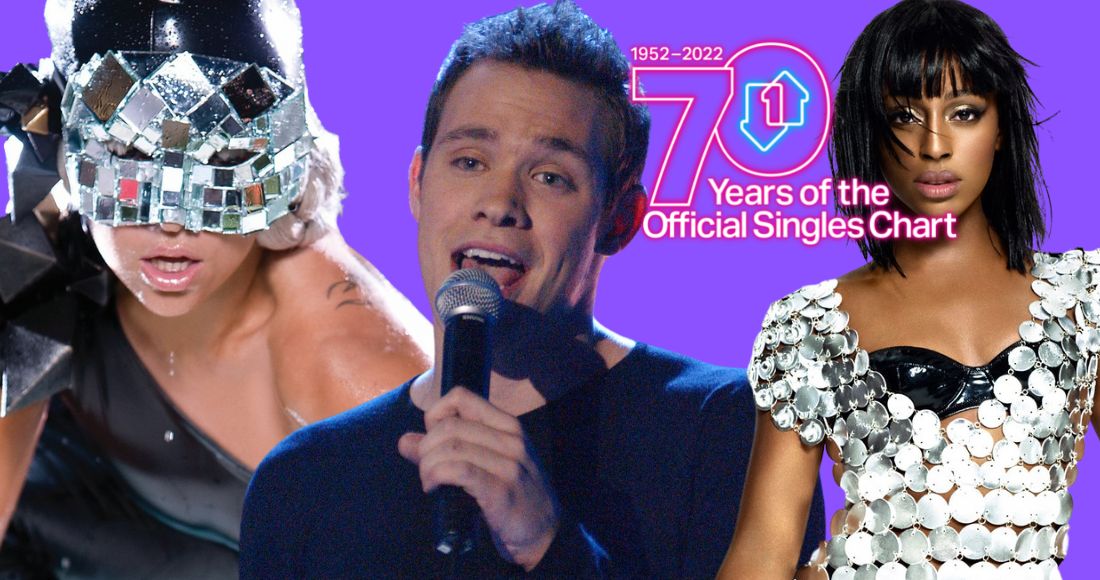 When we entered a new millennium, so did pop music. And my, how did it shift and change through this decade! Not only did we see the rise of reality TV as the most engaging way for emerging artists to enjoy chart success, to the turn of the decade where an explosion of 80s-influenced dance-pop birthed superstars like Lady Gaga, Rihanna and Katy Perry; who would go on to become the faces of this new movement of pop well into the 2010s.

Disclaimer: This is a list of the best-selling singles released from 2000-2009, compiled from Official Charts Company data representing pure, physical sales from 2000 - 2022.

If Just Dance was the effervescent start to the party, then sister single Poker Face was the soundtrack to the after-party that continued well into the night.

Sexy, sensual and charged by a ferocious, precocious energy, the Eurodance anthem celebrates Lady Gaga's sexuality, and marked her true emergence as an enigmatic new idol for pop fans to obsess over.

The story of how Can't Get You Out Of My Head made its way to Kylie is almost as interesting as the song itself; written originally for S Club 7 and rejected by Sophie Ellis-Bextor, the song made its way to Kylie as she was on a massive come-up following her successful pivot back into commercial pop with 2000's Light Years.

Hypnotic, engrossing and still sounding just a little bit like the future, this bold mid-career swing would prove once and for all that no-one embodies the image of a pop star quite like Kylie when she's firing on all cylinders.

Chasing Cars holds the distinction of being the lowest-peaking song of any across our decades best-sellers lists, managing a peak of Number 6 on the Official Singles Chart.

It may have never climbed higher, but it became the defining hit of Snow Patrol's career, and even just hearing a snippet of the track now is guarenteed to take you back to the mid-00s.

Given how deftly engaging Alexandra Burke was as a pop star during her time on the X Factor - perhaps the only contestant to ever master the art of singing and dancing at the same time quite so well - it's still surprising that this morose cover of a Leonard Cohen classic (covered famously by Jeff Buckley) was her winner's single.

But Alexandra had her moment, and she took it. Her take on Hallelujah feels rich in meaning and emotion; almost like a hymn. Debuting at Number 1 in the UK, it would give Alex the best possible start to her career, and she would make good on her pop star promise with sterling solo single proper Bad Boys the next year.

Eagle-eyed viewers will notice this is the second appearence by Unchained Melody here - given it was also a best-selling hit of the 90s by duo Robson & Jerome.

Here it was re-twizzled for Pop Idol winner up Gareth Gates, where it would have been his winner's single. He may not have scooped the crown, but he did release Unchained Melody as his debut single - it would be the first of four UK chart-toppers for the hair gel afficionado.

The UK really, truly loves a charity single. For Children In Need 2005 comedian Peter Kay joined forces with crooner Tony Christie for a re-record of his most famous single.

(Is This The Way To) Amarillo came complete with a star-studded music video, and the song even managed to out-peak its original 1971 result of Number 18 and becoming Christie's first UK chart-topper, at the age of 61.

Nashville rockband Kings of Leon seemed to explode out of nowhere in the late 00s with two singles that seemed to be everywhere; Sex on Fire and Use Somebody.

Although the set-up of It Wasn't Me may be morally dubious (with Shaggy acting as advisor on telling his friend how to deny that he cheated on his girlfriend, which he definitely did), although the song does admit that Shaggy's plea to deny, deny, deny makes no sense at all.

Apparently It Wasn't Me was never originally intended to be released as a single, but its success speaks for itself - becoming the third of Shaggy's four (!) UK Number 1 singles.

Black Eyed Peas had been around for a while by 2009, but their output around this time with seminal album The E.N.D turned them from a pop adjacent hip-hop quarter to a full-blown supergroup.

With lead single Boom Boom Pow given a harder edge, it was the David Guetta-produced I Gotta Feeling that gave the Pea's the defining hit of their career, and what quickly became a soundtrack to every night out, whether you liked it or not.

It's hard to overstate the change that occurred at the start of the 21st century with the arrival of talent shows like Popstars and Pop Idol. While Popstars' big success, Hear'say, had fractured quite quickly despite massive success, British reality TV found its first true superstar in Pop Idol's inaugural winner, Will Young.

A double A-side comprised of original cut Anything Is Possible and Will's winners single Evergreen (a cover of a Westlife album track) shot straight in at Number 1 on the Official Singles Chart, staying a the top for three consecutive weeks. It was the biggest-selling single of the 21st century, until it was overtaken by Pharrell's Happy in 2015.

The Official Top 10 best-selling singles from the 2000s