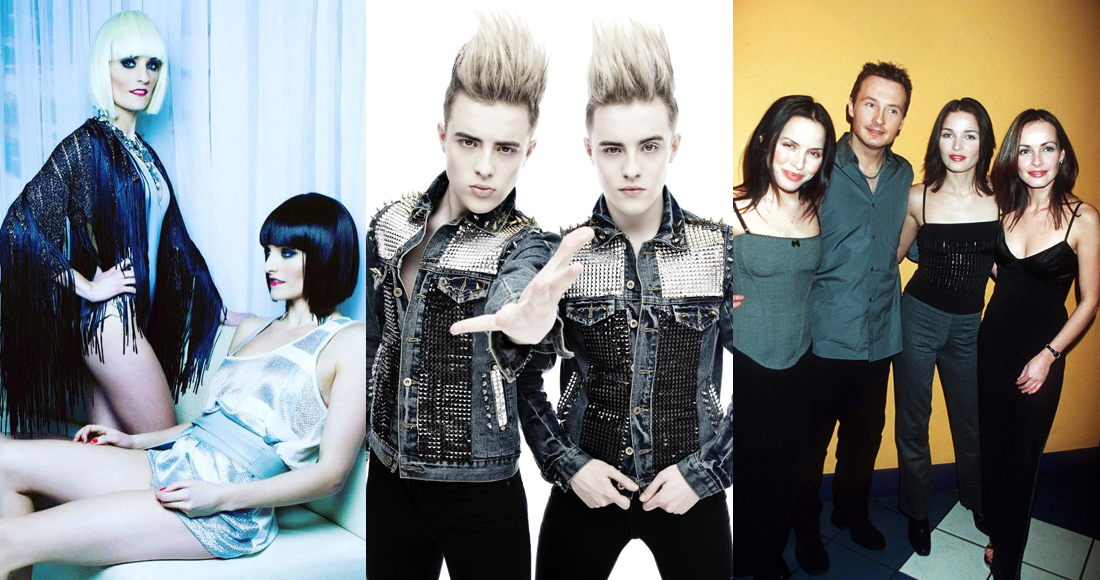 April 10 is National Siblings Day, a day to share with your nearest and dearest brothers and sisters. For many of us, siblings are the only enemy we can’t live without, while for others it can result in fame, fortune and massive chart success.

To celebrate, we look at some of Ireland’s most successful sibling partnerships in the charts…

John and Edward Grimes (“And together we are… Jedward!”) found fame on The X Factor UK in 2009, where they finished sixth and made headlines weekly for their bonkers performances – including renditions of Ricky Martin’s She Bangs, Ghostbusters and Ice Ice Baby. Chart success arrived swiftly, scoring three consecutive Number 1 albums on the Irish Chart between 2010 – 2012 and a trio of chart-topping singles. Jedward have also twice represented Ireland at the Eurovision Song Contest, placing eighth with Lipstick in 2011 and 19th with Waterline the year after.

Their twin power also extends far beyond music: the pair have modelled for Esquire and Grazia, competed in Celebrity Big Brother, headlined various charity campaigns and appeared in the infamous Sharknado film series.

Irish quartet The Corrs began as a duo in the late-1980s, with older members Jim and Sharon performing at local pubs while Caroline and Andrea were still at school. By 1991 all siblings were present and correct, and success was a slow burn until their 1997 album Talk On Corners took off worldwide thanks to its radio friendly, Irish folk-lite singles including What Can I Do, Dreams, So Young and Runaway. The band have notched up an impressive six Number 1 albums and 14 Top 50 singles in Ireland, their highest charting track being Breathless in 2000.

The Dublin-born Nolans spent ten years performing as a family band in 1963 before the sisters broke away in 1974 to form a new group. Though they were variety show favourites, appearing on national shows including The Two Ronnies and The Morecombe and Wise Show, chart success didn’t arrive until 1979.

Jumping on the popular disco sound of the time, Maureen, Anne, Bernie, Linda, Denise and Coleen (from 1980) scored a hit with I’m In The Mood for Dancing, peaking at Number 2 on the Irish Chart. The track was also a huge success in Japan, where it ranks among the countries all-time Top 10 best-selling singles by Western acts. And the sibling love is still strong: 45 years later, the sisters are still performing across the UK.

Twin sisters Edele and Keavy Lynch made up half of the Irish girl group, who enjoyed global success in the late 1990s. Their fellow sibling Shane also had huge pop success as a member of Boyzone.

The group’s debut single C’est la Vie topped the charts in the UK and Ireland and reached Number 9 on America’s Billboard Hot 100. They scored a further seven Top 50 singles in Ireland before splitting in 2002. Nine years later, Edele and Keavy formed synth-pop duo Barbarellas and released their first and only album Night Mode, trailed by single Body Rock, in 2011.

The Frank and Walters

The ‘90s alt-rock band, founded by brothers Paul and Niall Linehan, plus drummer Ashley Keating, landed a Top 5 hit in 1993 with indie-pop track After All. Niall left the band in 2004, but Paul continue to release music and tour. In March 2018, a cover of After All featured on TV series The Young Offenders and sent the original back into the chart at Number 66, with week-on-week sales up 954%.