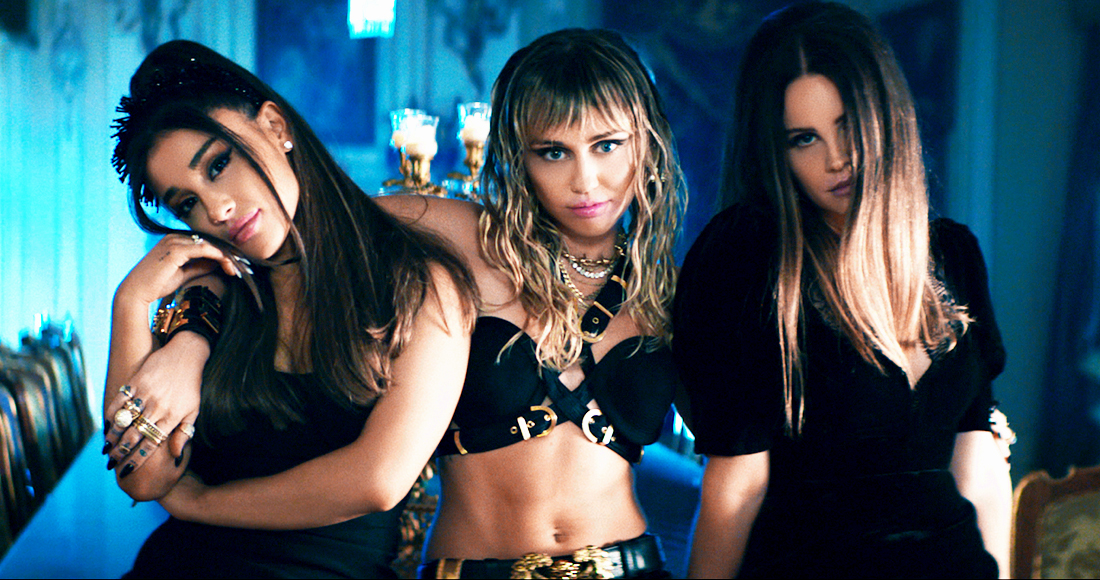 It's not uncommon for hits in the Top 40 to include more than one artist – the feature is becoming a regular… well, feature. Also growing in popularity are group collaborations, with sometimes four or more stars teaming up on a track.

But what about when these collaborations go mega? The soundtrack from the forthcoming Charlie's Angels reboot features an A-list trio of Miley Cyrus, Lana Del Rey, and Ariana Grande performing Don't Call Me Angel.

We look at other creative threeways – or more! – that have made an impression. Remember, two's company, three's a smash.

Calvin Harris has a long rich history of collaborating with other artists, and some of his biggest hits have included a featured vocal – including one million-seller in the shape of We Found Love with Rihanna. But with Feels, he supersized, enlisting Katy Perry, Pharrell, and Big Sean. He was right to open up the party – Feels hit the top in 2017, Calvin's first Number 1 in three years, and it's done over 100 million streams.

While the backlash against Blurred Lines was swift, it was a massive hit for a time in 2013, taking just eight weeks to reach a million pure sales, and at first looked set to launch Robin into the higher reaches of stardom. Only Pharrell seems to have walked away unscathed, and Blurred Lines was one of three million-sellers he managed to chalk up in the space of a year.

The aptly named Bang Bang was Ariana Grande's second Number 1 of 2014, and her first ever hit with Nicki Minaj, a partnership the pair would revisit for three further singles. What makes this collaboration mega, however, is the appearance of Jessie J, whose opening verse sets the tone (everyone on full blast). Bang Bang has amassed 1.42 million chart sales. Jessie scored her third and most recent Number 1 with this one, and while she was certainly the biggest name in the song at the time (in the UK, at least), she's only scored one Top 40 since. Maybe another team-up with Ari and Nicki can fix that?

DJ Khaled and everybody

American producer DJ Khaled must love a crowded studio – he's notorious for a high personnel count on most of his hits. Four acts at once is pretty much his standard. He's had most success with his dream team of Justin Bieber, Quavo, and Chance the Rapper, first scoring a Number 1 with them on I'm The One, in 2017 – which also featured Lil Wayne, let's not forget – and then a Number 3 hit with No Brainer the following year.

Huge Hollywood movies help make unexpected collaborations happen, and although Moulin Rouge had its racy moments, few could've seen this one coming. Christina, debuting the raunchy makeover that would make headlines over the next couple of years, Pink, Mya and Lil Kim really turned up the heat in this modern take on the LaBelle classic. A very different cover from the All Saints version which had also topped the charts two years earlier, for many this Lady Marmalade has become the definitive take. Just to up the personnel another notch, the spoken parts at the beginning and end come from producer Missy Elliott.

Rihanna has spent a good part of her career lending her vocal talents to other songs, Kanye's included – more on that later – so it was only right she bring out the big guns when she was between album campaigns in 2015. FourFive Seconds, the result of her team-up with Kanye and Beatles legend Paul McCartney was a very unexpected, low-key late-night jam style track that, despite being much harder to dancer to than any previous Rihanna track, peaked at Number 3 and spent 11 weeks in the Top 10. 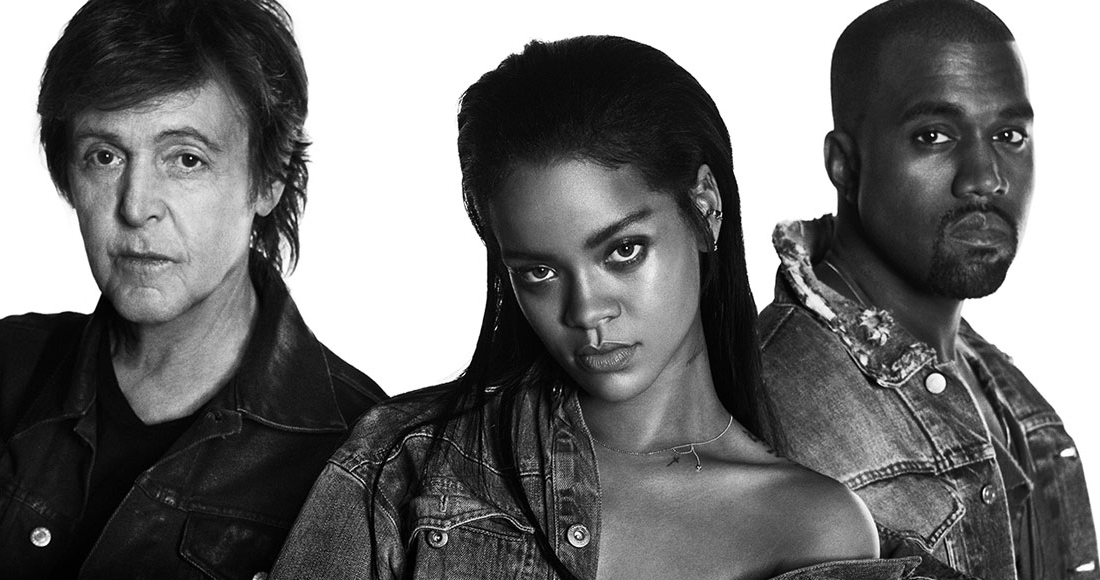 A collaboration that seemed to come from nowhere, Runnin' (Lose It All) took an established megastar, a popular producer, and a relative unknown and created pure magic. This unlikely trio scored one of the surprise hits of the summer in 2015.

Incredible, really, that Jay-Z had to wait until 2009 – 12 years after his first hit – before he scored a Number 1 as the lead artist (he'd already had two as a credited featured artist). On Run This Town he enlisted Kanye and Rihanna to give the track even more hit potential and, well, they delivered. Three really is the magic number: three artists, and a third Number 1 for all of them individually.

Timbaland had been a serious presence in R&B since the nineties thanks to his groundbreaking production duties for artists including Aaliyah and Missy Elliott. By the mid-noughties, however, Timbaland was taking centre-stage and he upped things a gear with the brilliantly acidic Give It To Me, in which Tim and his mates Nelly Furtado and Justin Timberlake – two more artists to benefit from his production skills – roundly dismissed anyone who tried to steal their share of the dance floor. The first of two chart-toppers for Timbaland in 2007.

One way to get a set of big names together is do it for charity, and on first glance Cher, Chrissie, Neneh, and Eric might not seem like the most obvious lineup. Love Can Build a Bridge was recorded for the Comic Relief single in 1995 – breaking tradition from the usual slapstick collaboration between a singer and a comedian, although we're sure Cher knows some fabulously filthy jokes – and was a Number 1. Interestingly, it's the only solo chart-topper for Chrissie, Neneh, and Eric – it was Cher's second.

After Queen frontman Freddie Mercury died in late 1991, a benefit concert was hastily arranged and held in April 1992 at Wembley Stadium. A host of acts performed with the remaining members of the band, and one of the highlights was a cover of the ballad These Are the Days of Our Lives, with George Michael and Lisa Stansfield. George liked it so much, he put it on his Five Live EP, which spent three weeks at Number 1 in May 1993.

What's your favourite mega collab? Let us know in the comments.