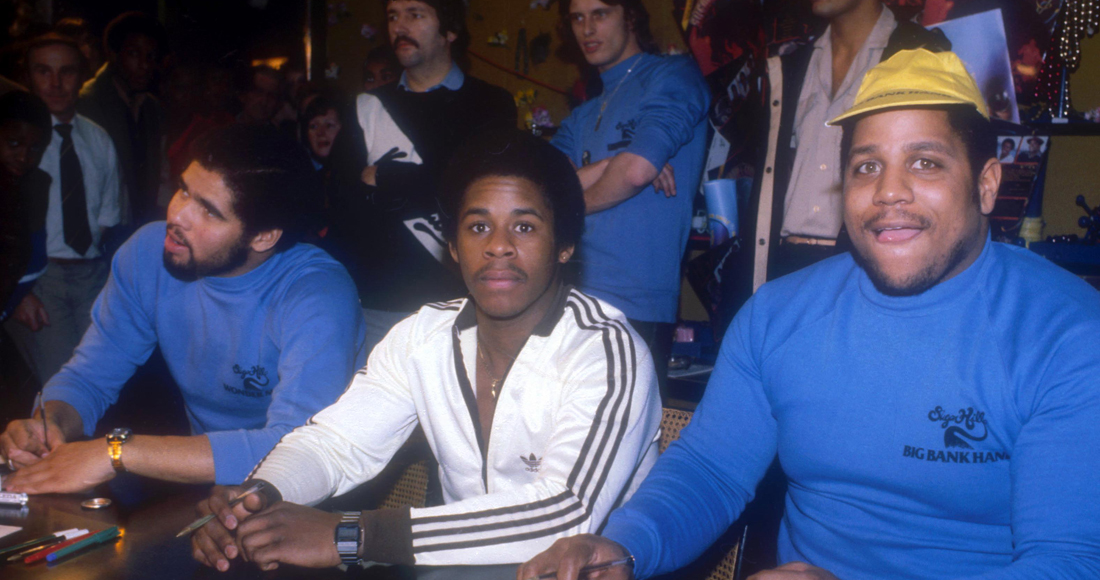 Can it really be 40 years since the first rap hit? Yes – it was December 1 1979 when Rapper’s Delight by the Sugarhill Gang entered the Official Chart at Number 38. It was the first time that any rap record had made the Top 40 charts anywhere in the world, and when it peaked at Number 3 two weeks later it became the first of countless Top 10 rap hits around the globe.

Looking back now it seems hard to believe that at the time the vast majority of the record buying public, and indeed the music industry, thought that the record was simply a one-off novelty hit and that rap would be a five-minute wonder.

The late seventies were a time when many American R&B dance records initially charted in the UK thanks solely to heavy club play, with radio only 'discovering' the track when it was already climbing the charts. Rapper’s Delight was one such record. It came into the UK as a 12" import on the newly launched, New Jersey-based Sugarhill label.

At first it was only played by a handful of musically adventurous club DJs, including Graham Canter at Mayfair’s influential Gulliver’s Club – arguably the first UK DJ to really get behind rap. News of its success on these trendsetting dance floors spread and before you could say 'Joe Robinson' (he was the Sugarhill supremo) it was the hottest import on the scene, even though it was a staggering 14 minutes 35 seconds long. This, understandably, resulted in a fierce battle between UK record labels for the rights to Rapper’s Delight.  The winners were Pye Records’ R&B Division, which was fronted by the now Official Charts consultant and music book writer Dave McAleer, whose team was completed by fellow charts consultant Graham Betts and then-up and coming dance music promotion man Morgan Khan.

To celebrate 40 years since the first rap entry on the Official Chart, we asked Dave McAleer to share some thoughts from this important moment in music history.

"Rather than give you yet another history of rap lecture or a Sugarhill Gang biography, I thought you might like to hear the untold tale behind the release of this ground breaking record. We (the R&B Division) were convinced that Rapper’s Delight would be a major hit and decided that we must have the record at any cost. We therefore needed to come up with a more attractive proposition than the other companies. To seal the deal we convinced Pye to not only give Sugarhill their own label in the UK (as a sweetener) but to pay them then exorbitant royalty of 16% – the highest Pye had ever paid anyone at that time.

"Added to this, and to clearly show them we were interested in their complete catalogue and not just this single, I went to New Jersey with my assistant Morgan to meet the people, musicians and artists who made up the Sugarhill family and, incidentally, during our stay we sat in on the debut session by the first female rap recording act, Sequence.

"One problem that had to be solved before Rapper’s Delight could be released in the UK was the length of the track. Even the short US 6m30s version was too long for UK radio, so Morgan Khan and I edited it down again to 3m58s, which was just about acceptable for radio. On the subject of length, Graham Betts remembers spending many hours listening to the full length track and writing down the complete lyrics in order to convince magazines like Smash Hits and No.1 to print them in the magazines, which would give us another route to pop record buyers, who might otherwise have been unaware of the record.

MORE: The UK's Top 100 biggest hip-hop songs of all time

"I guess the Pye R&B Division could also claim to have helped set up the first ever UK live rap show/tour when we were involved with bringing the Sugarhill Gang over in early 1980. Personally, I recall chatting to the trio backstage at the Royalty in Southgate on their live UK debut and noting that they did not seem particularly nervous performing their first, and indeed rap music’s first, live show outside of the US.

"I do remember being a little concerned about how a British audience would respond to an act that talked (rather than sang) over a dance beat. It's worth noting that at that time, people wanted and expected singing on their records, not talking - was the accepted theory. I needn’t have worried though, as the rap trio were well received. However, to be perfectly honest, I don’t recall it as being a, 'I have just seen the future of R&B & Pop music' moment.

"Looking back on the Sugarhill Gang and their revolutionary “new” rap sound, I am very pleased that I was lucky enough to have witnessed, and perhaps even played a very small part in, one of those rare moments in music when major changes actually do take place. In hindsight, the last month of the 1970s could perhaps be considered the first time that R&B music really came directly from the streets, and when the performers involved dressed like and appeared to be just like average regular guys. These early rappers performed their self-penned lyrics  - which came straight from their own real life experiences - with a minimal amount of pretentiousness and annoying showbiz polish, which seemed like a much needed breath of fresh air at that time."

As well as Rapper's Delight, Pye’s R&B team were also behind the first ever UK rap record, Chip Shop Wrapping by Allen & Blewitt in 1980. It was produced by Graham Betts and was a parody of Rapper’s Delight. McAleer also released the first UK female rap record, Make Contact by Kute E.Q & The Wow Wow Krew (a British girl who was part of the New York Rap fraternity in the early 80s), which was released on his indie label, T-Mac, in 1986. Morgan Khan went on to form and run the most successful dance/Rap music compilation label, StreetSounds.

Since those early days, as we all now know, rap and its offshoots have always been a major part of the global music scene. In 2019, UK rap has well and truly established itself as a cultural force, dominating the Official Singles Chart including a week earlier this month when over a third of the Top 40 was made up of British rap tracks. Heading into the 2020s, and with rap's popularity is still on the rise, it’s interesting to speculate where the genre will head next into its  half-century in 2029.