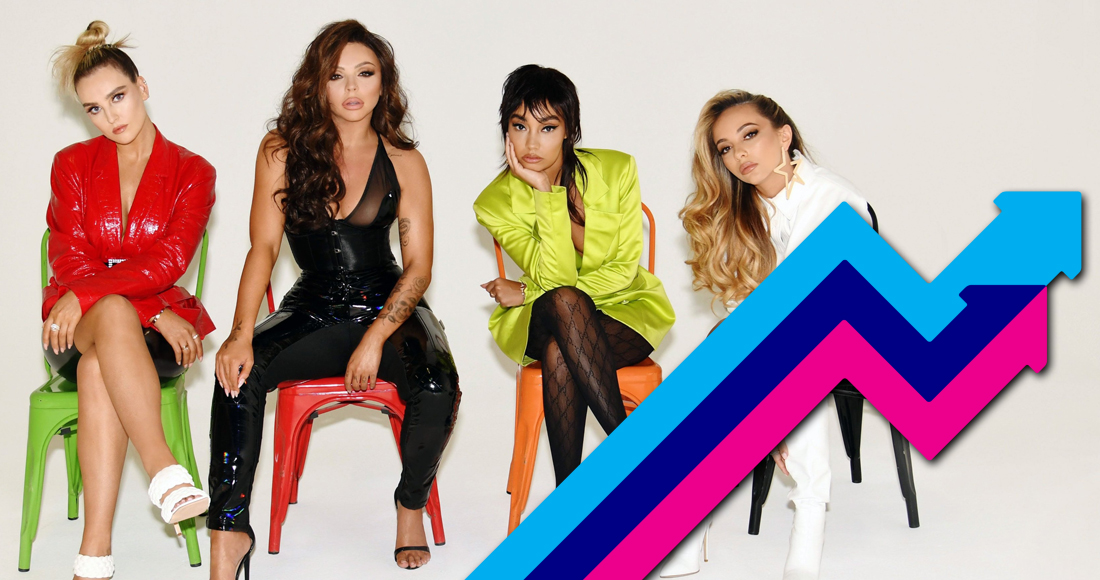 Little Mix are back in a big way this week as their new single Break Up Song lands at Number 1 on the UK's Official Trending Chart.

The nostalgic, empoweing, '80s-inspired track is heading for a Top 10 debut on the Official Singles Chart, currently at Number 6 in the latest sales flash. It's the band’s first (non-festive) release since last summer’s Bounce Back, which peaked at Number 10. See where all of Little Mix's singles and albums have charted here.

“It’s one of those songs that just makes you feel really good." Little Mix's Jesy Nelson recently told OfficialCharts.com. "Obviously, I didn’t live through the ‘80s but when I listen to it I feel like it takes me back somewhere.” Read the full interview here.

Dua Lipa’s latest single Break My Heart is close behind the Little Mix ladies following the early release of her second album Future Nostalgia. Armed with another dynamic music video, Dua is aiming for her ninth UK Top 10 hit on this week's Official Singles Chart.

Rihanna is finally back in our ears for the first time since 2017, joining Canadian singer and rapper PartyNextDoor on his latest single Believe It. It’s on track to become her 49th UK Top 40 this week.

Skepta, Chip and Young Adz land two singles in this week’s chart following the release of their new collaborative album Insomnia. Tracks Waze and Mains are both heading for this week's singles Top 40.

A total of eleven brand-new songs feature in this week's Official Trending Chart Top 20, including new entries for KSI, Lil Pump and Smokepurpp with Poppin, Kygo, Zara Larsson and Tyga with Like It Is, and Wildflower by 5 Seconds of Summer.