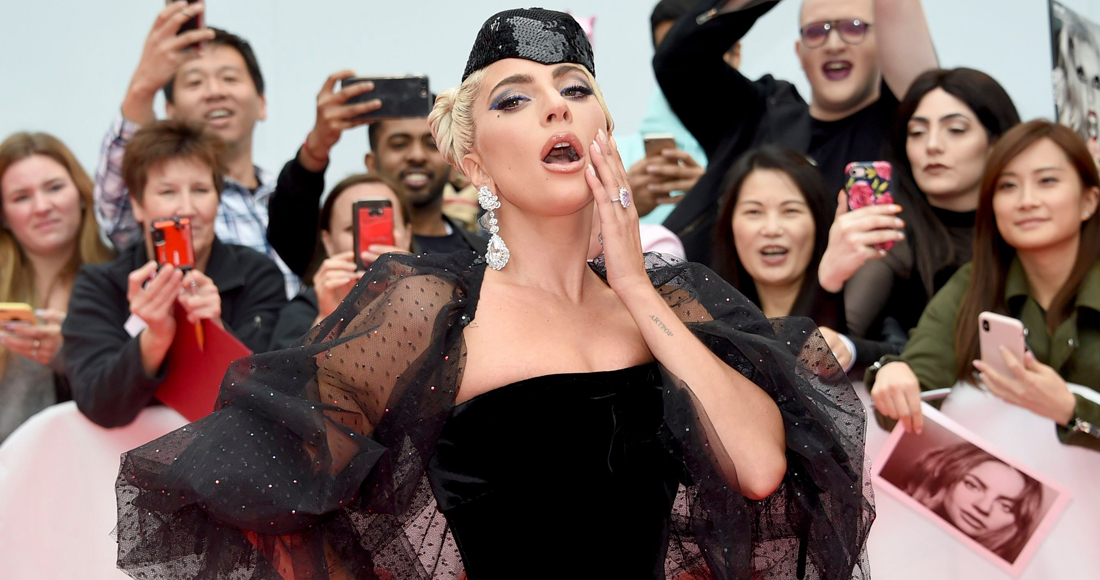 Huge congratulations to Lady Gaga and Bradley Cooper, who score the Official Chart double – ruling both the Official Albums Chart AND Official Singles Chart this week.

Lady Gaga lands her first Number 1 single for over eight years with Shallow, the duet with her A Star Is Born co-star Bradley Cooper, while the pair's soundtrack to the hit movie returns to the top spot, deposing Jess Glynne to notch up its second week at Number 1 on the albums' rundown.

It's actually the THIRD time Lady Gaga has grabbed the double. She first did it in 2009 with Poker Face and debut album The Fame, before doing it again in 2010 when Telephone, featuring Beyoncé went to Number 1 – her most recent chart-topper. See all Lady Gaga's UK chart history

Shallow is Lady Gaga's fifth Number 1 on the Official Singles Chart, and a first for Bradley Cooper. Bradley is the first Hollywood actor to achieve a Number 1 single since Nicole Kidman teamed up with Robbie Williams for the 2001 Christmas Number 1 Somethin’ Stupid.

Shallow cleared its nearest rival – Promises, last week's Number 1 from Calvin Harris and Sam Smith – by just over 1,200 combined sales. Two further A Star Is Born cuts are also in the Top 40 – Always Remember Us This Way climbs to 25, and I'll Never Love Again rises to 27.

Elsewhere on the Official Singles Chart, there are five new entries, the highest being Post Malone's Sunflower featuring Swae Lee; taken from the new Spider-Man: Into The Spider-Verse film, at Number 7, it gives Malone a fifth Top 10 in the UK.

Kodak Black, Travis Scott and Offset break the Top 10 with their collaboration Zeze rising three slots to 8, and Zara Larsson lands an eighth Top 40 with Ruin My Life (31), while south London collective D-Block Europe, Young Ads, Lil Pino and Dirtbike LB are new at 35 with Nassty.

Blackpink become the first female K-pop act to score a UK Top 40, thanks to their collaboration with Dua Lipa, Kiss and Make Up, new at 36, and X Factor 2017 winners Rak-Su land their second – I Want You To Freak climbs 22 slots to 39.

Over on the Official Albums Chart, Richard Ashcroft is the highest of 12 new entries, going straight in at 4 with fifth solo album Natural Rebel, while the soundtrack to Freddie Mercury biopic Bohemian Rhapsody becomes Queen's 24th UK Top 5 album, starting at 5.

Rock band Disturbed land a third UK Top 10 with Evolution at 7; the repack of Dua Lipa's debut, named The Complete Edition boosts 47 places to Number 9; and The Overtones self-titled album is in at 11.

Michigan rockers Greta Van Fleet start at 12 with Anthem of the Peaceful Army, American singer Khalid's EP Suncity is in at 20, and French artist Christine and the Queens bounds 21 slots to Number 21 with second album Chris, following an electrifying performance on The Graham Norton Show.,

Future and Juice WRLD’s collaborative mixtape Wlrd On Drugs begins at 23; Queen's The Platinum Collection zooms 56 places to 34; Welsh opera singer Bryn Terfel goes in at 38 with Dreams and Songs; and R.E.M. round off this week's new entries with their At The BBC live collection, at 40.