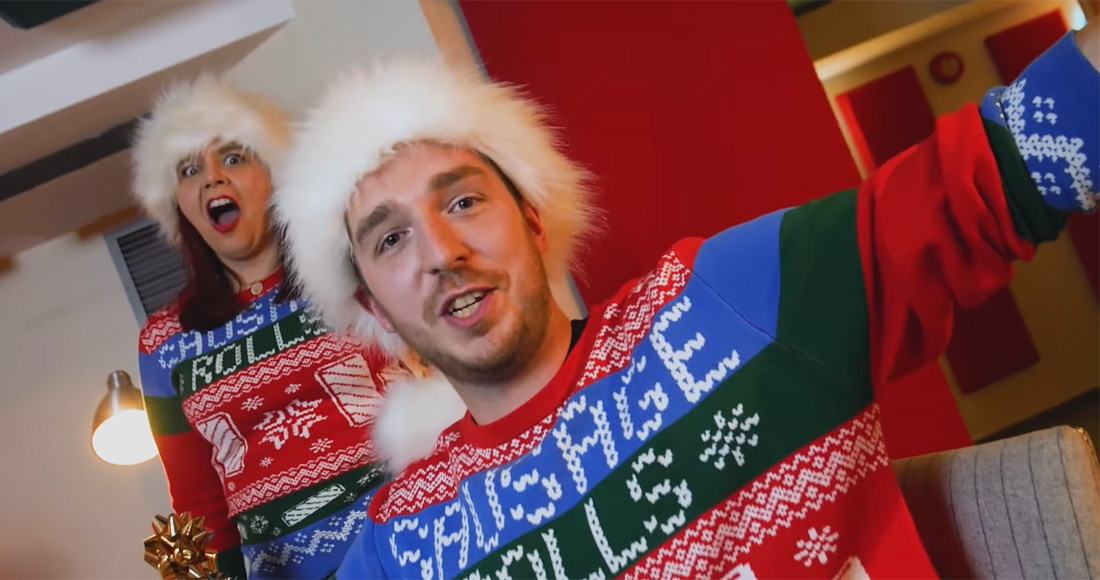 Since 2018, LadBaby has dominated the battle for the Official Christmas Number 1, all in the name of charity - and sausage rolls.

YouTuber Mark Hoyle, his wife Roxanne and their two children launched their first bid for the festive top spot in 2018 with a sausage roll-themed rework of We Built This City.

A rework of Ed Sheeran and Elton's current chart leader Merry Christmas, and featuring the music superstars themselves, surely he's feeling confident about his chances of chart glory once again? We phoned him up to find out...

Here we are again! Did you ever think you'd be back for a fourth and potentially record-breaking Christmas Number 1 campaign?

"It’s amazing we’ve been supported for four times now – the great British public have backed us this many times. I still pinch myself – I still can’t believe we got one, let alone going for a fourth.

With Ed Sheeran and Elton John on board, it's your biggest festive campaign yet. Would you have gone for it again regardless, with or without them?

"This summer me and Rox were doing some work for The Trussell Trust and they asked if we were going to do it again – we said, ‘Is there a way we can make it bigger and raise even more money?’ When Ed got in touch with us, he said he was doing a song with Elton, and asked if could we all join up together. It’s not every day you’re asked if you’re willing to do it with Ed and Elton!

"They sent us Merry Christmas in the middle of summer and we spent four weeks re-writing it. We went down to London and met with Ed, which was quite a nerve-racking moment. He's one of the best songwriters in the world, and we've written lyrics to his song that are silly and sausage roll-ey, but he loved it. He changed a couple of lines - and I’ll never forget we were in a hotel room together and he goes to me, ‘That’s great, shall we sing it through now?’ I was like, ‘Err…. Obviously I will, but my voice is really made for a football terrace’."

We need to know - what lines were changed at the last minute?

“The line that Ed suggested that I thought was brilliant was: "We came back with sausage rolls, just like you know we would - doesn’t my mate look good?” Those lines were his idea, and now it’s my favourite bit because in the video it’s so funny."

Ed is a superstar, but what do you say when meeting a music icon like Elton?

"We recorded the song and video in [Elton's studio] Rocket. What was quite lovely from our point of view is that this was the last song ever recorded at Rocket before they moved offices. The office that has recorded so many wonderful Elton albums, and the last song it saw was about sausage rolls.

"We bought some sausage rolls to the studio for the video, I gave one to Rox, and Elton was like, ‘Come on, where’s mine?’ I was nervous to even offer him one, but he ate the whole thing, despite saying he hadn’t eaten one in years.

"It’s been incredible working with both of them and to have them so involved. You never know with stars at that level if they’re just going to put their name to it, but they’ve been so invested – Ed has sent me voice notes probably every day for the past two weeks."

You've had a strong start on the Official Christmas Number 1 race; are you feeling positive about this?

“I never feel positive about it until it’s over – I just can’t start to believe because the pain of believing and then having it taken away is almost worse. This week we’ll keep going until the last moment and assume it might not happen. You never know with impending restrictions potentially coming into play from the government, and the constant discontent with Boris Johnson – there’s definitely a third song in the running should the guidelines change."

"Definitely – it takes a certain sort of person to download a song with that in the title, but you never know. There’s definitely an element that people aren’t happy with this government, but our song is for charity - I don’t believe theirs is - and ours is trying to raise more money than ever for food banks. It’s something that is even more important given everything that is going on.

You recently addressed the backlash you sometimes face around going for the Christmas Number 1; is it particularly biting given the whole family is involved?

“I think what’s lovely about our channels and audience in general is that we feel comfortable to talk about the positive and the negative. We’re positive 99% of the year and we try to make people laugh, that’s what our ethos is, but we’re not frightened to talk about things that are negative.

"It’s one thing when you get idiots sitting behind a keyboard on Twitter – we’re used to ignoring them – it’s more when the actual media choose to have a bit of moan because people read articles and take them as fact. It’s important to remind people this is for a cause that couldn’t be more important.

"Every year we say this will be the last time, but we keep coming back because the situation keeps getting worse. 7,000 food parcels are handed out every day this Christmas – that shouldn’t be happening in the UK."

Four years in, how has the whole LadBaby concept changed you and your family?

“It’s changed our lives completely. Personally, when we released our first song, I was working full time as a graphic designer. The first single was really difficult to promote because I could only do interviews and promo during a work break. Now we do LadBaby full time, we so lucky we’re in a position where it now supports us as a family. Our eldest Phoenix is five now, and some of his vocals are in the middle of this song so one day we can tell him he sung with Ed Sheeran.

If you do decide to retire after this single, and if it reaches the top, you'll have a 100% record of four Number 1 singles and nothing else in your discography.

“It would be so incredible and bizarre. Another thing that makes me laugh is how far it drops the following the week, which may well have broken a record at some point as well. I think it’s brilliant – it’s great that people back it for one week for Christmas, and then it’s gone, Christmas is over, and then real music takes over again. I love that it’s silly, but also helps keep the foodbanks open – this is what it’s all about."