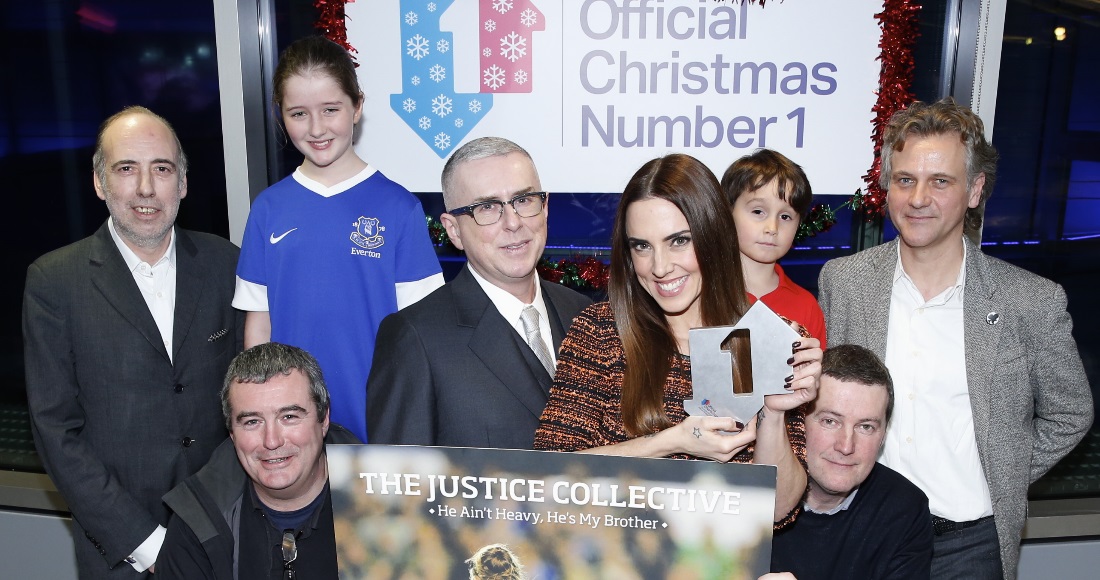 They’ve done it! The Justice Collective’s Hillsborough tribute single has made it all the way to the 2012 Christmas Number 1 2012, confirms the Official Charts Company.

The campaign has beaten off competition from X Factor winner James Arthur’s Impossible, racing across the finish line over 45,000 copies ahead of their rival. Last week’s chart topper Arthur has had another huge week of sales, shifting a further 224,000 copies in its second week to bring its tally to 713,000 since release.

He Ain’t Heavy... started the week trailing the X Factor winner by 3,000 copies. By Wednesday, December 19 The Justice Collective had overtaken James Arthur by 3,400, before extending their lead to 23,000 copies by Friday.

Most importantly, both Christmas Number 1 contenders have raised vital funds for their designated charities.

The all-star group, The Justice Collective, featuring a host of well known faces including Robbie Williams, Mel C, Rebecca Ferguson, Paloma Faith and Holly Johnson, are raising funds and awareness for the ongoing legal battle of the families of the Hillsborough tragedy.

Official Charts Company's Managing Director, Martin Talbot, says, “Congratulations to The Justice Collective on becoming the 2012 Official Christmas Number 1 with He Ain't Heavy, He's My Brother. They fought a sterling campaign against one of the biggest singles of the year in James Arthur's Impossible and are worthy winners - in aid of a very worthy cause.”

Steve Rotherham, MP Liverpool Walton, says "We have done in 9 weeks what it normally takes 9 months or more to achieve. Working with a phenomenally dedicated team all of whom have worked for free and displayed total professionalism throughout"

With He Ain't Heavy, He's My Brother going to Number 1, members of the all-star Justice Collective now account for 20% of all the Christmas Number 1 singles in chart history. That’s 12 out of the 61 singles that have topped the charts in Christmas week.

23 year old YouTube blogger and unsigned musician Alex Day scores his third chart hit with Stupid Stupid at Number 25, Alex debuted on the Official Singles Chart last Christmas, achieving a Top 10 hit with Forever Yours, without the backing of a record label.

The Eddie Stobart Truckers place just outside the Top 40 at Number 47 with The 12 Days Of Christmas, while Robbie Williams’ Different is at Number 64. Williams, who is part of The Justice Collective, had asked fans to buy the Hillsborough tribute instead of his single when he realised release dates would clash.

Minecraft Christmas, Area 11’s festive tribute to the cult video game, is at Number 69.  And finally, The Games Maker Choir and Alistair Griffin’s I Wish For You The World ends the week at Number 70,

Congratulations to all 2012 Christmas Number 1 contenders!

The Official Singles Chart Christmas Top 10 is as follows. See the full Top 100 here after 7pm.