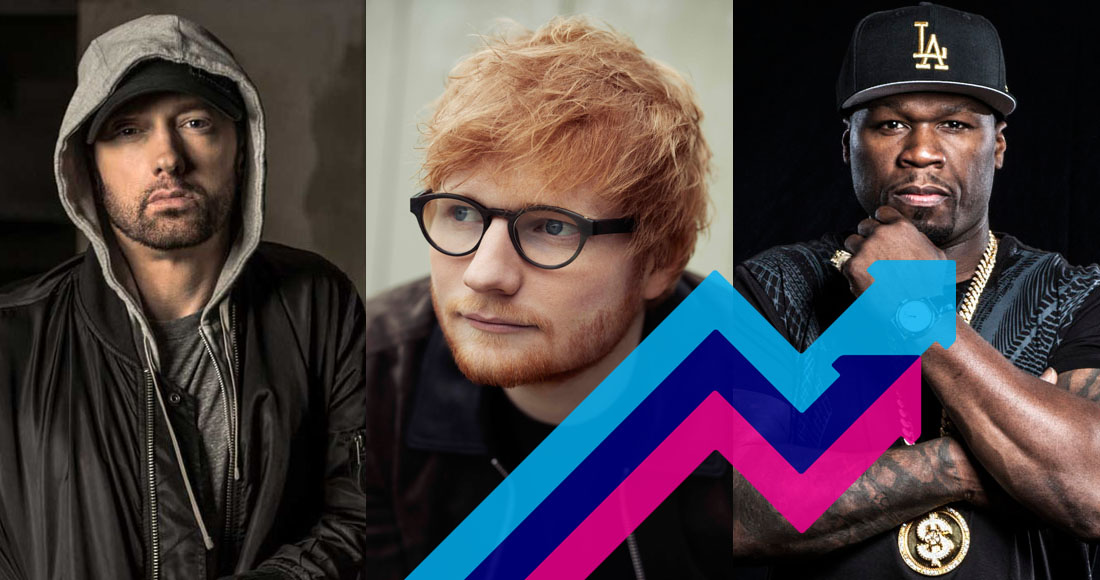 As Ed Sheeran's new record No.6 Collaborations Project heads for Number 1 on this week's Official Albums Chart, one song from the duets collection is proving particularly popular: Remember The Name ft. Eminem & 50 Cent lands at the top of the latest Official Trending Chart.

Though it’s the first time all three have worked together, Eminem has collaborated with both Ed and 50 Cent on separate occasions. Ed and Eminem joined forces on Number 1 single River in 2017, while Eminem and 50 have charted together three times already with You Don’t Know with Lloyd Banks (2007), Crack A Bottle with Dr Dre (2009), and My Life with Adam Levine (2013).

Ed also takes second place on this week's trending Top 20 with Take Me Back To London, which features old friend Stormzy. The singer-songwriter's stop-gap between his official albums is set for impressive opening week numbers,racking up 64,000 chart sales between Friday and Sunday.

Meanwhile, Kygo and Whitney Houston’s Higher Love continues to grow the UK, and Krept & Konan, Headie One and K-Trap are already making a big impact with their new track I Spy, which is looking likely to become K-Trap’s first Top 40 single this week.

Elsewhere, UK producer Remedee is off to a strong start with Love Of My Life ft. rappers Not3s & Young Adz. Tiesto, Jonas Blue and Rita Ora’s Ritual grows as it poises to claim its first week in the Official Singles Chart Top 40, and Craig David also makes a move towards the Top 40 with When You Know What Love Is.

Other brand-new tracks making waves this week include Harder by Jax Jones and Bebe Rexha, and Sorry by rising star DJ Joel Corry which vaults 43 places on the Top 100 so far this week.