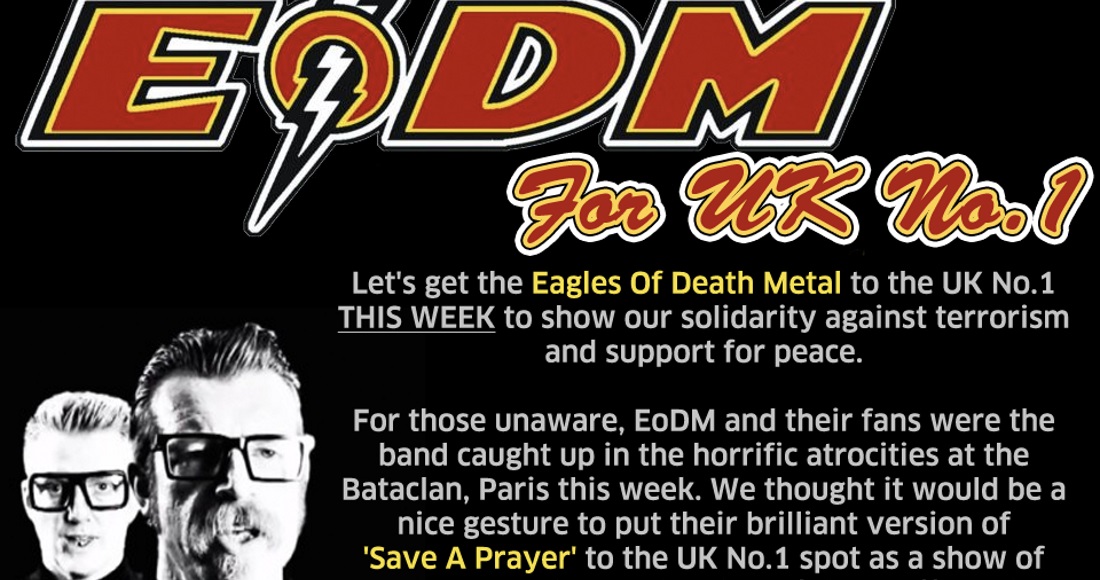 Eagles Of Death Metal's Save A Prayer could enter this week's Official Chart Top 40 as a fan-led campaign to get the song to Number 1 following the tragic Paris terror attacks grows.

The band's cover of the Duran Duran track has leaped a massive 52 places overnight and currently sits at Number 44 on today's sales flash (November 17). And with three days of sales left until this week's Official Chart is announced, it could climb even further.

Over 12,000 people have signed up to the campaign's Facebook page, which pays tribute to those who lost their lives in the attacks, some of the worst of which took place during the group's concert at music venue Le Bataclan. 87 civilians killed during the show, including the group’s merchandise seller, 36 year old Briton, Nick Alexander.

Duran Duran's Simon Le Bon has responded to the campaign, ensuring the band will donate all proceeds due to them for the song.

@EODMforNo1 @DuranDuran will donate all proceeds due to us, from this version. Considering options that are useful, peaceful & uniting.

MORE: See where all of Eagles of Death Metal's singles and albums have charted in the UK

Stay tuned to OfficialCharts.com, where we’ll be posting updates on the progress Eagles of Death Metal’s Save A Prayer throughout the week. The cut off for sales and streams for this week’s Official Chart is midnight on Thursday.

The Top 40 will be counted down on BBC Radio 1’s Official Chart with Greg James from 4pm Friday with the full Official Singles Chart Top 100 to be published Friday 5.45pm here.