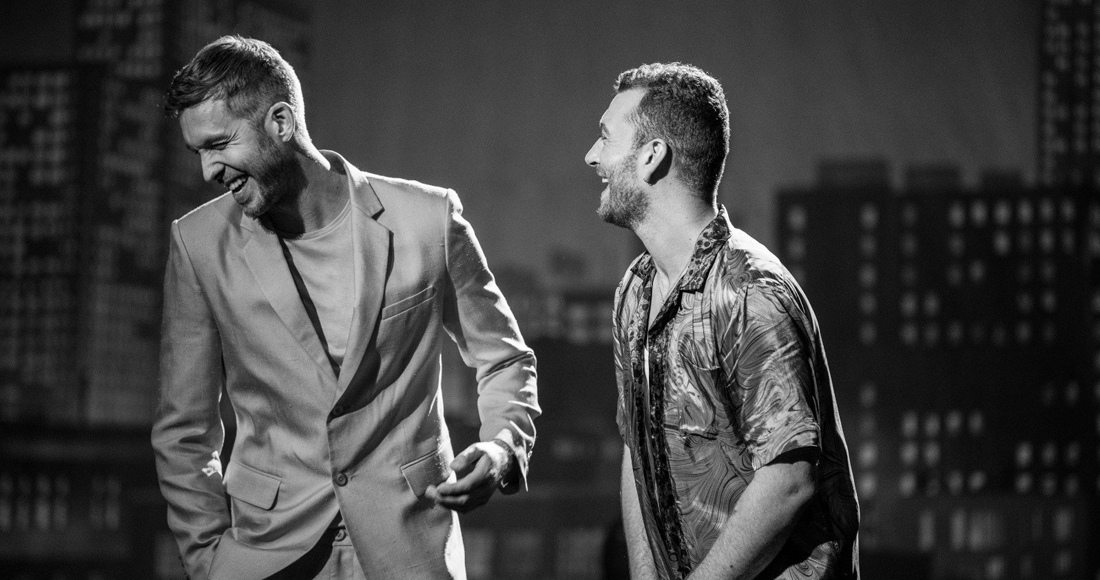 It's a fair bet Calvin Harris and Sam Smith will be a little happier than Marshmello and Bastille today – Calvin and Sam's collaboration Promises has seen off all challengers to remain at Number 1.

It's a fifth week at the top for Calvin and Sam, with a lead of 12,000 combined sales, but we can't write off helmet-wearing producer Marshmello – real name Christopher Comstock – just yet. Happier, his team-up with British band Bastille, edges up two places to Number 2, giving Marshmello a new UK personal best.

If Marshmello and Bastille make it next week, it will be a first chart-topper for both acts. Marshmello's previous peak was Number 3 last November, with Silence, featuring Khalid. Bastille peaked at Number 2 twice, back in 2013, with Pompeii and Of The Night.

Mark Ronson and Diplo's Silk City project has gone Top 5 with Electricity featuring Dua Lipa, rising three slots to 4, while Rita Ora claims her 13th Top 10 as Let You Love Me leaps eight places to 6. This means Rita Ora now holds the Official Chart record for the British female solo artist with the most Top 10 singles.

Freya Ridings leaps 11 to score her first Top 10 with Lost Without You at 9, and following his Strictly Come Dancing performance, George Ezra rebounds six with former Number 1 Shotgun, now at 10.

Australian singer-songwriter Dean Lewis is up seven slots to 11 with Be Alright, while Panic! at the Disco climb to 12 with High Hopes – their highest ever chart position in the UK.

Lady Gaga lands her 20th Top 40 hit with Shallow, a duet with Bradley Cooper, her co-star in A Star is Born, new at 13; while Sigala, Ella Eyre, Meghan Trainor and French Montana zoom 16 places to Number 17 with Just Got Paid; and Labrinth, Sia and Diplo's supergroup LSD break the Top 20 with Thunderclouds advancing five slots to 18.

US singer and songwriter Khalid leaps seven places to 24 with Better; while DJ Snake, Selena Gomez, Cardi B and Ozuna are new at 30 with Taki Taki; MK, Jonas Blue and Becky Hill break the Top 40, rising seven to 37; and Lizzy, Fredo, Young T and Bugsey are a re-entry at 39 with Ay Caramba.