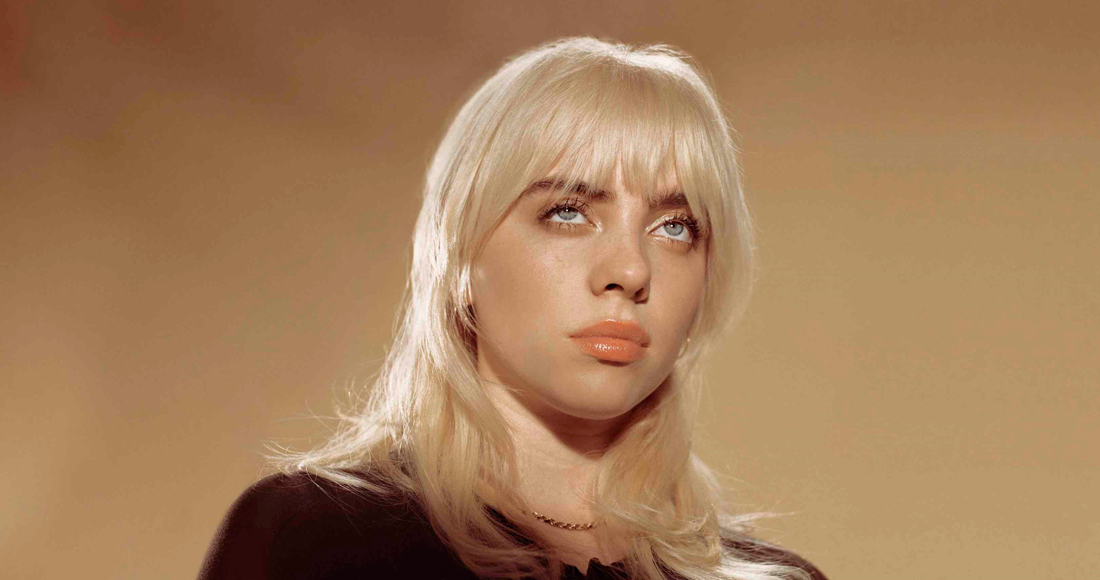 Billie Eilish has proved to be one of the most popular and influential pop artists of the modern era, mostly by being aggressively herself.

Emerging with bedroom pop inspired by the likes of Lana Del Rey, Billie's meteoric rise to fame was secured with the release of her darkly inventive debut album Where We All Fall Asleep, Where Do We Go?

Peaking at Number 1 on the Official Albums Chart and with chart sales in excess of 682,000 so far, the LP contained a raft of hit singles, including the Bury A Friend and Bad Guy.

A cut from Billie's debut EP Don't Smile At Me (which has amassed chart sales in excess of 432,000 to date), IDONTWANNABEYOUANYMORE is a melancholic R&B influenced single that was heavily inspired by Billie's own bouts of depression. A fan favourite from her early days, it's been streamed 68 million times by UK fans.

Bold and braggadocious, You Should See Me In A Crown's crashing synths play host to Billie's worryingly prophetic thoughts about climbing to the top. Originally released as the lead single from her debut album, the track has been streamed 68 million times in the UK and was also featured in a pivotal scene in popular teen drama Euphoria.

Easily the most obviously up-tempo and pop-influenced track Billie has released, there's a rollicking folk-pop inspired beat to Bellyache that carries a distinctly Latin influence. A highlight from EP Don't Smile At Me, Bellyache has been streamed 76 million times in the UK despite peaking at 79 on the Offical Singles Chart.

Billie became the youngest artist to sing the coveted James Bond theme song, taken from the upcoming film No Time To Die. Initially released last year before the film's cancellation due to the pandemic, the sweeping orchestral sounds of No Time To Die earned Billie her first UK Number 1 single. Streamed over 10 million times in its opening week (the biggest-ever opening for a Bond theme), it's amassed over 70 million streams so far too, despite it being just over a year old.

In many ways Billie's first big break on the UK charts, the sinister Bury A Friend unfolds like a nightmare; with lyrics about stapling tongues and burying the hatchet set to the percussive beats of glass being broken. A dark delight, it became her first-ever Top 10 single on the Official Singles Chart, peaking at Number 6 and has so far being streamed 113 million times.

A surprise release following the success of her debut, Everything I Wanted finds Billie in a decidedly contemplative mood about her career and her bond with brother Finneas, who co-writes and produces all her songs. Set to a downtempo electronica beat, Everything I Wanted reached a peak of Number 3 in the UK at the time - her third Top 10 entry - and has been streamed 123 million times.

A lo-fi and understated debut single for a future pop superstar, reminiscent in many ways to the strategy Lana Del Rey deployed to such great effect with Video Games, Ocean Eyes remains a glittering and intriguing entry into Billie's world. The lowest-charting song in the Top 5, only reaching Number 72 on the Official Singles Chart, its nonetheless been streamed 120 million times and amassed 1 million chart sales.

Billie, there's something in your eye. Carried by its eye-catching (sorry) music video, When The Party's Over is a bare-bones piano ballad, stripped of all the hip-hop beats and sinister sonic flourishes that would go on to define Billie's first album, it's been streamed 138 million times in the UK alone.

A collaboration with the equally ascendant Khalid, Lovely formed the lead single for the soundtrack of Netflix's 13 Reasons Why's second season. Billie's second-most-popular track in the UK overall, it's been streamed over 150 million times and has chart sales totalling 1.12 million.

The biggest hit from Billie's first album Where We All Fall Asleep, Where Do We Go?, Bad Guy already seems like a defining career moment for a pop star not yet out of her teenage years. Confident, cool and laced with a heavy dose of sarcasm, nothing about Bad Guy should be taken seriously...unless you count its chart data, of course. Duh!

By far Billie's biggest hit in the UK, Bad Guy has chart sales totalling over 2 million and is also her most-streamed song here, racking up a mammoth 275 million streams to date.