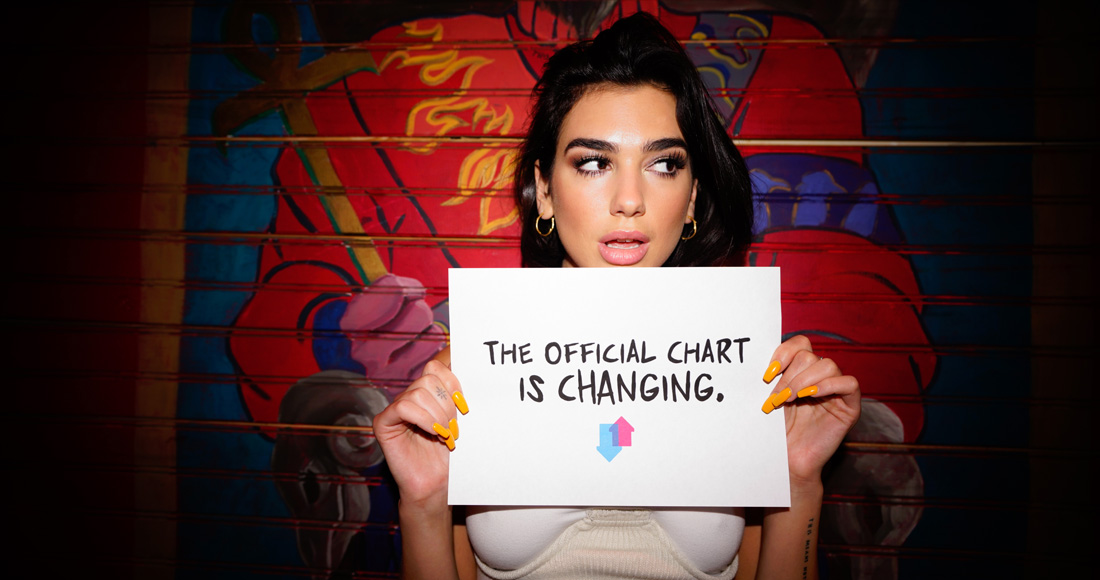 The UK’s Official Singles Chart enters a new era this summer, with video counting towards the weekly rundown for the first time, the Official Charts Company can confirm.

Streaming and downloading of videos and official audio clips from artists such as Dua Lipa, Drake, Arctic Monkeys and Ariana Grande will count towards the UK’s only official singles countdown, which is compiled by the Official Charts Company and unveiled by BBC Radio 1 every Friday afternoon. The change will be effective from the chart published on July 6.

The change comes as services such as Apple Music and Spotify add video to their platform and as YouTube launches their first subscription service in the UK.

While Ed Sheeran claimed the UK’s biggest music video of 2017 overall with Shape Of You, the iconic video for Dua Lipa’s New Rules nabs the title of most streamed video by a female artist, notching up 60 million UK streams.

"Can you believe it? I can’t!" Dua said of New Rules' success. "Thank you for all your love and support, it means the absolute world to me. The response to New Rules was so crazy and I am so grateful for it. Video was really important to me in my career - it’s another way as artists that we can get our music to our fans."

Talking at a Years & Years shoot in East London, Olly Alexander welcomed the introduction of video: “For artists like us it’s a great thing. Videos give us a chance to make a statement and it’s great if that is taken into account in the Official Singles Chart. When I think about our music I think about it visually too - it’s another opportunity to get our message across.”

The addition of video streams is designed to ensure the chart remains a showcase for hit music, however music fans choose to access it. The Official Singles Chart will continue to be the only official and most comprehensive countdown in the UK market, reflecting sales of downloads, CD and vinyl, as well as streams of audio or video tracks, whether on premium subscription or ad-funded services.

The services which will contribute video streams to the chart will include Apple Music, Spotify, YouTube Music and Tidal, who have all added video to their platform over the past year.

Official Charts Company chief executive, Martin Talbot, said: “This is a significant step for the UK and ensures The Official Chart continues to be the most comprehensive and trusted chart in the UK, bar none. Consumption of recorded music via more than 15,000 retailers, download stores and streaming services of all kinds contribute to the weekly chart countdown.

“In the modern era, artists are increasingly multi-faceted creators, with a highly developed visual sense running in parallel with their music. The addition of video ensures that the Official Singles Chart reflects the creativity of the artist in the broadest way possible – and music fans’ engagement with that vision.”

Official Charts Company non-executive chairman Derek Allen (svp commercial for Warner Music UK) added: "It’s always been important that the Official Charts keep pace with an ever evolving and dynamic market, while also retaining their integrity, something which has set the UK charts apart from many of those operating elsewhere around the world. These latest changes are just another step down that road.”

In a parallel change, free ad-funded streams will be weighted at a different rate in the UK’s Official Singles Chart compared to streams played under a paid-for subscription from the July 6 chart. 100 streams via a subscription service will equate to one sale, as will 600 “free” streams. This replaces the current combined conversion rate, which means all streams are treated equally – with one sale equivalent to 150 streams. This will apply to both video and audio streams equally.

The new rules will also apply to the Irish singles chart - read the full announcement here.

The change is being made during a period of great change in the international music market, with markets such as France and Germany choosing not to count ad-funded streams at all in their charts, while Billboard has also downrated ad-funded streams against their premium counterparts.

The Official Singles Chart is unveiled by Scott Mills on BBC Radio 1 from 4pm to 5.45pm every Friday afternoon. View the latest Top 100 here.