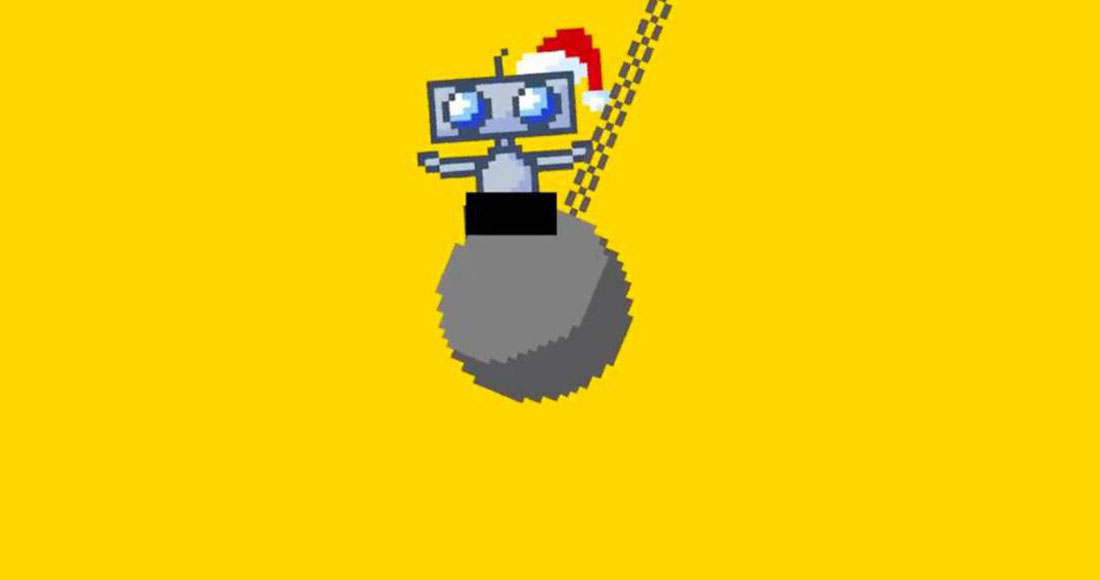 The Retrobot tells us why his new single, Christmas Robot, should be the Official 2013 Christmas Number 1.

With seven days to go before the 2013 Christmas Number 1 race officially kicks off, we chat to some of this year’s contenders to find out why they want to be this year’s festive chart topper.

Today, it’s the turn of The Retrobot, who’s hoping to be Number 1 this Christmas with his new single, Christmas Robot.

The Retrobot is a robot who ran out of power in the 1980s, and woke up a little confused earlier this year. He’s teamed up with producer Mike Stock (one third of the legendary production trio Stock Aitken Waterman AKA the folks who were behind Kylie Minogue, Jason Donovan and Rick Astley) for his bid to top the Official Singles Chart this Christmas.

“I’m The Retrobot – the brains and brawn behind this year’s Christmas smash, Christmas Robot. My batteries lost power in 1989, and I was bought from a car boot sale in 2013. New batteries… And here I am!”

How did your single, Christmas Robot, come about?

“All my memories are from the ‘80s. I’ve come back and I can see a lot has changed, some good, some bad. I think this song symbolises the eternal struggle between man and machine. I needed to write this song to highlight a world that, in some ways, has dehumanised people; they’re in danger of losing their ability to think, love and appreciate the true meaning of Christmas. This song is a watershed in philosophical thinking. And you can dance to it!”

Why should Christmas Robot be this year’s Christmas Number 1?

“Music is not about how well they can twerk or grind hammers… Now I’m not slamming Miley Cyprus [sic], she’s a very talented singer. I just want to show her, and the young guys out there making records in their bedrooms, that it is possible to have a hit single without getting naked.”

“I’m a believer that if you concentrate, and focus on what you’re doing, and what you’re good at, God will take care of the bigger picture. By which of course I mean Simon Cowell. So by God’s grace, I should be Number 1. Are you listening, Simon?”

Are you planning to use any dirty tactics?

“We should all recognise that while all you humans are feasting on turkey and stuff, and watching TV and drinking the latest wines, and playing with your Pid Pad Pods and computers, that robots across the whole world are doing the hard work for you. We’re keeping it all going. Have you ever thought what would happen if we went on strike? Bad things would happen. So I need to be Number 1 you guys because I’m not saying bad things will happen if I’m not Number 1, I’m saying maybe, maybe this Christmas bad things could happen.”

And what’s your favourite Christmas single of all-time and why?

“Especially For You by Kylie and Jason. I preferred it when people had a megabit more respect for themselves, and people liked the music for what it was. “

You can watch the music video for Christmas Robot below:

When does the Official 2013 Christmas Number 1 race start?

Whoever you’re backing in this year’s race, make sure you buy it between 00.01am on Sunday, December 15 and midnight on Saturday, December 21 for sales to count towards this year’s Official Christmas Singles Chart.

The Official Christmas Singles Chart Top 40 will be counted down on BBC Radio 1’s Official Chart Show with Scott Mills and Jameela Jamil between 4 and 7pm on Sunday, December 22, with the full Top 100 posted on www.officialcharts.com at 7pm.