Launched in 1956, the Official Albums Chart has provided a weekly snapshot of popularity to one of the most influential art forms of our time for more than 60 years.

The first ever chart, which was published in Record Mirror on 22 July 1956, saw Frank Sinatra’s Songs For Swingin’ Lovers landing in the coveted Number 1 slot. Now, over half a century of vinyl, cassette, CD and download-purchasing later, over 1,100 albums have hit the top spot in the UK. But which are the biggest of all time?

MORE: Look back at the best-selling album of every year since 1956

Topping the all time best sellers list is Queen’s 1981 Greatest Hits, and stands alone as the first and only album to have sold over 6 million copies in the UK (6.1 million sales to date). Queen’s Greatest Hits II also makes it into the Top 10 at Number 10 with almost 4 million albums sold.

"What a great bit of news to wake up to!" Brian May told Official Charts. "The most popular album? Well, I always thought the band showed promise, but this is beyond our boyhood dreams! Thanks folks!"

The retrospective has enjoyed another resurgence this year thanks to the Freddie Mercury biopic Bohemian Rhapsody. We caught up with Brian May back when the record passed 6 million - watch below:

Meanwhile, ABBA – Gold: Greatest Hits is the UK’s second biggest-selling album of all-time – 5.2 million units have been shifted since its release in 1992.

The best-selling studio album in Britain comes courtesy of The Beatles - Sgt. Pepper’s Lonely Hearts Club Band (3) is also the only other release in history to break the five million UK sales barrier (5.1 million). Look back at The Beatles' full Official Chart history here.

Adele’s 2011 phenomenon 21, featuring Someone Like You, remains unmoved at Number 4, while Oasis’ (What’s The Story) Morning Glory? rounds out the Top 5 approaching 4.7 million sales.

The rest of the Top 10 features two entries from Michael Jackson; Thriller and Bad sit at 6 and 9 respectively. Pink Floyd’s The Dark Side of the Moon (7) is the only record in the Top 10 that has never topped the weekly chart, peaking at Number 2 instead, while Dire Straits’ Brothers in Arms lands at Number 8.

With a total of four entries, Robbie Williams makes the most appearances of any individual within the Top 60, counting two of his solo releases (I’ve Been Expecting You at 48 and Swing When You’re Winning at 56) and two Take That best-sellers (Progress at 57 and Never Forget – The Ultimate Collection at 59). Robbie also scored the 1000th Number 1 album back in 2013 with Swings Both Ways.

Take That have a third inclusion on the long list with Beautiful World at Number 34, their first album without Robbie. Also with three entries on the list are Coldplay with their albums A Rush of Blood to the Head (31), X&Y (40) and Parachutes (45). Acts with two albums apiece in the Top 60 include Michael Jackson, Queen, The Beatles, Adele, Dido, ABBA, Paul Simon (including Simon & Garfunkel) and Fleetwood Mac.

While Adele’s 21 might be her personal best overall, her most recent offering 25 causes the biggest disruption to the all-time list, rocketing into the all-time Official Albums Chart Top 30 at Number 27.

25 broke a slew of chart records following its release back in November 2015 when it became the fastest-selling album of all time in the UK, beating Oasis’ Be Here Now to the highest ever first week sales as British shoppers snapped up a staggering 800,000 copies in its opening week.

Not content with stopping there, 25 smashed through the million sales threshold in just 10 days, setting a new land speed record for a million-selling album in Britain, the previous record being held by Oasis’ Be Here Now (17 days) also. It came as little surprise when Adele then went on to hurtle through the 2 million barrier by its 29th day on sale, overtaking title holders Robson & Jerome whose 1995 debut album took 42 days to cover the same ground.

In the time since the all-time Top 60 list was compiled, 25 has proven unstoppable by bulldozing through the 3 million units marker, receiving a 10x Platinum certification from the BPI.

Another notable modern entry is Ed Sheeran's second album X at Number 49. An impressive run of form over recent years has seen the Suffolk singer-songwriter notch up nearly 2.6 million sales of 2014 release X. X has spent 13 weeks at Number 1 on the Official Albums Chart and and incredible 250 weeks in the Top 100. 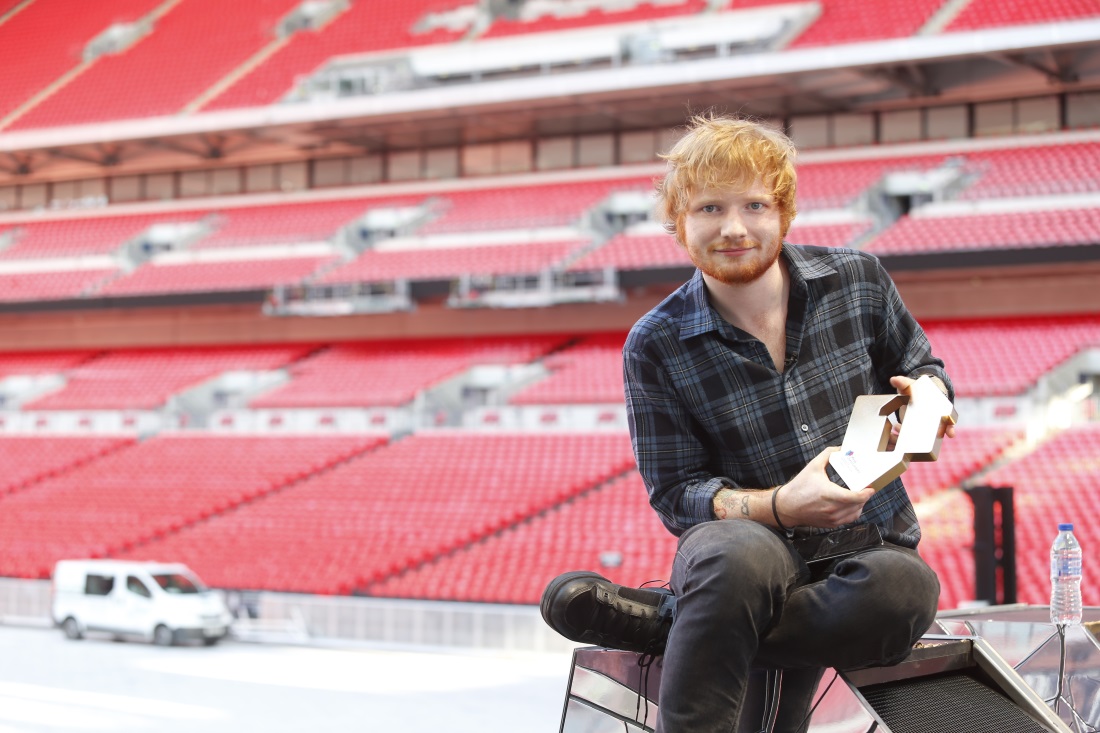 Ed was also the first recipient of the 24ct gold-plated Official Number 1 Album Award when the scheme launched one year ago this week. Ed was presented with the award on stage at Wembley Stadium in July 2015 where he made history by becoming the first solo performer to headline the legendary venue.

Commenting on this list, Official Charts chief executive Martin Talbot said: “In celebration of 60 years of the UK’s Official Album Chart, it is fantastic that we can crown Queen as the kings of the Anniversary Top 60. With seven albums by British acts in the all-time Top 10, and Adele’s 21 now challenging The Beatles’ Sgt Pepper to be the biggest selling studio album of all time, it is a great list for homegrown talent.

The best-selling albums of all time on the Official Chart

Look back through the UK's official biggest selling album of every year since 1956 below: