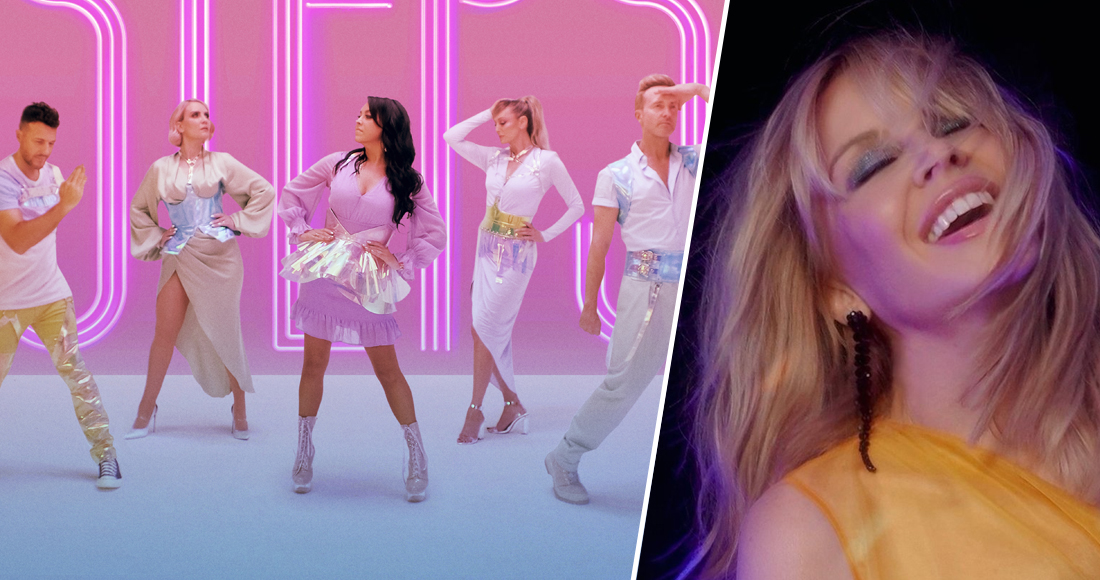 Ever since Steps signed a record deal with BMG last year to release their new album What The Future Holds, fans have been hoping to speak a collaboration with their labelmate Kylie Minogue into existence.

But is it just a pipe dream? The group have told OfficialCharts.com that “it would be silly not to” team up with the Australian star.

Steps, who have released their new track Something In Your Eyes today (Oct. 27), the second single from their new record, said they are big fans of Kylie's recent disco offerings including her single Say Something.

“I feel like we should [collaborate] because we share all the same team creatively, and I love Say Something as well, it’s really good”, H said, with Lee adding: “Why not? It would be silly not to.”

H recalled meeting Kylie backstage at the 1999 BRIT Awards, which culminated in a photo of the pair doing Steps' signature Tragedy pose.

“I remember when we were at the BRITs doing the ABBA tribute, it was just before Kylie exploded again with Spinning Around. She was there on her own with one other person. No one was bothering her and I went to chat with her… and I have a picture with her doing Tragedy, yes!”

Lisa quips “she should be so lucky!” about the possibility of a duet, referencing Kylie’s 1988 chart-topping single, before revealing she met Kylie for the first time just before lockdown.

“She was my last concert I went to before lockdown - she played Dubai,” explains Lisa. “We shared a lot of the same team and the same stylist. I met her backstage and she was a little bit smaller than me, I was like ‘YAY!’. She was lovely.”

Claire recalls when Steps appeared with Kylie on Chums - a parody of US sitcom Friends with Ant & Dec and Cat Deeley on SMTV, adding: "She was one of my first albums."

Now that BMG are involved in the selection process for the UK’s entry into the Eurovision Song Contest, would Steps ever consider representing at the competition?

“It’s a yes from me,” proclaimed H, before Lisa put her foot down: “And it’s a no from us!” H set the story straight by saying that as a collective they wouldn’t do it, “because it’s not a song contest now, it’s a political forum.”

However, Claire seemed more open to the idea, adding: “If it were ever an option, we would have to go into thinking we’re not going to win and it’s just for the experience. At the end of the day millions of people watch it and if you want to sell an album throughout Europe, it gives you that opportunity.”

Steps' new album What The Future Holds is released on November 27. Steps tour the UK in November and December 2021. Tickets are on sale now.