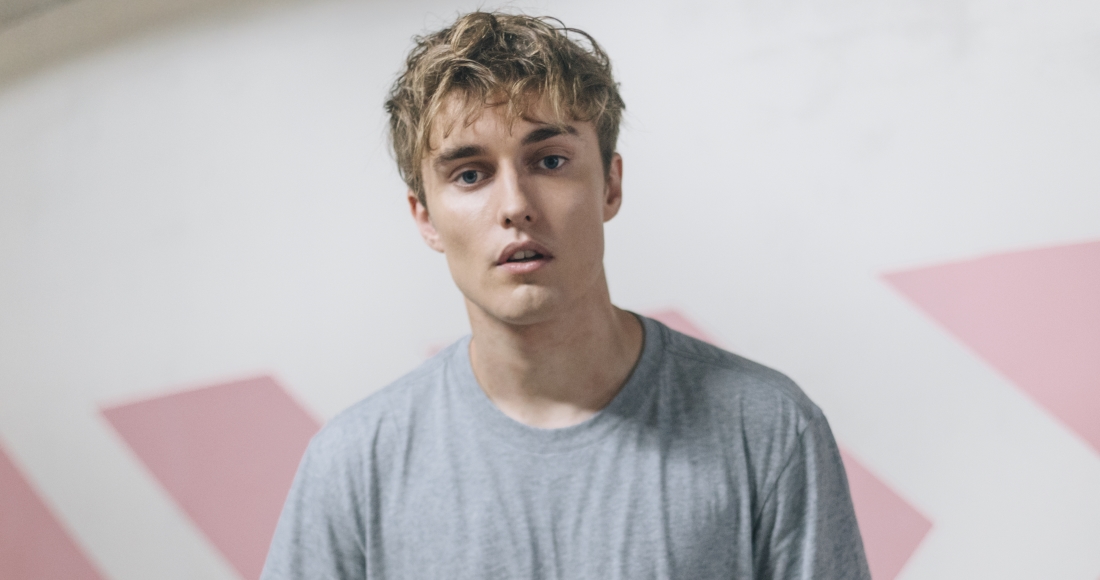 It's been a whirlwind of a year for Sam Fender. The Geordie singer has gone from playing 300-capacity venues to rubbing shoulders with some of the biggest names on the planet in less than 12 months - but he's certainly not letting it go to his head.

We catch up with him over a cuppa, the morning after the GQ Awards where, he says, Stormzy made a beeline for them.

“He’s genuinely like a superhero – I’m 6’1 and I feel like a child next to him," Sam gushes. "He’s just a gentleman. A God amongst men. He’s a sweetheart. He’s almost as important [to the UK] as Kendrick Lamar is to America. I’m so excited to see where he’s going to be in ten years. I think he’ll be at legend level if he keeps pumping out tunes as good as what he’s done already.”

Between winning the 2019 BRITs Critics’ Choice Award and selling out his home city’s most popular venue four times over, Sam has been working overtime to keep the momentum building ahead of the release of his debut album Hypersonic Missiles.

Frustratingly, after rupturing his vocal cords and narrowly avoiding surgery, he had to take a month off, cancelling tour dates and festival appearances, and delaying the album’s release.

“I had two weeks of silence,” he explains, “two weeks of video games and good food. I didn’t leave the house really. It was quite a dark time but coming out of it was humbling and it’s made me really appreciate my job.”

Now Sam is back on form, armed with a nebuliser to keep his cords in top condition, and a new mantra that you don’t need to drink to enjoy events "when you’ve got Stormzy wrapped around you calling you a Bad Boy.”

I saw you at London’s Omeara just last year – and now you’re about to play two Brixton Academy shows, and four sold out nights at Newcastle Academy.

You had to keep adding more and more Newcastle shows!

"It was just surreal. The funniest thing is we could have probably put on another four because we sold those four out like that. I kind of had to stop because we need somewhere to go after that…"

There's been a huge build-up to the album, how would it feel if you got Top 5?

"It would be mental. Even better if we got Number 1 - if we get Number 1 I said I’m gonna jump in the Tyne."

Much of the album is about identity and your experiences growing up, as well as more recent issues...

"Hypersonic Missiles as an album isn’t very cohesive sonically because I wrote it over six years. There are songs from when I was nineteen, to songs like White Privilege which was written two weeks before I finished the album. I just slipped it in - I can’t have a song about Brexit and not release it this year! It’s about the duality of politics that’s going on, what it is to have white privilege, and how that has affected my life.

"Once upon a time I was skint living in a flat with my Mam, we couldn’t afford the rent and it was tough. Now I’m financially secure, I’m a white man in a band, and there’s a lot of realisation about how that potentially affected my career: Would my career be different if I was black and female? Probably. I think I’m just as sick as everybody else of seeing white boys with guitars – but it’s different if they’ve got something to say - hopefully I’m excused!

"I think it’s a classic debut in the sense that it showcases all these different sides of me from when I was first discovered to now. With The Borders you can hear where we’re going, and I think that’s what makes it special. I’m hoping that it has that diversity and grace that – I’m not comparing myself to him, but he is a hero – Jeff Buckley had, where there’s everything from Eternal Life which was a proper rock song, to Corpus Christi Carol which is a really sweet, crazy, angelic, biblical-sounding thing.

"I feel like we’ve done that, with Hypersonic Missiles and The Borders being like these Heartland Rock songs that could be Bruce Springsteen B-Sides, to White Privilege which is almost like a gospel, spoken-word thing, to Call Me Lover which is a pop song I wrote when I was 19. I think we’ve done a decent job. I’m excited to carry on recording! We’ve got 25 songs for the second album, so we’re ready to go.

"I’ve found out that I write on tour maybe better than when I’m at home, cause when I’m home I just get pissed. If I’ve got any time off I just eat loads of food, see my Gran and get mortal."

Do you need to be inspired or can you just sit yourself down and say, 'I need to get a song done'?

"I try most days to fish for songs, and sometimes if you’re lucky you’ll catch a f**king amazing song. It does feel like my best songs just fall out the sky."

Do you feel a responsibility to be a role model?

"There’s a level of responsibility in the sense that I’ve got to be sincere as much as possible, but I don’t think so. I put stuff in layman’s terms. I’m a normal guy, I’m from Shields - it doesn’t get more box average, working class white town. We’re proper rednecks."

Is it important to you to represent the North East?

"It's important to know where you come from. I’ve met a lot of people who get a bit of success and get self-conscious or ashamed of where they’re from when they’re ascending because they don’t fit in. That’s one thing I noticed when we started getting famous – the small amount of fame that we are experiencing is mind-boggling, so I cannot even imagine how people like Stormzy or (Lewis) Capaldi feel - you’re instantly different, you instantly know that you don’t fit in with most of these people.

A majority of the other people I see in the industry are middle-class, so I think that can alienate you and put pressure on you to tone your accent down or accommodate your language to make you fit in more and I say, “f**k that like, I’m a Geordie.”

"If I put it in my branding it’s a constant reminder that home is behind us. People care. The majority of people in Newcastle are really buzzing - they love us - and when your town’s behind you, you feel literally invincible."

Your band is made up of your friends rather than session musicians, isn't it?

"I didn’t want a bunch of professionals I didn’t know. I wanted a bunch of amateurs that I liked! They’re not amateurs though, these boys are better than any session player you’ll get.

"I believe in my project; all of it is homemade. We’ve worked very f**king hard for it and proven that the old-school way works. You have to have that equation of talent + work + luck. We’ve had a lot of luck, and we’re aware of that, but also in our team there’s a lot of f**king hard grafters. There’s a lot of extremely talented people working for this.

"The name Sam Fender is 20 people. I write all the tunes, my dish is on the f**king [posters] but there’s a whole squad who help me put it out to people. Everybody at the label’s amazing too because they believe in it. It’s like that Lady Gaga interview, “It only takes one person…” and it really does. Belief is contagious. When music is good and it speaks to people on a level which ours has, it’s contagious. And its f**king beautiful. We’ve been so, so lucky, and we’re gonna ride it ‘til the wheels come off."

What’s the most unbelievable thing that’s happened in the last six months?

"Going for dinner at Elton John’s house. Me, Elton, David Furnish and the CEO of Universal, David Joseph; just the four of us went and had dinner in his mansion in Windsor. I had a go on his piano, and then Elton was like “I love the album!” and said I could use the house whenever I want to record and write, or just have a break.

"I went for tea with Steven Van Zandt, Bruce Springsteen’s guitarist, and then he got me up on stage. It’s manic."

Hypersonic Missiles is out now.