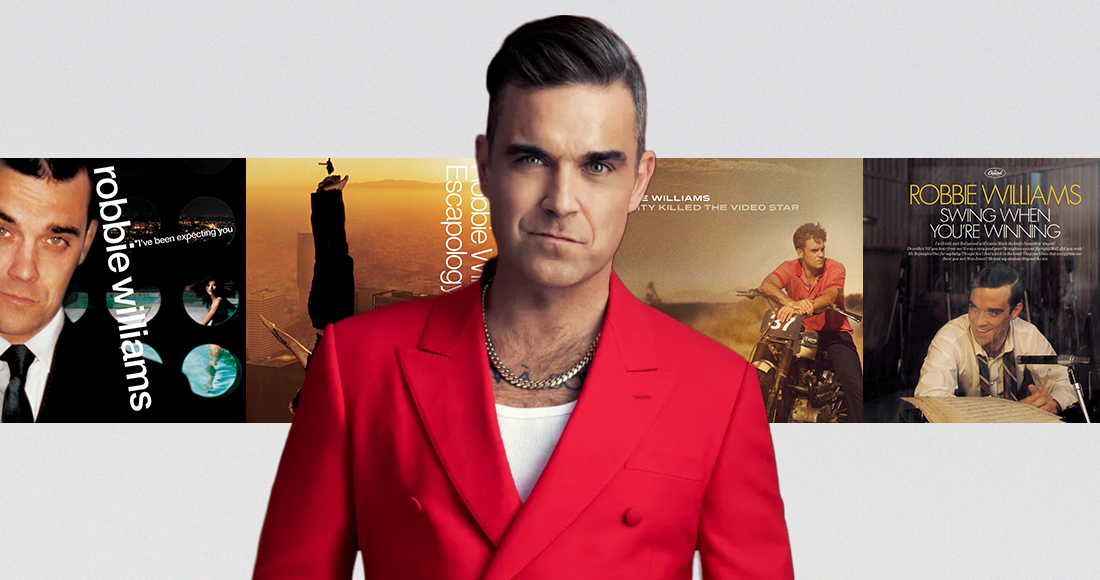 As we discussed earlier this week, Robbie Williams is Britain's ultimate pop showman in chief, and he's celebrating 25 years since the start of his solo career with the new career retrospective XXV.

Currently leading the charge to debut at Number 1 on the Official Albums Chart, XXV contains some of Robbie’s best-loved hits, newly-orchestrated and recorded with the Metropole Orkest.

Now that we've revealed Robbie's biggest singles in the UK, it's time now to turn our eyes to his albums.

To date, Robbie has 13 UK Number 1 albums to his name - the most for any British solo artist, and he's currently tied with Elvis Presley. Only The Beatles have more, with 15.

Debut albums can be a pressure cooker, but you'd have been forgiven for forgetting that Robbie ever sweated his first album since leaving Take That.

Indeed, Life Thru A Lens' focus on a Brit-pop sound is a curveball most weren't certainly expecting, but then again, who's going to argue against Angels?

Robbie's third album came to fruition after he tried (and famously failed) to crack America in 1999. Still, although Stateside superstardom had evaded him, he re-grouped with frequent collaborators Guy Chambers and Steve Power to re-assert his dominance back home.

And re-assert he did. Sing When You're Winning contained five UK Top 10 singles; including Number 1 singles Rock DJ and Eternity (which wasn't originally included on the tracklist) and his high-throttle duet with Kylie Minogue, Kids.

What do you do when you're at the very apex of your solo career and the undisputed biggest pop star in the country? Release an album of jazz covers, obviously.

One of the biggest swings (sorry) of Robbie's career, his fourth album contained another Number 1 single in the form of Somethin' Stupid with Nicole Kidman and proved to be so successful that he would revisit the form with a sequel record, Swings Both Ways, in 2013. To date in 2022, Swing When You're Winning is Robbie's third biggest-seller here, but his most digitally downloaded album overall (over 94,000 units).

Coming from a time when greatest hits collections were big, big business, Robbie's first chance to reflect on the first phase of his solo career was a tour-de-force. Containing a Number 1 single (Radio), it may come in second place overall, but it contains the most album streams of any Robbie Williams in the UK.

There were no signs of difficult second album syndrome on I've Been Expecting You. Not only did the single Millennium finally give Robbie the solo Number 1 single he'd been desperate for, it contains some of the most popular songs of his career, included guaranteed tear-jerker She's The One.

Overall, I've Been Expecting You comes out on top as Robbie's most popular album in the UK. It has total chart units registering more than 2.6 million, and is also his most physically-purchased record, with more than 2.5 million physical units sold.